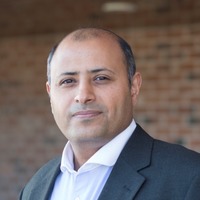 Tawfik Al-Hadhrami is currently working as a Senior Lecturer at Nottingham Trent University, UK. He received his MSc degree in IT/Applied System Engineering from Heriot-Watt University, Edinburgh, United Kingdom. He received his PhD degree in Mesh Communication and IoT from the University of the West of Scotland, Glasgow, UK, 2015. He was involved in research at the University of the West of Scotland, Networking Group. He is an Associate Editor for IEEE Access, PeerJ computer Science, Frontiers in Communications and Networks (IoT and Sensor Networks) and International Journal of Cyber Forensics and Advance Threat Investigations journals. His research interest includes the Internet of Things (IoT) and Applications, Data Science, Network Infrastructures & Emerging Technologies, Artificial Intelligence, Computational Intelligence and 5/6G Wireless Communications. He has established collaboration with the different international institutions over the world. He is a member of the Network Infrastructure and Cyber Security group (NICS) at NTU. He is involved in different projects with industries.