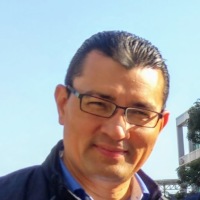 Vicente Alarcon-Aquino received his Ph.D. and D.I.C. degrees in Electrical and Electronic Engineering from Imperial College London, London, U.K. in 2003. He is currently a full Professor and former department head in the department of computing, electronics, and mechatronics at the Universidad de las Americas Puebla, Mexico. In 2017, he spent a short-term research stay as a Visiting Senior Research Fellow in the Department of Informatics at King's College London, UK. He has authored over 180 research articles in several refereed journals and conference proceedings, has written a book on MPLS networks, and has several citations to his research articles. He has served as Guest Editor for the Journal of Universal Computer Science, and is currently acting as an Associate Editor for IEEE Access Journal and as an Academic Editor for PeerJ Computer Science. He is a Senior Member of IEEE, belongs to the Mexican National System of Researchers, and has been elected to membership of the Mexican Academy of Sciences. His current research interests include cybersecurity, network monitoring, anomaly detection, wavelet analysis, and machine learning.