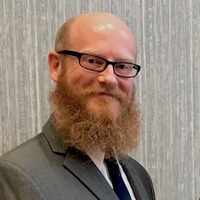 Erik Seiffert's research is focused on the phylogenetic relationships, adaptations, and historical biogeography of mammals, with an emphasis on the endemic placental mammals of Africa and Arabia. He has a B.A. from the University of California at Berkeley (1995), an M.A. from the University of Texas at Austin (1998), and a Ph.D. from Duke University (2003). He was previously Lecturer in Palaeobiology and Palaeoenvironments at University of Oxford and Curator of Geological Collections at the Oxford University Museum of Natural History (2004-2007), Assistant and Associate Professor of Anatomical Sciences at Stony Brook University (2007-2016), and is now a Professor of Integrative Anatomical Sciences at the Keck School of Medicine of the University of Southern California (2016-Present). He is also a Research Associate at the Duke Lemur Center's Division of Fossil Primates and in the Department of Mammalogy, Natural History Museum of Los Angeles County.

University of Southern California
July 2016
Integrative Anatomical Sciences
I am broadly interested in the phylogenetic relationships, adaptations, and historical biogeography of mammals. My research is now focused largely on fossil mammals from the Eocene and Oligocene of Africa. In particular, late Eocene faunas from Egypt have provided important insights into the early evolution of anthropoid strepsirrhine primates, and also document primitive relatives of living hyraxes, elephants, sengis, tenrecs, various bat and rodent clades, and entirely extinct clades such as Hyaenodonta and Ptolemaiida. Much of this work has been undertaken in collaboration with my current and former doctoral students, and has been funded by the U.S. National Science Foundation and The Leakey Foundation.