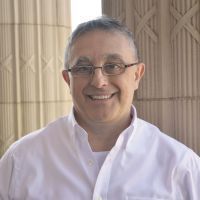 My laboratory is centered on understanding the function(s) of RNAs, especially non-coding RNAs in all aspects of Biology. The long term objective of our work is to understand meiotic silencing in Neurospora and to map its connections with the meiotic silencing observed in other organisms.

Texas A&M University
Biology
The main subject of my research is to understand how Information is organized, distributed and compared in Biological Systems. We are specially fascinated by the possibility that the information present in DNA, RNA and Proteins can be digitalized. The process of converting information (i.e., different biological features) into their digital equivalents has the potential, we hypothesize, of simplifying the genome information as to allow us to uncover previously undetected informational patterns, while performing these complex computational comparisons with little effort. We call this new field: Digital Biology. To test the viability of Digital Biology, we have recently developed a series of computational algorithms aimed at extracting and classifying the informational content present genomes (i.e., extracting their informasomes). Once digitalized, informasomes can then be easily compared in a computationally-efficient manner. Digital Biology offers a new way to re-analyze an old problem, while potentially uncovering previously undetected informational patterns. It allows for the study of evolution from an informational-, not sequence-based point of view. This approach, has already allowed us to detect unexpected informational patterns present in the chromosomes of all organisms. We believe that this approach will both simplify and amplify our ability to understand not only genome evolution, but also the field of comparative genomics. Although our initial work is being performed with animal genomes, we plan on to extend this powerful approach to the analysis of fungal, plants, and bacterial genomes. Our Digital Biology work ideas emerged from my discovery of Meiotic Silencing in Neurospora crassa. Meiotic Silencing, are one of the most unusual, amazing and intriguing mechanisms observed in meiotic cells of eukaryotic organisms. Meiotic Silencing compares the information present in opposite homologous chromosomes in meiosis. Here, if a DNA segment is absent or highly mutated on the opposite homologous chromosome, the resulting "unpaired" DNA segment is targeted for silencing. This triggers the generation of small RNAs with homology to the affected region. These small RNAs, in turn, proceed to destroy mRNAs that have homology to the “unpaired” DNA region. Unpairing DNA can be the result an insertion of a DNA element at a particular chromosomal position (e.g., a situation akin to the "invasion" of a genome by transposable DNA elements). Alternatively, it can also occur when a normal region gets deleted. In both situations, the resulting "loop" or "region" of "unpaired" DNA seems to activate a genome-wide "alert" system that results in the silencing not only of the genes present in the "unpaired" DNA segment, but also of those same genes if present elsewhere in the genome, even if they are in a "paired" symmetrical condition. Although Meiotic Silencing was originally described in Neurospora crassa, it has since also been observed in nematodes and mammals. In all these organisms, "unpaired or unsynapsed" regions (or chromosomes) are targeted for gene silencing. Our working hypothesis is that meiotic silencing is a two-step process. First meiotic trans-sensing compares pairing chromosomes (by an unknown mechanism) and then identifies significant differences as unpaired DNA. Second, if an unpaired DNA region is identified, then a process called meiotic silencing silences expression of genes within the unpaired region and regions sharing sequence identity. We are using a combination of genetics, molecular biology and biochemistry aimed at identifying all the molecular players of the process and at understanding how they work together. The long term objective of our work is to understand Meiotic Silencing not only in Neurospora, but also, to map its connections with the meiotic silencing observed in other organisms. In summary, I am an expert in Genetics and Genomics, with major emphasis in fungal genetics and epigenetics. In addition, I also have substantial training and understanding of Computational Genomics and computers in general. I bring this combined ability not only to my own research program, but also, to my undergraduate and graduate teaching.