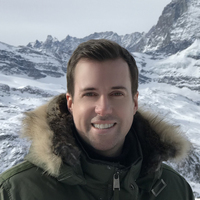 After graduating top of his year in Natural Sciences at the University of Cambridge, Rob obtained his PhD in 2008 with Jonathan Goodman in Cambridge working on the automated parameterization of molecular mechanics methods to study stereoselective C-C bond formation. In 2008 he took up an independent Junior Research Fellowship at St Catharine’s College, Cambridge, and courtesy of an HPC-Europa award in 2009 spent time in the group of Feliu Maseras at ICIQ, Spain.

As recipient of the UK’s’ Fulbright-AstraZeneca Fellowship and a Science Fellowship from the Royal Commission of the Exhibition of 1851, Rob conducted postdoctoral research with K. N. Houk at the University of California, Los Angeles from 2009-2010. In 2010 Rob was appointed to a University Lectureship and Tutorial Fellowship at Oxford, progressing to Associate Professor in the Department of Chemistry in 2014. In 2018 he moved to Colorado State University as an Associate Professor. Rob has received the MGMS Silver Jubilee Prize, the RSC Harrison-Meldola Memorial Prize and an ACS OpenEye Outstanding Junior Faculty Award.