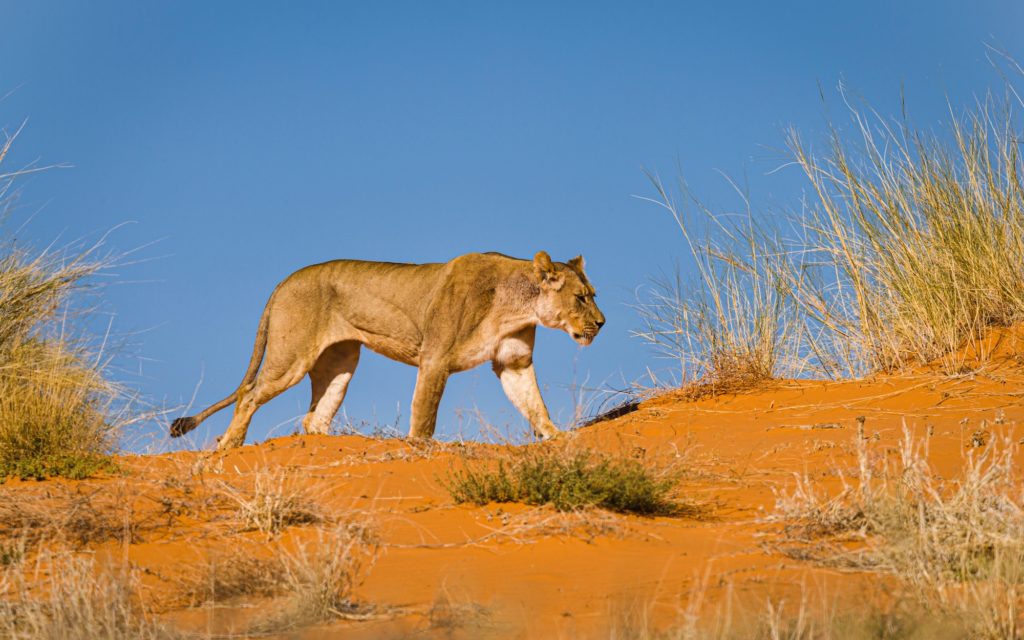 A new study by Paolo Strampelli and colleagues from the University of Oxford, the University of KwaZulu-Natal, Endangered Wildlife Trust, South Africa and Panthera published in PeerJ Life & Environment  provides the first systematic review of African large carnivore population assessments published over the last two decades (2000-2020), to investigate trends in research effort and identify knowledge gaps. The article is a timely review for a very important conservation topic, and provides an informed broad-scale framework for decision-making that is currently lacking in the field of large carnivore research in Africa – to guide funding, research investment, and priorities.

“Research effort is significantly biassed towards lions (Panthera leo) and against striped hyena (Hyaena hyaena), despite the latter being the species with the widest continental range. African wild dogs (Lycaon pictus) also exhibited a negative bias in research attention, although this is partly explained by its relatively restricted distribution,” write the authors. “Our findings highlight the urgent need for additional cheetah population assessments, particularly in northern, western, and central Africa. Due to their large country ranges, studies in Chad and Ethiopia should especially be considered a priority.”

African large carnivores have undergone significant range and population declines over recent decades. Although conservation planning and the management of threatened species requires accurate assessments of population status and monitoring of trends, there is evidence that biodiversity monitoring may not be evenly distributed or occurring where most needed.

Researchers from the University of Oxford, the University of KwaZulu-Natal, Endangered Wildlife Trust, South Africa and Panthera used generalised linear models and generalised linear mixed models to identify taxonomic and geographical biases in previously published research into large carnivores in Africa, and also uncovered biases associated with land use type and author nationality.

Population assessments have been biassed towards southern and eastern Africa, particularly South Africa and Kenya. Northern, western, and central Africa are generally under-represented. Most studies have been carried out in photographic tourism protected areas under government management, while non-protected and trophy hunting areas received less research attention.

The authors developed recommendations for actions aimed at overcoming the identified biases and provide researchers, practitioners, and policymakers with priorities to help inform future research and monitoring agendas.

Reducing the identified geographical and taxonomic biases in population assessments would help ensure that all species and areas of conservation importance have an adequate knowledge base available, with the potential to improve their conservation outlook.

Geographical biases in research and assessments are immediate hurdles for science-based conservation management of African large carnivores. As a result, northern, western, and central Africa should be considered priority regions for future research.

Increased attention should in particular be given to the twenty-six countries which currently lack any published estimates, especially Angola, DRC, South Sudan, and Chad, given their considerable large carnivore country ranges and their potential importance for the conservation of these species.

Building capacity of researchers and practitioners in large carnivore survey and monitoring techniques in under-represented areas should be a priority. The fact that only 59% of studies outside of South Africa included a co-author from the study country reinforces suggestions that research in developing countries is disproportionately led by scientists from more developed areas, and shows there is considerable need for such capacity building efforts.

Donors and foreign researchers should maximise the involvement of local scientists, students, and practitioners in future assessments, including through capacity building initiatives such as the provision of training, funding, and equipment. Conservation donors and funders should encourage efforts in understudied regions, as well as for understudied species, to ensure that conservation research occurs where it is most needed.

Urgent need for additional cheetah population assessments, particularly in northern, western, and central Africa. Due to their large country ranges, studies in Chad and Ethiopia should especially be considered a priority. As in the case of African wild dog, development and standardisation of cheetah population monitoring techniques, including the exploration of citizen-science based approaches, are recommended.

Read this and more in the Biodiversity and Conservation Section.