For a recent analysis by our group, we wanted to systematically enumerate GLY-X-GLY tripeptides in all allowed conformations (Tien et al., 2012). After review of the available software packages, we determined that there was a need for a lightweight library, implemented in a modern programming language, that would allow us to construct arbitrary peptides in any desired conformation. We decided to write this library in the language Python (Python Sofware Foundation, 2013), as this language is widely used in scientific computing. Specifically, many tools suitable for computational biology and bioinformatics are available (Cock et al., 2009), including tools to read, manipulate, and write PDB (Protein Data Bank) files (Hamelryck & Manderick, 2003). This effort resulted in the Python library PeptideBuilder, which we describe here. The library consists of two Python files comprising a total of approximately 2000 lines of code. Both files are provided as Supplemental Information 1. The entire PeptideBuilder package is also available online at https://github.com/mtien/PeptideBuilder.

The key function our library provides is to add a residue at the C terminus of an existing polypeptide model, using arbitrary backbone angles. Our library also allows a user to generate an individual amino acid residue and place it into an otherwise empty model. In combination, these two functions enable the construction of arbitrary polypeptide chains. The generated models are stored as structure objects using the PDB module of Biopython (Bio.PDB, Hamelryck & Manderick 2003). The seemless integration with Biopython’s PDB module means that we can leverage a wide range of existing functionality, such as writing structures to PDB files or measuring distances between atoms.

Adding a residue to an existing polypeptide chain involves two separate steps. First, we have to establish the desired geometric arrangement of all atoms in the residue to be added. This means we have to determine all bond lengths and angles. In practice, we will usually want to specify the dihedral backbone angles ϕ and ψ, and possibly the rotamers, whereas all other bond lengths and angles should be set to reasonable defaults for the amino acid under consideration. Once we have determined the desired geometry, we have to calculate the actual position of all atoms in 3-space and then add the atoms to the structure object. The exact calculations required to convert bond lengths and angles into 3D atom coordinates are given in the supporting text of Tien et al. (2012). Our library places all heavy atoms for each residue, but it does not place hydrogens.

We selected ten proteins with solved crystal structure. The proteins were chosen to represent a diverse group of common folds. For each protein, we then attempted to reconstruct the backbone of either the first 50 residues in the structure, the first 150 residues in the structure, or the entire structure. In all cases, we extracted backbone bond lengths and angles at each residue, and then reconstructed the protein using four different methods. When placing each residue, we either (i) adjusted only the extracted ϕ and ψ dihedral angles, (ii) adjusted ϕ, ψ, and ω dihedral angles, (iii) adjusted all dihedral and planar bond angles, or (iv) adjusted all bond lengths and angles exactly to the values measured in the structure we were reconstructing. In each case, any remaining parameters were left at their default values.

As expected, when we set all bond lengths and angles to exactly the values observed in the reference crystal structure, we could reconstruct the entire backbone with an RMSD close to zero. We did see an accumulation of rounding errors in longer proteins, but these rounding errors amounted to an RMSD of less than 0.01 Å even for a protein of over 600 residues. Hence they are negligible in practice. By contrast, reconstructions relying on just backbone dihedral angles performed poorly. We found that we had to adjust all backbone bond angles, inlcuding planar angles, to obtain accurate reconstructions. Bond lengths, on the other hand, could be left at their default values. Table 1 summarizes our findings for all 10 structures, and Fig. 1 shows the results of the four different methods of reconstruction for one example structure. The python script to generate these reconstructions is provided as part of Supplemental Information 1.

Our results show that the PeptideBuilder software correctly places all atoms at the desired locations. However, they also demonstrate that one needs to be careful when constructing longer peptides. It is not possible to construct an entire protein structure just from backbone dihedral angles and expect the structure to look approximately correct. In particular in tight turns and unstructured loops, small deviations in backbone bond angles can have a major impact on where in 3D space downstream secondary structure elements are located. Hence these angles cannot be neglected when reconstructing backbones.

PeptideBuilder has one dependency beyond a default python installation, the Biopython package (Cock et al. 2009, http://biopython.org/), which provides the module Bio.

Let us consider a simple program that places 5 glycines into an extended conformation. First, we need to generate the glycine geometry, which we do using the function Geometry.geometry(). This function takes as argument a single character indicating the desired amino acid. Using the resulting geometry, we can then intialize a structure object with this amino acid, using the function PeptideBuilder.initialize_res(). The complete code to perform these functions looks like this:

We now add four more glycines using the function PeptideBuilder.add_residue(). The default geometry object specifies an extended conformation (ϕ = −120∘, ψ = 140∘). If this is the conformation we want to generate, we can simply reuse the previously generated geometry object and write:

Because PeptideBuilder stores the generated peptides in the format of Bio.PDB structure objects, we can use existing Bio.PDB functionality to write the resulting structure into a PDB file:

If we want to generate a peptide that is not in the extended conformation, we have to adjust the backbone dihedral angles accordingly. For example, we could place the five glycines into an alpha helix by setting ϕ = −60∘ and ψ = −40∘. We do this by manipulating the phi and psi_im1 members of the geometry object. (We are not actually specifying the ψ angle of the residue to be added, but the corresponding angle of the previous residue, ψi−1. Hence the member name psi_im1. See the Detailed adjustment of residue geometry Section for details.) The code example looks as follows:

Several convenience functions exist that simplify common tasks. For example, if we simply want to add a residue at specific backbone angles, we can use an overloaded version of the function add_residue() that takes as arguments the structure to which the residue should be added, the amino acid in single-character code, and the ϕ and ψi−1 angles:

If we want to place an arbitrary sequence of amino acids into an extended structure, we can use the function make_extended_structure(), which takes as its sole argument a string holding the desired amino-acid sequence:

Table 2 summarizes all functions provided by PeptideBuilder. All these functions are documented in the source code using standard Python self-documentation methods.

Geometry objects contain all the bond lengths, bond angles, and dihedral angles necessary to specify a given amino acid. These parameters are stored as member variables, and can be changed by assignment (as in geo.phi=-60). We use a uniform naming scheme across all amino acids. Member variables storing bond lengths end in _length, those storing bond angles end in _angle, and those storing dihedral angles end in _diangle. For example, CA_N_length specifies the bond length between the α carbon and the backbone nitrogen, and CA_C_O_angle specifies the planar bond angle between the α carbon, the carbonyl carbon, and the carbonyl oxygen. All bond lengths are specified in units of Å, and all angles are specified in degrees.

A geometry object stores the minimum set of bond lengths, bond angles, and dihedral angles required to uniquely position every heavy atom in the residue. Additional bond angles remain that are not used in our code; these bond angles are defined implicitly. The simplest way to determine which bond lengths and angles are defined for a given amino acid is to print the corresponding geometry object. For example, entering the command print Geometry.geometry("G") on the python command line produces the following output: 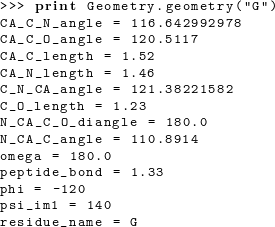 The following code prints out the default geometries for all amino acids:

We can construct modified geometries simply by assigning new values to the appropriate member variables. For example, the following code constructs a Gly for which some bond lengths and angles deviate slightly from the default values:

For amino acids whose side chains require specification of rotamer conformations, there are two ways to specify them. First, we can set rotamers by directly assigning the appropriate values to the correct dihedral angles:

Second, we can set all rotamer angles at once, using the member function inputRotamers():

In this function call, the angles are listed in order of standard biochemical convention, χ1, χ2, χ3, and so on, for however many χ angles the amino-acid side chain has.

We have developed a Python library to construct model peptides. Our design goals were to make the library simple, lightweight, and easy-to-use. Using our library, one can construct model peptides in only a few lines of Python code, as long as default bond lengths and angles are acceptable. At the same time, all bond-length and bond-angle parameters are user-accessible and can be modified if so desired. We have verified that our library places atoms correctly. As part of this verification effort, we have found that with increasing peptide length it becomes increasingly important to adjust bond angles appropriately to reconstruct biophysically accurate protein structures.

PeptideBuilder: A simple Python library to generate model peptides
PDF Save to Mendeley Read in ReadCube RIS XML BibTeX
Your download will start in a moment...
Close
Subscribe for subject updates
Close
Cancel

"Following" is like subscribing to any updates related to a publication. These updates will appear in your home dashboard each time you visit PeerJ.

You can also choose to receive updates via daily or weekly email digests. If you are following multiple publications then we will send you no more than one email per day or week based on your preferences.

Note: You are now also subscribed to the subject areas of this publication and will receive updates in the daily or weekly email digests if turned on. You can add specific subject areas through your profile settings.