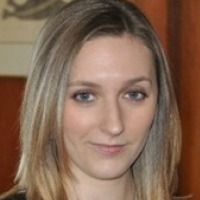 Stephanie E. Pierce is a trained paleontologist, anatomist, functional morphologist and evolutionary biomechanist. She completed a BSc degree in paleontology at the University of Alberta, Canada, which included an honors thesis on the anatomy and evolution of hadrosaurian dinosaurs. Directly following this, Stephanie pursued a MSc degree by research in Systematics and Evolution at the University of Alberta studying the anatomy and evolutionary relationships of extinct marine lizards. Her love of vertebrate evolution brought her to the University of Bristol, UK where she embarked on a PhD degree which focused on assessing the interplay between skull shape variation and biomechanical performance in extant and extinct crocodiles. Since finishing her studies, Stephanie has focused her main efforts on examining and reconstructing the 3D anatomy and locomotion potential of early tetrapods (Devonian and Carboniferous) to test hypotheses of limbed movement across the water-land transition.