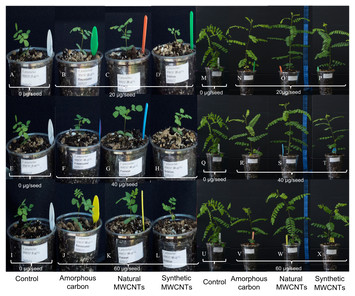 Walter de Azevedo Jr. –– In this work by Juárez-Cisneros et al., the authors investigate multi-walled carbon nanotubes in nature after forest fires have been documented. The authors showed that natural multi-walled carbon nanotubes promoted fresh and dry biomass in all applied treatments investigated in the present study. Their results strongly indicated that multi-walled carbon nanotubes produced by wildfire act as plant growth promoters. This nanomaterial contributes to the germination and development of adapted to fire-prone conditions species such as “E. polystachya”. This study was conducted in an especially important time due to increasing awareness related to forest fires in the Amazon region and in Australia. This situation is particularly grave in the Amazon region. In the last year (2019), forest fires reached record levels as Brazil's government fails to block the deforestation that drives the country's high rate of emissions. Studies such as the one here reported are important to increase our knowledge of the forest fires, which may contribute to reforestation projects and the handling of unavoidable fires related to cyclic events.
16 October 2019
Transcriptome analysis of the induction of somatic embryogenesis in Coffea canephora and the participation of ARF and Aux/IAA genes
Ana O. Quintana-Escobar, Geovanny I. Nic-Can, Rosa María Galaz Avalos, Víctor M. Loyola-Vargas, Elsa Gongora-Castillo

Luis Eguiarte –– Gunnera is a genus of plants that have fascinated scientist for a long time, in particular for the very large leaves of some species and because its symbiotic relationship with the nitrogen fixing cyanobacteria Nostoc. For a many years, some botanists suspected it to be a very old, primitive genus, perhaps basal in the phylogeny of the Angiosperms. While latter molecular phylogenies did not support this position, this paper shows that indeed Gunnera is an old genus, with a complex evolutionary and phylogeographic history, and a recent radiation in the Andes. All these new results are relevant for understanding why the Neotropics have so many plant species, more than any other similar region in the planet.
23 January 2018
Molecular phylogenetics of swimming crabs (Portunoidea Rafinesque, 1815) supports a revised family-level classification and suggests a single derived origin of symbiotic taxa
Nathaniel Evans

Average h-index of Editorial Board: 41

Why not C. arabica