Changes to bio-oceanographic conditions can trigger devastating mortality events for marine mammals. In March 2015, by far the largest reported mass mortality of baleen whales took place in a gulf in Southern Chile. In a recent research study published in PeerJ, researchers show that the synchronous death of at least 343 primarily sei whales can be attributed to harmful algal bloom during a building El Niño. We spoke with author Vreni Häussermann about the multi-disciplinary findings and how the team braved extreme winter weather in Patagonia to gather the data. 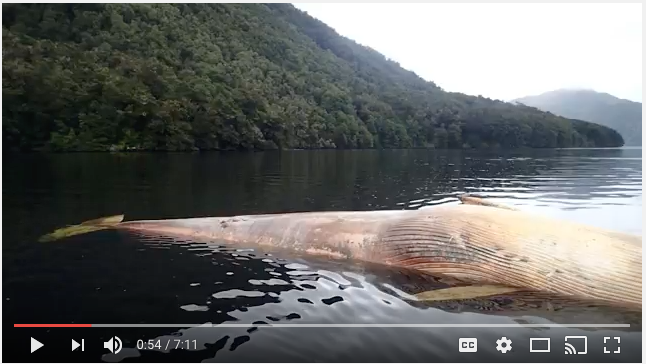 VH: I am the scientific director of the Huinay Scientific Field Station located in the Comau Fjord in Chilean Patagonia. I am in charge of promoting and carrying out multi-disciplinary research that is needed to facilitate conservation and sustainable resource management in this region. I am dedicated to baseline research projects such as species inventories and studies of patterns in biological diversity through space and time.

I was the organizer and main editor of the book Marine Benthic Fauna of Chilean Patagonia, the first marine field guide for multiple groups of organisms in the fjord region. Through my work for the Huinay Foundation, I am active in counselling governmental and non-governmental organisations on conservation and proper marine resource management and bringing research results not only to the scientific community but also to decision makers, industry representatives, fishermen and the broader public.

In 2006, my team developed and submitted a proposal for a marine protected area (MPA) in two fjords with unique cold-water coral banks. In 2017, we are presenting our proposal for a network of MPAs for Chilean Patagonia to the Chilean government. I have contributed to international initiatives such as the Census of Marine Life, the Discover Life program, Mission Blue and Google Ocean. 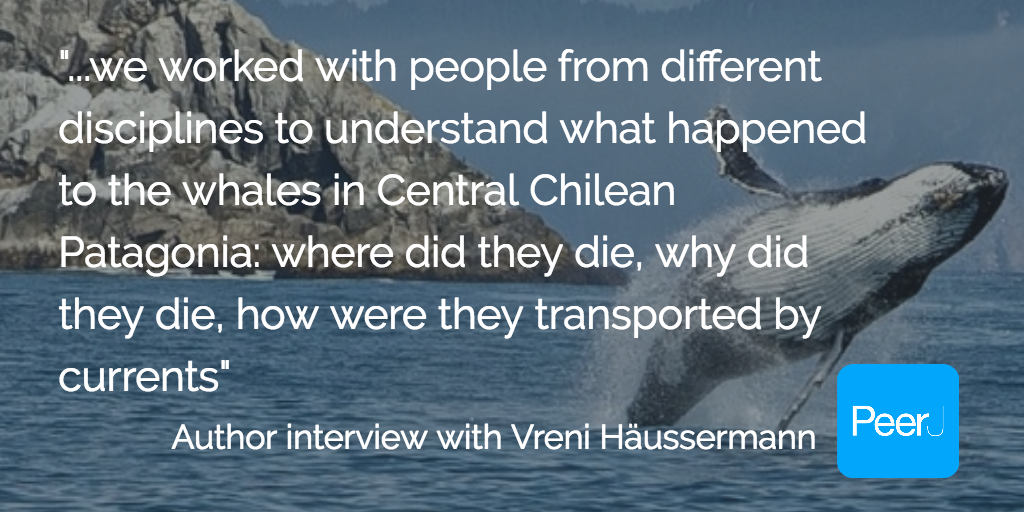 My original research area is Chilean sea anemones. I added cold-water corals, then started studying marine invertebrates in general. We have also published about blue whales and orca in the fjord where we work. And during one of the last expeditions, we discovered the dead whales. I have always amplified my research doing whatever I felt that needed to be attended. There are so many important things going on in Chilean Patagonia and so few people doing baseline research. If nobody else does it, we tackle it.

You can read more about my background here.

VH: The study is a multi-disciplinary one, we worked with people from different disciplines to understand what happened to the whales in Central Chilean Patagonia: where did they die, why did they die, how were they transported by currents etc. (see abstract).

There are two main findings of the study: the first is the discovery of apparently one of the most important feeding areas of sei whales outside the polar region. The second, and perhaps most striking finding is the simultaneous death of around 350 sei whales which marks the largest ever recorded baleen mass mortality event, which can be linked to an intoxication of red tide toxins.

VH: The flight with the little plane was really crazy. It was winter in Patagonia, but some days of good weather were announced. But we had to stop twice already on the way down waiting for the icy fog to lift (with these little planes you fly on sight and cannot start or land in icy fog). The only airport where it is possible to get new fuel was also closed. Luckily we found a private flight club who sold us 200 litres of fuel. 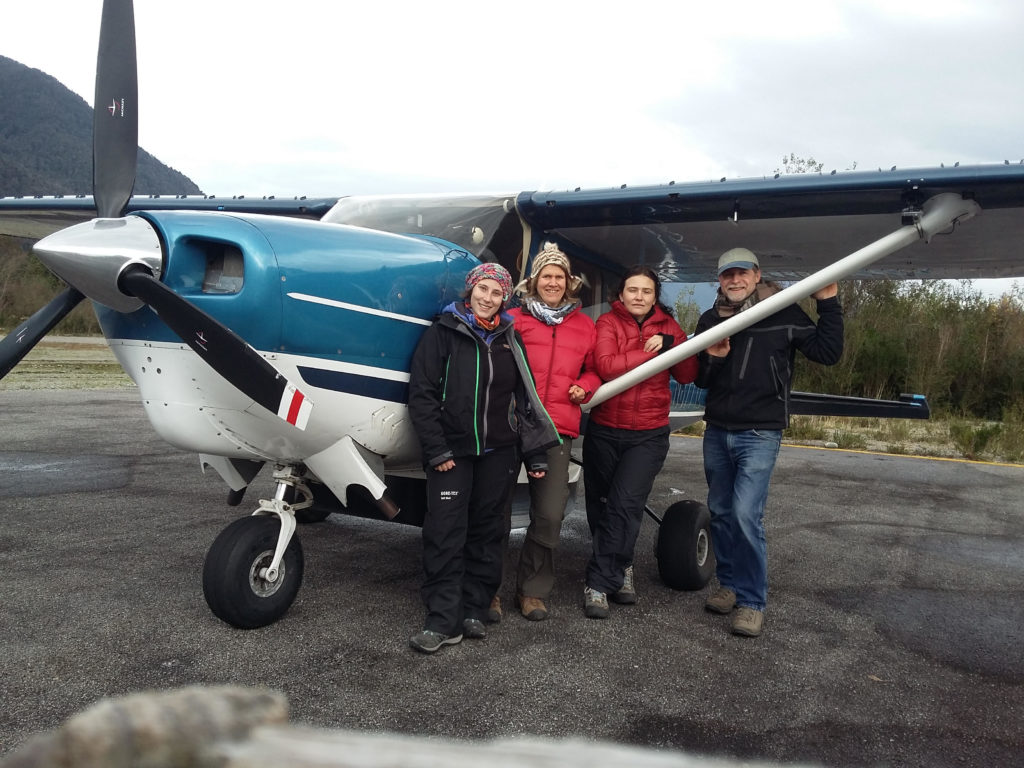 At the evening we finally arrived in Tortel. The next day we had to wait until noon for the weather to be good enough to start, the time we used to meticulously clean the plane from any ice. We started and flew as low and slow as possible, making turns over each dead whale we found. This made us feel like being on a roller coaster. But we had to take photos and GPS data during the flight! After 3 hours flying around Golfo de Penas a bad weather front came in and the little plane was thrown around so badly and it got so dark that we could not take any more focused photos. We just took GPS points and made recordings of what we spoke. Our pilot during the flight always watched out for beaches where he could land in case of emergency. No air strips, no people living anywhere close by.

In Newman Sound more dead whales appeared every second. The student counting the whales with the GPS had to interrupt her counting regularly for being airsick. The whole situation seemed really apocalyptic. Although the whole team was in a state of shock we all stayed totally focused on recording all we could in these crazy conditions. We were all happy to get out of the plane after 5 hours flying in increasingly worrying conditions. Then the bad weather broke in on us and it took us 3 more days to get back to Puerto Montt. We needed to find areas where we could fly along the coast or rivers on sight, but weather conditions were extreme and we had to turn back more than once for security reasons.

VH: We need to keep an eye on the Golfo de Penas region since it is a hot spot of whale diversity. We need to get more information on the whales living there, and check if more mortalities will happen. 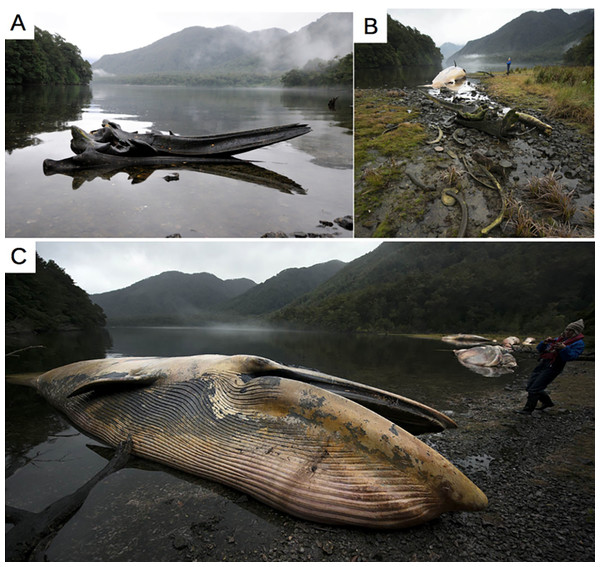 VH: I knew of papers published there and we liked the speed (although in the end, it made no difference since with more than 10 authors, our speed was the limiting factor).