Today we published “Off the scale: a new species of fish-scale gecko (Squamata: Gekkonidae: Geckolepis) with exceptionally large scales” by Mark D. Scherz, Juan D. Daza, Jörn Köhler, Miguel Vences, and Frank Glaw. This article describes a gecko with the largest scales of any known gecko, which also has the ability to shed them with extreme ease. .

To get some of the background to this study, we interviewed Mark Scherz for the PeerJ blog.

Q: Can you tell us a bit about yourself?

I am a PhD candidate working across the two tightly linked working groups of Dr. Frank Glaw (Zoologische Staatssammlung München, ZSM-SNSB) and Prof. Miguel Vences (Technische Universität Braunschweig) in Germany, which are focussed on the reptiles and amphibians of Madagascar. To date, my research has been mainly focussed on the taxonomy of various species complexes, especially microhylid frogs and geckos, but soon I will move into the deeper evolutionary questions of how and why these taxa have diversified in Madagascar.

Q: Can you briefly explain the research you published in PeerJ?

Madagascar has a lot of weird geckos, from the leaf- and bark-mimicking Uroplatus leaf-tailed geckos to the bright and beautiful Phelsuma day geckos. Geckolepis is another really bizarre genus. They are special because they have huge scales that come off with extreme ease, making them hard to catch and harder to study. Until 2013, we thought there were only four or so species in this genus, but then genetic data came out that showed that there are around 13 deep genetic lineages. Now, because these geckos lose scales so easily, it is really hard to work on their taxonomy, so progress has been slow, but one lineage in particular was obviously different, having even larger scales than any other species. We chose to describe this species, which we named Geckolepis megalepis, and to use the opportunity to clear up a few questions surrounding other species. It was especially important to delve into the osteology of the geckos, which we hoped would be more reliable than their easily-lost scales. The new species is from the strange limestone karst formations (‘tsingy’) of northern Madagascar, where it is probably microendemic. The bones of Geckolepis show some surprising characters that are rare or unique among living geckos, but intraspecific variation is quite high, meaning that we will have to proceed carefully with future taxonomic revision drawing on osteological characters. Nevertheless, we hope that we have opened up a new approach to study this group, and to finally have a chance of resolving their taxonomy. 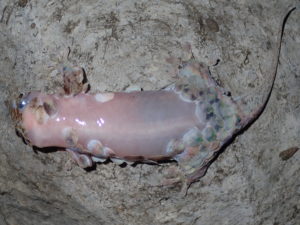 When grasped by a predator, fish-scale geckos lose not just their scales but also the skin underneath. This bizarre behavior is apparently very important in helping them escape. Image credit: F. Glaw

Q: Do you have any anecdotes about this research?

One of the most exciting aspects of this paper is that we have got another whole dataset to help us clear up the identity of some species in the genus. Of particular importance is Geckolepis maculata, a species that was described in 1880 from a single specimen from ‘Anfica’—a place that does not exist today, and that, as far as we can tell, never existed, because its formulation is grammatically incorrect in Malagasy. The genetic study in 2013 assigned a lineage from northern Madagascar to this species, but our skeletal data suggests otherwise—the externally similar species from that region has a very different skull, so is almost certainly not the right thing. That means we were able to more or less rule out one option, and at the same time identify some features that may be the key to describing the next species in the genus. As for the identity of G. maculata… we really still don’t know what it is. But we hope to clear this up in the future with some more osteological data from other lineages.

Q: What kinds of lessons do you hope the public takes away from the research?

Taxonomy is often neither an easy nor a straightforward science. We are constantly making new hypotheses in the form of species names, and increasingly updating old hypotheses by assigning old names to comparatively unambiguous genetic lineages. This is sometimes more difficult than it might seem, and we have to use lots of different methods to produce the most robust hypotheses. This approach means that we are able to produce reliable assignments of species assignment, even when no genetics are available—a valuable thing to be reminded of as biological sciences become increasingly dependent on genetics to ratify conclusions.

I just also want to highlight the fact that the lengths that animals can go to in order to escape predation are incredible. These geckos have the largest scales of any species, which, far from rendering them more protected, we think makes them particularly easy to lose. But what these geckos drop are not just scales, but skin as well! And just like the tail, it is also partially voluntary. The kind of evolutionary pressure that would cause that degree of adaptation is hard to imagine, but we know of few examples of animals that are better adapted to escape from would-be predators in a more extreme way.

Q: How did you first hear about PeerJ, and what persuaded you to submit to us?

I probably first heard about PeerJ on twitter. Currently, I feel that it is the best possibility for broad-impact open access publishing, without the unmanageable publication costs of comparable platforms. Taxonomy is a particularly underfunded field, so coming up with the money for some publication charges is often practically impossible—this makes PeerJ stand out from the rest.

Q: How was your experience with us?

The PeerJ platform is excellent, and I doubt I have ever had such a smooth publication experience, especially from an automated system. It does take longer to get through initial submission than you might expect, due to all the prerequisite information requested, but afterwards everything went very smoothly.

Q: How would you describe your experience of our submission/review process?

As I said, the submission process was more long-winded than expected, but it was not unpleasant per se. The review process was very fast, especially considering the length of our paper.

Q: For the benefit of future authors, can you briefly explain the process you followed when you got the first decision and how you organized your revision and rebuttal?

We were pleasantly surprised when the reviewers asked for relatively few changes to our manuscript. They were generally positive – this meant that the article was close to publication already and it made the publication phase of the manuscript by far the smoothest and fastest part of the whole process, which had already been under way for two years before submission. I immediately circulated the reviews among the coauthors, and let them know that I would be taking the first steps in dealing with the reviewers’ requests, and would circulate a manuscript after I had done so. One of the requests the reviewers and editor agreed upon was the inclusion of a tree figure and map to contextualise the study better without need to pull up previous research. This was something we had actually already been considering before submitting the manuscript, so the building blocks of a figure were already ready; the figure itself could be constructed in a matter of one or two hours. Once this was done, and the rest of the reviewers’ comments had been taken into account, I sent around the manuscript to the coauthors for them to make further changes. This was a relatively quick process, and soon the coauthors’ comments were again with me. I collated them into a final document, and in short time was able to have a revised version ready for resubmission. I drafted a rebuttal letter to accompany the new manuscript, following a standard formula I employ for manuscripts: first a brief cover letter detailing the extent of changes, followed by an extensive list of comments by the editors and our responses and actions resulting from them. These documents I then entered into the PeerJ system, and resubmitted. From receipt of the initial decision to resubmission took a total of three weeks, but would have been much faster if we had fewer parallel projects.

Q: Would you submit again, and would you recommend that your colleagues submit?

Certainly I plan to submit again; now that I have the subscription, you can expect at least one paper from me in PeerJ per year. It’s a great system, and I intend to take advantage of it. 😉

PJ: We wish Mark every success in his future studies, and we encourage other researchers to aso submit their best work to PeerJ!