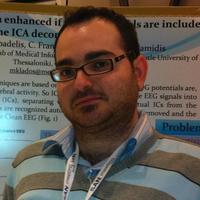 I was born at 28/06/1983 in the most beautiful island of Greece called Crete but I was raised in Stavros where I graduated from 1st High School of Stavros in 2001.

From 2001 until 2007 I was an undergraduate student of the department of Mathematics ofAristotle University of Thessaloniki where I was focused in pure mathematics, theoretical computing and cryptography.

From 2007 until 2009 I was a graduate student of Medical Informatics which is an interdepartmental graduate program organized by Medical School,Computer Science Department and the Department of Electrical and Computer Engineering.

From 2014 until now I am a Postdoctoral Researcher in the Research Group for Neuroanatomy & Connectivity of the Max Planck Institute for Human Cognitive and Brain Sciences and I am investigating the brain connectivity and dynamics in relation to interindividual variance in fMRI signals.