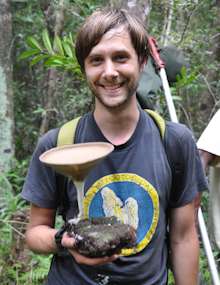 Bryn Dentinger, mycologist at Royal Botanic Gardens, Kew, identified three new species of mushrooms contained within a commercial packet of dried Chinese porcini. Brin and his colleague Laura Suz first reported the discovery in PeerJ PrePrints a few weeks ago, and today we are excited to publish the peer-reviewed version of their article.

We invited Bryn Dentinger to comment on his work and his experience publishing with us.

BD: My colleague and I identified species of mushrooms found in a packet of dried porcini purchased from a grocer in London using DNA barcoding. We discovered that of the 15 randomly selected pieces from the packet, we could diagnose three distinct species, none of which had been formally named by scientists.

BD: My wife bought this packet on a whim because the labeling suggested the mushroom originated in the tropics, where typical commercial porcini do not occur natively. She knew I would be interested in knowing what species might be in the packet. So, really, the credit for this should go to her.

BD: I expected to find species that had no formal names – when I enquired, the company spokesperson confirmed my suspicions that the porcini originated in southern China, and unnamed species of porcini in the international food chain were already known from previous studies. What surprised me was how many species we found represented in just 15 pieces from a single packet. Porcini are conspicuous and often well known relative to other mushrooms because of their culinary qualities. So finding three unnamed species in a packet sold in London is kind of like discovering new species of tuna from a tin. 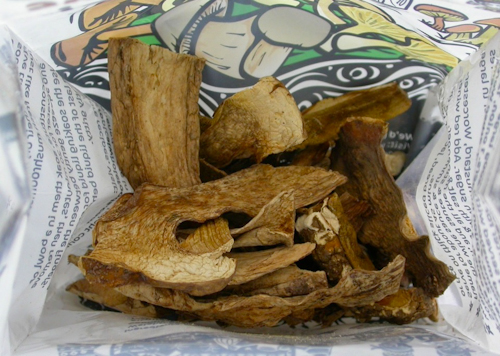 BD: I hope that the public sees how taxonomy of the natural world can be relevant to everyday life, even today. The science of naming and classifying life is too often taken for granted, but for largely unknown groups like fungi, it is still an exciting field with fundamentally important scientifically significant advances. I also hope the public appreciates how diverse and understudied fungi like porcini are – we probably know 5-10% of the fungi in the world, yet of these few they have given us important foods (bread, beer), medicines, and ecosystem services.

BD: I would be interested to know just how many species of porcini are being traded globally and how ubiquitous these new species are in the marketplace. But for me the real mysteries of porcini remain undiscovered in poorly explored (mycologically) regions of the world, especially tropical Asia and Africa.

BD: I think it’s important to be transparent about peer review, especially in science. Opinion often influences decisions made during review, but by making reviews and responses publicly available, it reveals how science and reporting of science is itself a process, and it also allows everyone to make their own interpretations of these decisions.

BD: I first heard about PeerJ from a colleague, who was recently appointed as an Academic Editor. I was persuaded by the affordable, open access publishing, the transparency of the review process, and the emphasis on scientific rigor rather than an opinion on scientific impact in the editorial evaluation.