DNA sequencing in the middle of the Pacific Ocean – Author Interview

During the 2013 Southern Line Islands Research Expedition, a group of researchers brought a DNA sequencer on a ship in the central Pacific to do remote sequencing in real time. The most surprising thing is that it actually worked! Computer scientists and biologists successfully sequenced 26 marine microbial genomes and 2 marine microbial metagenomes. Sequencing out into the field allowed them to look at their data and develop new hypotheses without delay, enhancing the productivity of the research expedition. Today, we published an account of their trip and methods, and we invited Robert Edwards, corresponding author on the study to answer a few questions. 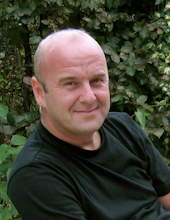 RE: I am an Associate Professor in Computer Science at San Diego State University. My background is in Microbiology, my PhD was studying the regulation of nitrogen fixation in Klebsiella pneumonia, but I have also worked on bacterial pathogenesis, in particular Salmonella and E. coli infections. I have been focusing on bioinformatics for over a decade, and have built tools for microbial genomics (SEED, RAST) and metagenomics (MG-RAST, RTMg, crAss, etc) analysis.  Part of that focus, which was indispensible here, is an expertise in Linux, which I have been using for nearly 20 years. My research group focuses on building solutions for biologists to enable them to analyze their data, as well as de novo analysis of biological datasets.

RE: We took a next-generation sequencer, an Ion Torrent, on a research expedition, and toured the Line Islands in the central Pacific, sequencing microbes and analyzing their genomes while we traveled. The analysis led to hypotheses that we could test while we were in the field, and shows that next-generation sequencing can be used by biologists wherever their research leads them. This has massive implications for ecology, but also for conservation, bioprospecting, and a whole suite of other sequence based technologies. 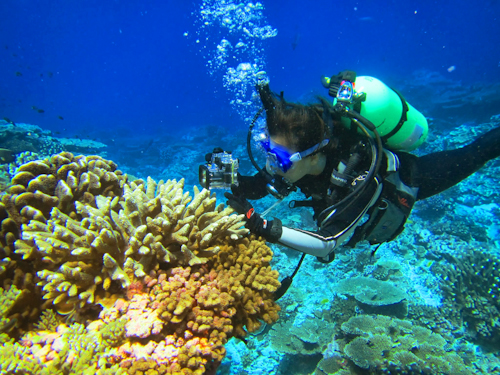 RE: Most people thought we were completely crazy when we said that we would do this. The protocols for next generation sequencing are designed to be used in clean laboratories, and the data requires high performance computing. Seawater tends not to prolong the life of electronic components, and so everything was really stacked against us. However, those weren’t the real challenges that we faced. The sample preparation was easy, especially for me, as Yan Wei [first author] did it all! It helps to have someone with her amazing ability to fine tune experiments to ensure their success, of course.
The computational aspects were much more challenging than the biology. As we note in the paper, there were some significant problems that we had to overcome, particularly a broken OneTouch. It would have been easy at home in San Diego – in principle one call to tech support, or an hour searching the Internet, and the problem would have been solved with an express shipment. However, in the middle of the ocean with no chance of outside help except very expensive satellite phone communications we were on our own.
You become inspired to be creative when you have to solve all the problems without outside help and become especially creative when all your colleagues are out SCUBA diving with dolphins and sharks and you are stuck inside working on a computer!
The other anecdote to share was the first time we figured out it had actually worked. We had finally annotated our sequences, and the annotations were being written to a file. It quickly became clear that it was a Vibrio genome, as we expected. The dive teams had left the boat in zodiacs, and were preparing to enter the water, but I couldn’t wait to share the news, so I radioed all the teams to tell them we’d succeeded in sequencing and analyzing the genomes. Most of the scientists aboard didn’t share my enthusiasm and were wondering why I was holding up their dive! 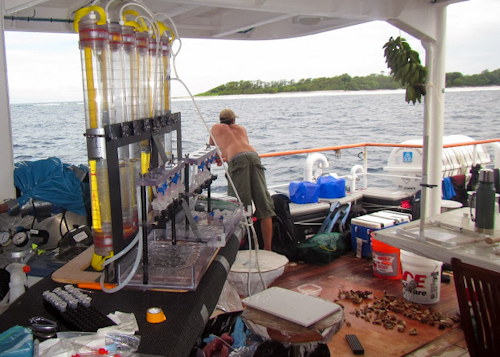 SDSU Postdoctoral Researcher Andreas Haas takes a break from processing the water samples in the large tubes to survey the view of Vostock island from the aft deck of the Hanse Explorer. Photo: Rob Edwards

RE: That it worked was the biggest surprise – not only to us, but also to the naysayers who said it was impossible! That we can take next-generation sequencing and run it anywhere, even without internet access, that we can analyze genomes and metagenomes, and come up with meaningful results. That is the truly transformative result of the paper.

RE: That sequencing is really everywhere, and impacting every aspect of biology. Although our work is not at all about medicine, clearly the ability to sequence DNA anywhere in the world is going to have huge impacts on society. We’re also pushing the boundaries of what is technically feasible and at the same time learning new things about ecology and evolution, areas that we have studied for hundreds of years.

RE: We talked about next generation sequencing on a boat for a long time, and we learned a lot of lessons by doing it. One of the key lessons we learned is that the “thinking” part quickly becomes limiting. We can generate so much data so easily, but we need more people to actually think about it while we are there! In the next iteration I think we will try and post the data while we are at sea to crowd-source the questions we should be answering while we are still there.

RE: These results, together with our ten years of studying these uninhabited atolls, is leading us to the conclusion that there are highly related bacteria that are resident on the reef, but that they are supplemented by transient bacteria. Of course, they all share their DNA via horizontal gene transfer (HGT). A detailed and comprehensive study on these islands would be the ideal place to unravel the role of HGT in the evolution of bacteria in natural, unspoiled, habitats.

RE: It is a novel feature of PeerJ, and it is also appealing because of the transparency that it inspires. I often read papers and think “oh that sentence was introduced in response to the reviews” or “if I’d reviewed this paper I would have asked x, y, or z”. By seeing the reviews you can see what other people are thinking about the paper, you can see how the authors adapted the paper in response to the reviews, and you can see how science progresses.
For this paper, when you read the reviews one of the biggest criticisms was that the code was not available. That was a clear oversight on our behalf, all of the code was already in public repositories but we never really thought that is what people wanted to see.

RE: I first heard about it through the affiliation with O’Reilly publishing. I’ve long been a fan of O’Reilly publishing (it was the camel book that got me into Perl), and of Tim O’Reilly’s philosophy on publishing, DRM, and all things to do with electronic media. Since then we’ve published several papers in PeerJ including the Line Islands collection, of which this article is a part. It was a natural home for this article and we never considered publishing it anywhere else.

RE: I was really surprised to be working with the journal staff while the paper was being revisited after the first round of review and before it went back to the academic editor. That seemed like such a natural way to work that I was surprised that I haven’t experienced that before. It allowed me to present the best possible article to the reviewers and unburdened others from correcting my mistakes!

RE: The ease of submission was fantastic. Working in a Linux environment I use Open Office for everything, and it is awesome to be able to submit native documents. With reference support in zotero, there is no reason not to use open software. Its time the rest of the open access community considered other forms of open!

RE: Everyone was 100% supportive of the decision to use PeerJ. Not everyone understood the decision to publish a preprint, but it is there and no one has complained (to me!).

RE: Definitely. I would not hesitate to submit to PeerJ again.

Check out some of our Marine Biology publications in PeerJ. Submit your next article to PeerJ, and join Robert Edwards and thousands of other satisfied authors.