In a new study published in PeerJ today, researchers compared the ‘yawn contagion’ effect between humans and bonobos. By doing so they were able to directly compare the empathic abilities of ourselves with another species, and they found that a close relationship between individuals is more important to their empathic response than the fact that individuals might be from the same species.

We felt it would be interesting to ask Elisabetta Palagi — first author on this article — a few questions about this work. 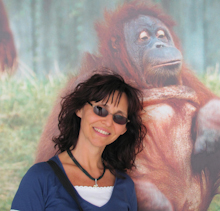 EP: I have been studying primates since 1992, when I came across a colony of chimpanzees for the first time. I was fascinated by them, so I decided to explore the possibility of focusing my research on humans and non-human primates. I am particularly interested in human and non-human primate ethology. As behavior doesn’t fossilize (unfortunately!), the unique possibility we have to study the evolutionary foundations of some human behaviors is to explore such behaviors in other primate taxa.

I think that cross-species research is a powerful tool allowing us to better understand our complex species. And the most important thing is the similarity of the methods if we want to do standardized comparisons. For example, in this study we chose to employ a naturalistic approach to explore and compare the dynamics of yawn contagion in humans and bonobos. We collected data on yawn contagion in both species during their daily life interactions, by applying the same observational paradigm based on identical operational definitions. This naturalistic approach allowed us to collect reliable data, thanks to the absence of invasive and artificial management practices (social isolation, spatial limitation, interaction with novel objects and persons) which can produce different psychological and behavioral biases, and differential attention to artificial stimuli. For example, previous research on humans has demonstrated that the awareness of being observed can inhibit yawns whereas simply reading about yawning is sufficient to trigger yawns and possibly inflate yawn response in the experimental subjects. Our human subjects were unaware of being observed.

EP: Whether humans are the only empathic beings or not is still under debate. So, we focused on the first direct comparison between the empathic abilities of humans and bonobos, our closest evolutionary cousins. It is difficult to measure empathy in an objective way because the ability of experiencing others’ emotions is hard to quantify in animal species.

The transmission of a feeling from an individual to another one, known as emotional contagion, is the most basal form of empathy. Feelings are disclosed by facial expressions (sorrow, pain, happiness, tiredness, etc…) and can travel from an “emitting face” to a “receiving face”, just like signals go from the broadcasting station to the audience.Mirroring facial expressions evoke in the receiver the same emotion experienced by the sender. Hence, mimicking other faces helps establishing emotional connections, which is like saying same face-same emotion.

Yawn contagion is one of the most pervasive and apparently trivial forms of emotional contagion. Who hasn’t been infected at least once by someone else’s yawn (especially over dinner)? Humans and bonobos are the only two species in which it has been demonstrated that yawn contagion follows an empathic trend, being more frequent between individuals sharing a strong emotional bond. Therefore a comparison between those two cousin species made sense.

Over five years, we observed both humans and bonobos during their everyday activities and gathered data on yawn contagion by applying the same ethological approach and operational definitions. We considered two features of yawn contagion: how many times, and how quickly, the individuals responded to others’ yawns. Intriguingly, bonobos responded as much as frequently and promptly as humans to others’ yawns when the yawner and the responder were not friends or kin. Therefore, it is not possible to claim that emotional contagion is always highest in humans. Humans responded more, and faster, than bonobos, only when friends and kin were involved, probably because the strong relationships between humans are built upon complex and sophisticated emotional foundations linked to cognition, memory, and memories. In this case, the positive feedback linking emotional affinity and the mirroring process seems to spin faster in humans than in bonobos. In humans, such over-activation may not only explain the potential yawning response, but also other kinds of unconscious mimicry response, such as happy, pain or angry facial expressions. In conclusion, what makes the difference in the level of emotional contagion between humans and bonobos is not the species but the relationship quality shared by individuals. When the complexity of social bonds, typical of humans, is not in play, Homo sapiens climb down the tree of empathy to go back to the understory, which we share with our ape cousins.

EP: Collecting data on bonobos was much simpler than on humans. In our study, humans were not aware of being under investigation! As we included in the study people that we didn’t know, we had to converse with them in order to get personal information. Data were typed and stored in mobile phones during dinners, entered in laptops on the train, or noted down on paper in public spaces where the practice could easily go unnoticed.

EP: The comparable levels of yawn contagion recorded in the two species when a strong emotional bond between the yawning subjects is missing. We are not so different after all…

EP: I hope that people understand the importance of focusing our attention on other animals to better understand our own species. We are animals too! And if we want to explore our minds from an evolutionary point of view, we have to look at other animals.

EP: We are working on gender differences in some empathic behaviors, but the project is still in progress!

EP: Like in a dream? I would like to apply naturalistic vs experimental methods to several animal species in order to evaluate the benefits and the limits of each approach.

Check out our publications on primates, and submit your next article to PeerJ or PeerJ PrePrints.