You certainly couldn’t miss the amazing photo of a Reef Manta Ray on our homepage a few weeks ago. Dr. Simon Pierce—marine biologist and photographer—took this picture, along with many others, whilst doing his own research. We were very interested in hearing more about his scientific work and his passion for photography. 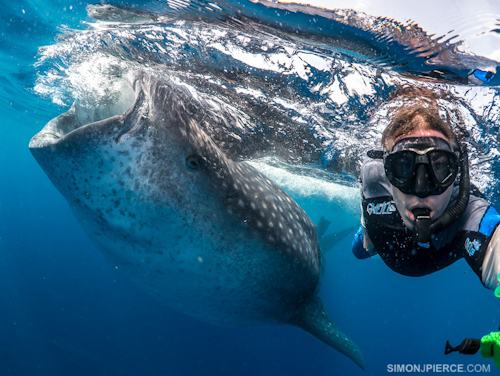 PJ: Can you tell us a bit about yourself and your life as a marine biologist?

SP: Sure! I grew up in New Zealand and studied ecology for my undergraduate degree.  After I learnt to dive in my final year, I decided to move over to Australia to work on rays and sharks for my honors and PhD. My doctoral work focused on the conservation and management of inshore elasmobranchs.

As I was finishing my fieldwork, in 2005, I was invited to start a whale shark research project in Mozambique. Never having been to Africa before, or indeed having seen a whale shark, this was somewhat challenging. Fun though. In the years since I’ve had the opportunity to study whale sharks in multiple countries. I’m also supervising a PhD project on sea turtle conservation in Mozambique, and collaborating on global manta ray studies.

Professionally, I’m a Principal Scientist at the Marine Megafauna Foundation (which I co-founded with manta ray researcher Andrea Marshall), as well as a Director at Wild Me and Science Coordinator of one of their flagship projects, the global whale shark database. I’m also a member of the IUCN Shark Specialist Group.

PJ: How did you become interested in the conservation of threatened marine species?

SP: New Zealand suffered a number of misguided introductions of alien species. Many of our native animals were wiped out, or restricted to small populations on pest-free islands. Learning about what scientists and conservationists are doing to reverse these declines was absolutely fascinating to me. My father was a keen fisher, which introduced me to marine life. As I became more familiar with marine animals I realized that, globally, many marine vertebrates are similarly under threat.

Anthropogenic pressures have hugely impacted shark and rays. Management intervention is required for recovery to occur in many species. Personally, I feel I can best contribute by identifying and prioritizing the means of reversing these declines, and assisting with these efforts.

Whale sharks are a focus for me. These gentle giants are globally threatened by fishing and boat strikes. They’re wonderful animals to work with, often interested in people, and despite their enormous size (up to 20 m) they’re entirely harmless. They’re really rather endearing. 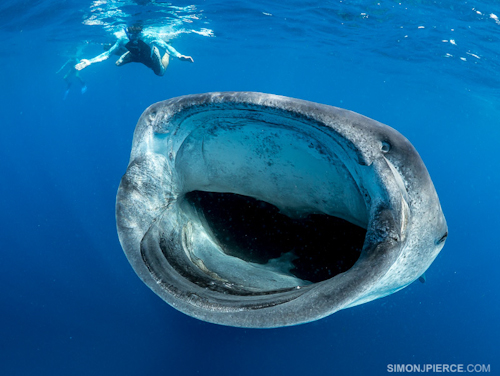 Whale sharks have an enormous mouth, but are harmless to people

PJ: You are the author of several PeerJ PrePrints, which form part of ‘The Third International Whale Shark Conference’ PeerJ Collection. Can you tell us a bit more?

SP: The organizers of the Third International Whale Shark Conference, held at the Georgia Aquarium in the US, partnered with PeerJ to produce the conference proceedings. I think that was a great decision. All the studies published from the conference will be grouped together, freely and easily accessible to all. The abstracts that are currently online will, hopefully, be replaced by full publications in many cases.

PJ: How do you combine your scientific work and your passion for photography?

SP: Photography is a big part of my work. Many of the species I routinely work with, such as whale sharks, manta rays and sea turtles, are individually identifiable through their color patterns or body form. When I’m in the water, I’ve almost always got a camera in hand. It’s a great chance to get some opportunistic pictures. 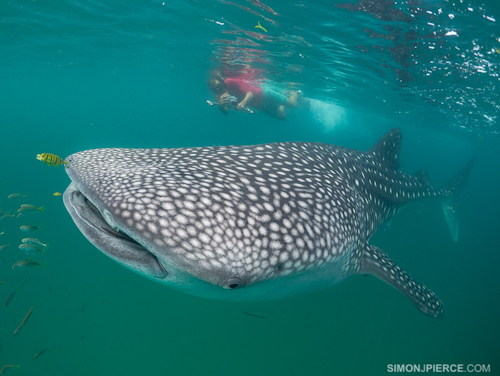 In 2012 I got my first interchangeable-lens camera. That really opened up photographic possibilities. Mirrorless cameras, like the one I have, are small enough to be easy to swim (and travel) with. It’s my constant companion underwater.

PJ: Can you tell us about your favorite photo? What’s the story behind it? 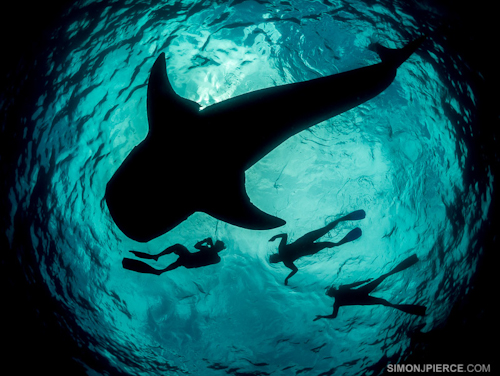 SP: I was in Mexico last year to lead a whale shark research expedition.I had attempted a couple of shark silhouette shots over the preceding days, but I had been stymied by the brightness of the sunball. As you can probably imagine, positioning yourself perfectly underneath a fast-moving fish is not always simple either.

In this particular case, the swimmers alongside the shark were positioned perfectly to block me from taking the ‘science’ photos I wanted. I noted that it was momentarily overcast, and I decided to try for a silhouette instead. In hindsight, the swimmers were a stroke of luck, as I think their presence improves the balance of the picture and emphasizes the size of the shark.

PJ: Do you have any anecdotes to tell us about your pretty sweet job?

SP: A few years ago I was out with a bunch of tourists off Mozambique. They jumped in with a whale shark, while I stayed on the boat to confirm that everyone could swim. One of them shouted back to me that the shark had a net on it. I went in, dived down, and saw the shark was wrapped in a net that was chopping off both the pectoral fins (on the side) and the dorsal fin on it’s back. I quickly grabbed some scissors from the first aid kit, and caught up with the shark again. The shark was swimming slowly enough that, in a series of dives, I was able to remove the entire net. As I made the final cut, and the net fell away, I made eye contact with the shark. I’m pretty sure we had a moment.

I was radiating moral superiority for about a fortnight after that one.

PJ: What kinds of lessons do you hope the public take away from your work?

SP: Well, for one thing, they can be active participants. In addition to joining in on my research trips, there’s a global database for whale shark sightings. Anyone that takes a photograph of a whale shark, anywhere in the world, can submit the photo to the site. Over 4,000 people have already contributed their shots. If the shark is identifiable from the photo, we’ll be able to see the sighting history of that individual shark and track its re-sightings in future. ‘Citizen science’ is a hugely valuable resource for us – thanks to all the public assistance, over 5,000 whale sharks from 45+ countries have been identified.

More generally, I’d like people to understand that sharks aren’t scary. They’re just fish. Some are big, most are small. They’re not particularly interested in people. Keen marine tourists already know that they’re actually very difficult to find. Some of my work has focused on sustainable whale shark tourism. I hope it helps more people interact positively with these amazing fish.

PJ: What’s next in your research?

SP: Whale sharks are an enigmatic species. For a shark they are the subjects of significant research attention, but in real terms they remain poorly known. We generally study them in the few areas where they aggregate to feed. For some reason, though, the majority of the sharks found at such sites are juvenile males. The only location where adult female sharks are consistently seen is in the northern Galapagos Islands. Shortly we’ll start deploying satellite-linked tags out there to work out their depth and dietary preferences. Then, hopefully, we can identify where these enormous fish might be in other oceans.

SM: What a great question. What I’d actually like to do is eradicate all the introduced pests from New Zealand to let the native life recover. For many species, the technical knowledge of how to remove them exists, but it would obviously be a significant undertaking!

SM: For those who would like to get involved in whale shark research themselves, I lead expeditions that are open to the public. I’ve also just started to blog about both marine science and photography. 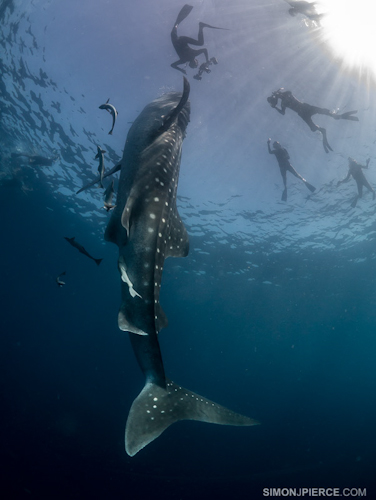 More generally, I’d just like to say how glad I am that PeerJ has been created. First, it accelerates the whole process of science. The ability to publish preprints and the speed of review (and subsequent publication) is amazing. In other journals, I’ve sometimes had to wait two years between acceptance and publication online. Second, I want my work to be available and (hopefully) useful. Most of the countries in which I work are still developing, and academics and managers do not have access to paid scientific databases. I love that PeerJ papers are available to anyone with an Internet connection.

We encourage you to check out some of our Marine Biology publications in PeerJ. Submit your next article to PeerJ or PeerJ PrePrints, and (assuming your article is published) don’t hesitate to contact us at editorial.support@peerj.com if you have an image suitable for being featured on the PeerJ homepage!