Interview with an Author – Lily Lewis

Today’s Interview is with Lily Lewis, doctoral candidate at the University of Connecticut and corresponding author on ‘First evidence of bryophyte diaspores in the plumage of transequatorial migrant birds’, an article that we featured on our homepage. She and her colleagues showed that migratory birds about to fly from the Arctic to South America harbor small plant parts in their feathers, suggesting that entire migratory populations could play significant roles in bipolar expansions of plants. This article has already received quite a bit of attention in the press. We were very interested in hearing more about her research and her experience publishing with us. 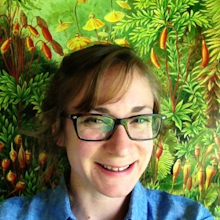 LL: I had always loved nature, and plants in particular, but my first botany professors really encouraged me to look closely at the diversity around me. Each time I learned about a different group of plants I felt like I was discovering an entirely new yet connected part of the world. Two days after graduating I left Florida for Alaska to begin working as a field technician and assistant botanist. Along the way I became increasingly enamored with bryophytes, which are exceptionally diverse and abundant in high latitude regions. I soon found myself in Sub-Antarctic Chile working on the bryophyte and lichen centric Ecotourism with a Hand Lens program.  While in Chile I was intrigued to find species that I was familiar with from Alaska. It was in Chile that I connected with my current advisors, Bernard Goffinet and Ricardo Rozzi and began my PhD course work focusing on Bryophyte biogeography in the department of Ecology and Evolutionary biology at the University of Connecticut.

LL: I, of course was not the first to notice the similarities between the floras of the Arctic and Sub-Antarctic. For many years’ people have speculated that migratory birds may have transported these plants across the tropics. Evidence supporting this hypothesis, however, has been solely circumstantial. We decided to take a look at the feathers of candidate birds to see if they might be carrying plant parts, or diaspores in their plumage. We found many more diaspores then we had expected, suggesting that birds may indeed be dispersing plants as they migrate across the tropics.

LL: Recently the student who spearheaded the laboratory development and optimization of our novel screening method, Emily Qian, interviewed with several very competitive Genetic Counseling programs. During an interview for one of her top-choice schools (where she will soon begin her postgraduate work) she was asked if she was comfortable working independently and coming up with novel solutions to problems. She said that was not a problem for her, she had plenty of experience trouble shooting and optimizing from her work on the feather project. This project represents an important part of the formative research experiences for three undergraduate students, and has helped me develop my skills as mentor.

LL: The frequency with which we recovered diaspores! At the beginning of the project I thought we were looking for a needle in a haystack. As the project progressed and we recovered more and more plant parts, our understanding of the obstacles that make long distance dispersal events rare began to change. Our data suggest that it’s fairly common for plant parts to be picked-up and potentially dispersed by birds. The real challenge begins after dispersal, when a plant part (diaspore) must establish a new population. The challenge presented by establishment following dispersal likely accounts for the presumed rarity of bird-mediated long distance dispersal events.

LL: I hope it serves to remind us that biodiversity at many levels, from the long distance migrant shorebirds to the tiny plants that dominate our high latitude regions are deeply interconnected and that the processes that shape global patterns of diversity are themselves diverse.

LL: Our results address the first condition for successful bird-mediated dispersal, that birds carry diaspores. We are now beginning to use DNA markers to identify which species are trapped in the feathers, as well as growth experiments to see if they are viable.

LL: The comments we received from reviewers were exceptionally helpful, and really contributed toward the clear communication of our research. Their comments and our responses represent a critical part of the scientific process (i.e. peer review), which is typically invisible for those not working directly on a paper. Peer review is an important part of the scientific process, just as data collection is. It seems strange to have some parts of the process be invisible while others are highly visible. I like the illumination of the entire process.

LL: I first heard about PeerJ from my collaborator Chris Elphick who serves as an Academic Editor for PeerJ and a faculty member in the department of Ecology and Evolutionary biology at the University of Connecticut..

LL: After the paper was accepted, I was about to begin some fieldwork that would have me out of phone and email contact. When I told PeerJ about this, they worked with me to schedule the final edits and development of a press release around my research schedule. PeerJ has been so helpful, it’s been like working with colleagues!

LL: I found the entire process to be very smooth, and surprisingly well paced! The turnaround time after submission was exceptional. Most importantly, the reviewers for the paper, as well as the Academic Editor are renowned experts in the field of dispersal biology. Two of the three reviewers choose not be anonymous, which I thought was great. I was really excited when I received feedback from them.

LL: Yes, I have already recommended PeerJ to a number of colleagues, and I certainly will submit future work to PeerJ. More and more funders are requiring open access publishing, and I entirely support this. I think the affordability and ease of submitting and publishing with PeerJ is going to make it a leader in the Open Access world.

LL: Thank you! It has been my pleasure!

We encourage you to check out some of our other biogeography publications in PeerJ. Join thousands of satisfied authors. Submit your next article to PeerJ or PeerJ PrePrints.