Interview with an Author – Michelle Quayle

Have you ever wanted to play with an interactive PDF in a scientific article? Michelle Quayle and her colleagues have made it possible for you. Last week, we published their article “An interactive three dimensional approach to anatomical description—the jaw musculature of the Australian laughing kookaburra (Dacelo novaeguineae)” which includes a virtual, 3D model of a bird skull on the final page of the PDF. 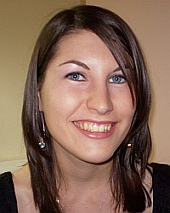 This represents very interesting 3D interactive functionality which can aid visualization in taxonomy studies, and so we invited Michelle Quayle, first author on the study to answer a few questions.

PJ: Can you tell us a bit about your PeerJ article?

MQ: This article describes the jaw muscle anatomy of an Australian laughing kookaburra (Dacelo novaeguineae) using the relatively new presentation method of the 3D PDF. This means that when the article is downloaded and opened in the commonly available PDF software Adobe Reader, you are able to view the anatomical information in a fully interactive way by rotating and zooming into features, changing the visibility of certain muscles so that the layer below can be observed and even making parts of the model transparent. This is particularly useful for anatomical description as traditional 2D illustrations can be difficult to interpret due to the complex geometry and layering of anatomical structures.

PJ: Was there a need for this study?

This anatomical description is part of a larger project looking at how differences in skull shape influence the biomechanical performance of the jaws of different species of kingfishers (the kookaburra is a species of kingfisher) when feeding. Biomechanical performance can be estimated using engineering software to simulate the skull biting down on a prey item. To drive the bite we obviously need to include the jaw muscles in the model, however when we searched through the literature on kingfisher anatomy there was little to be found, so we decided to document it.

PJ: Why did you choose the Australian Laughing Kookaburra as a model?

Species of kingfisher vary greatly in size, prey choice, feeding ecology and habitat; yet still retain the distinctive spear-like beak shape. We wanted to look into the small differences in skull shape that may influence the larger ecological variation of kingfisher species, and needed a representative species to base our measurements on. We chose the Laughing Kookaburra to be our baseline as it is one of the extremes in kingfisher size (the second largest in the world), and feeding behaviour (known to eat anything from insects to snakes). The Laughing Kookaburra is native to our area so we were easily able to obtain a specimen, and also, due to their large size, the jaw muscles are easier to observe compared to some of the much smaller species. 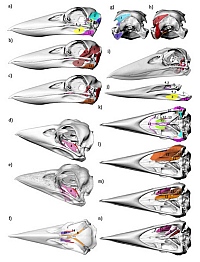 The 3D model was created from a stack of 2D CT scan images of a kookaburra. We used a software package by Materialize called Mimics to read the stack of CT images and convert them into 3D objects. Mimics has some useful automatic tools that allowed us to quickly model some areas of the scan such as the bones, however areas that cannot be modelled in this way, such as the muscles, can be manually “drawn” onto the CT image using some of the editing tools in Mimics. The end result of this process is a set of individual digital 3D objects, which can be colored and rendered for display or exported for use in other software packages.

The software used to embed the 3D model into the PDF document is code written by co-author David Barnes. We decided to create our own code for this process as it is free and so that all aspects of the model creation are customizable. David’s code is freely available.

The kookaburra was CT scanned in a human hospital scanner, so the resolution didn’t suit the small body size of a kookaburra well. This caused some challenges when modelling the jaw muscles as some of the smaller muscles appeared as undistinguished grey areas in the scan. To overcome this we dissected the jaw muscles to determine where the separate muscles were. If the scan was higher resolution then it may have been possible to digitally “dissect” all of the jaw muscles from the CT scan without having to dissect the original specimen.

Another challenge we come across was identifying the names of the jaw muscles. The terminology for naming avian musculature varies considerably between previous studies and it was difficult to determine which terminology was right to use. In the end we decided to include a table of the varying names for the jaw muscles to aid future studies.

PJ: What do you hope other people can do with the software you’ve used?

We hope that other people will move towards using 3D PDF generating software as a method for displaying their data in journal articles. At the moment this method has been used for some studies, though it is often included only as supplementary information as a separate download to the full article. PeerJ has included our 3D model as an Appendix within the full article, which is a welcome step forward for 3D PDF in science communication.

PJ: Thank you for your time and for this fascinating model for future taxonomy publications.

Join thousands of satisfied authors, and experience the future of publishing. Submit your next article to PeerJ or PeerJ PrePrints.