The lighting of a scene is an important factor that the visual system considers to help it identify objects. As soon as you interpret a visual object as possibly being three-dimensional, your visual system immediately tries to determine where the light is coming from, and then uses this information to decode the object’s properties. Because the human visual system interprets lighting as coming from above, in the example below, we perceive the spheres whose upper part is brighter as emerging from this image, and the sphere whose upper part is darker as receding into it. It is called the ‘light from-above effect’. 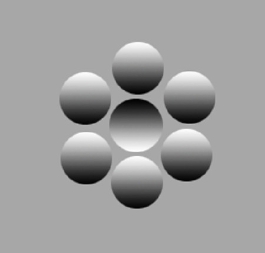 Today we published “The perception of shape from shading in a new light” in which Dr Michael Proulx – Associate Professor of Psychology at the University of Bath – demonstrated that the light-from-above effect is permeable to outside influence.

Dr Proulx first became interested in how humans and non-human primates perceive three-dimensional shape-from-two-dimensional shading when reading a book by Donald Hoffman on “Visual Intelligence”. One of the ‘rules’ of vision (those efficient visual shortcuts revealed typically by illusions) that Hoffman describes is the ‘light from-above effect’. 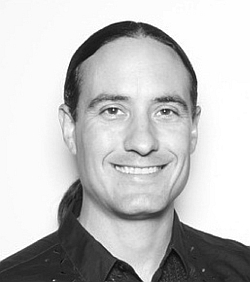 “It immediately occurred to me that an external light cue might overrule this light-from-above assumption, even if it was irrelevant and had no impact on the stimulus that was in fact two-dimensional”, Dr Proulx told us. “A candle was handy at the time I was reading this at home, so I placed it beneath a figure in the book (similar to the figure in my PeerJ study) and found that my perception of shape-from-shading reversed to match that of the candle below the page. This quick 18th-century-style experiment implied I was on to something! A review of the literature turned up some sophisticated computational evidence that an external light can indeed have this effect, but many researchers kept citing the light-from-above effect as if it was impermeable to outside influence. A couple of experiments later I had found a direct demonstration of this that can be experienced in a way foretold by the first-ever paper on this topic over 200 years ago by Rittenhouse!”

Anyone can replicate the effect described in Proulx’s paper in a dark room with a single light placed below the image used in Figure 1A (see above). Individual differences in the perception of shape-from-shading exist, and Dr Proulx thinks that “this is a fascinating direction for future work in this area. The study of individual differences in perception and attention has made a number of exciting findings in the areas of neuroscience and psychology, and shape-from-shading is an excellent research area for the next big discovery.”

Dr Proulx used black-and-white stimuli in his study but it is also interesting to note that color perception would influence the three-dimensional shape perception. Indeed Fred Kingdom of McGill University has published a number of fascinating studies on the influence of color on perceiving shape-from-shading. “It makes an interesting link to my new work published in PeerJ in that it shows the importance of understanding how the visual system is able to use much more complex relationships when determining how we see the world”, Dr Proulx explained.

Dr. Proulx’s work in his Crossmodal Cognition Lab ranges from vision science to the study of vision impairment. He is currently working on a sensory substitution device, The vOICe, to translate images into sound such that participants can learn to see with their ears! “In this way we are investigating how well classical visual phenomena, such as shape-from-shading, can be perceived by the visually impaired with a vision restoration device”, he explained.

Dr Proulx chose PeerJ to publish his fascinating work and he is very happy about it! “The review process at PeerJ was incredibly helpful yet critical. The efficiency of producing the proof was astonishing, and well done.” We hope to read more on Dr Proulx’s research soon!

Join Dr Proulx and thousands of other satisfied PeerJ authors and submit your next manuscript to PeerJ!