Take a look at this awesome image featured on our homepage. It illustrates the article “Re-examining the relationship between invasive lionfish and native grouper in the Caribbean” which we published today.

This study re-evaluated the potential ecological relationship between the invasive Indo-Pacific lionfish and native predators such as groupers, in the Caribbean. The authors tested the hypothesis of biotic resistance – the idea that native species could negatively affect the invasion success of introduced species. While there are several examples of biotic resistance across different systems, in particular examples of native species controlling the distribution of invasive plants, there is little to no evidence that native predators can control the distribution and expansion of invasive predators at a large geographical spatial scale.

This group of researchers re-evaluated whether native large-bodied grouper and other predators are controlling the abundance of exotic lionfish (Pterois volitans/miles) on Caribbean coral reefs. They assessed the relationship between the biomass of lionfish and native predators at 71 coral reefs in three biogeographic regions while taking into consideration several cofactors which may affect fish abundance including among others, wind exposure, time since invasion, proxies for fishing pressure, and habitat structural complexity. Their results indicate that the abundance of lionfish was not negatively related to the abundance of large-bodied groupers and other predators. Lionfish abundance was instead controlled by several physical site characteristics, and possibly by culling. Taken together, their results suggest that managers cannot rely on current native grouper populations to control the lionfish invasion.

This was a fascinating study, and so we invited Abel Valdivia, corresponding author on this article, to answer a few questions.

PJ: What were your motivations for undertaking this research?

AV: The invasion of lionfish into the Caribbean basin over the past ten years provides a unique possibility to study marine species invasion at a large geographical scale. Species invasion is one of the major threats the oceans face today, and can be closely related to issues such as fishing and climate change. With rising temperatures due to global warming, several marine species are shifting their geographical range; occupying new environments; establishing new ecological interactions with established residents, and therefore changing the community structure and composition of the invaded systems. Marine invasions due to human introductions or ocean warming are important to understand at a large spatial scale since it will be a very common phenomenon in the near future.

Lionfish have spread to every shallow and deep habitat of the Western Atlantic and the Caribbean, including coral reefs environments, seagrass meadows, mangrove root systems, estuarine habitats, and even depths over 90 meters. Lionfish have even been reported in the colder waters near Boston, Massachusetts. We are still investigating the negative impacts of this invader on all of these already disturbed ecosystems, but one thing is clear – their voracious appetite threatens small fish and juveniles of depleted fish populations including commercially and ecologically important species such as groupers, snappers, and herbivores.  The failure of the Caribbean region to constrain invasion success may be partially associated with the lack of native predatory capacity due to overfishing, or simply to weak biotic resistance by native predators and competitors to a novel predator.

PJ: How would you say your study is controversial?

AV: Over the past few years some studies have hinted that native groupers could potentially prey on invasive lionfish and therefore act as natural bio-control of the invader. There is one study that reported lionfish in the stomachs of at least two species of large groupers. However, it was not clear if the lionfishes were already dead when the groupers ate them. Another study found a negative relationship between the biomass of native Nassau grouper and lionfish at a relative small spatial scale in the Exuma Cays Land and Sea Park in the Bahamas. In fact, we were excited to test the generality of this negative relationship in a paper published last year. Unfortunately, we did not find any evidence that grouper or any other predators (including sharks) or competitors (same size native predators) were negatively related to lionfish and concluded that other physical environmental variables and culling were the main drivers of lionfish distribution and abundance.

Our current study expands on those findings by adding new factors that are known to affect fish abundance (e.g., fishing and reef structural complexity). We also tested whether lack of native predatory capacity was an issue across the Caribbean. While some reefs actually had a low abundance of native predators due to overfishing, other well-protected reefs with high abundances of sharks, groupers and snappers exhibited a high abundance of lionfish. Therefore, the lack of predatory capacity does not limit the control of the invader. In general there is actually little to no evidence that abundant native predators can constrain the distribution and abundance of invasive predators. For example, the expansion and proliferation of the invasive Burmese python in the Florida Everglades was never constrained by the abundant native American alligator.

PJ: What challenges did you face while doing this research underwater?

AV: Doing this research underwater is full of challenges, from adverse weather; strong currents; often poor visibility; underwater time constraints due to excess nitrogen diving at 45-50 feet, and boats sinking through to recreational divers picking up our tape transects because they thought we were “polluting” the reef.

We usually dived in a team of at least 4 to 8 divers at the same time. A couple of divers usually do one belt transect set at a time. However, due to the length of transects your dive buddy is not with you all the time, since she/he might be looking for lionfish. Thus keeping track of everyone while doing fish surveys is almost impossible because you could lose track of the fish you are counting. We came up with a simple underwater safety sound system when we could not see each other. This system consisted on two bangs on the SCUBA tanks to check that you dive buddy was ok and nearby, followed by a similar response of your dive buddy. Repeated banging on the tank was a sign of emergency, but fortunately we never used that code.

PJ: What is next in your research?

AV: Currently, we are working to understand the impact of the lionfish invasion on the entire fish community structure, composition and functional diversity in the Belizean Mesoamerican barrier. We have been monitoring the Belizean reef since 2009 and visited the same 16-18 sites every summer since then. The first records of lionfish in Belize were reported in 2010. Thus we know the fish community structure and composition before the invasion. By comparing fish communities without lionfish and the progression after the invasion we will be able to determine the impact of lionfish at a relative large and continuous spatial scale.

My own dissertation research focuses on the role of predatory reef fish in Caribbean coral reefs when human impacts like fishing are eliminated. The inability of the system in controlling species invasion might be due in part to lack of native predators. Although, we proved that this is not the case in our study (at least for some reefs), we actually lack information of natural baselines for predator abundance across the region. Therefore we do not know for sure how much natural predatory capacity these reef had. In fact, our models of expected predator biomass in the absence of human impacts (like fishing, pollution, habitat modification) and taking into account several physical, biotic, and management related variables, predict that we have lost between 80-95% of large fish predators like reef sharks, groupers, snappers, jacks and barracudas across the entire Caribbean.

AV: Lionfish in the Caribbean are here to stay. Unfortunately we cannot rely on native predators to control their abundance and distribution. Although there are a few claims that native predators could learn to hunt and to naturally eat lionfish without human aid (few dive sites feed local predators with dead lionfish), there is no evidence that this could be feasible at the scale necessary for conservation. Currently, fishing lionfish for consumption is the best, direct, and most effective way to decrease local abundance at least temporarily. 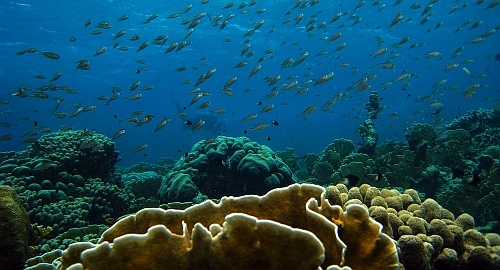