In a well-received and cited PeerJ article “Assessing insect responses to climate change: What are we testing for? Where should we be heading?” published last year, Dr Nigel Andrew et al. examined how research on climate change affecting insects was being assessed, what factors were being tested, and where the studies were performed, from over 1700 papers published between 1985 and 2012.

Over a year has passed since that publication, and the article has already been cited several times, so we wanted to check in with Dr Andrew to see where is research was now headed.

Dr. Andrew, who is Associate Professor of Entomology and Zoology Museum Curator at the University of New England, told us that “this PeerJ publication has helped researchers think about research directions and future needs for spending tight research budgets and time frames.”

He continues: “The reception of my peers to this publication has been very positive in the sense that it has given data to some of the assumptions that we have been making about the type of questions researchers have been asking and the type of data that has been produced. One of the key aspects of the paper that has been well received is the need to biologists to still go out and collect data from the field. A lot of great information can be gleaned from the current literature, but we are still very much at the tip of the iceberg in terms of understanding biotic responses to climate change. Understanding ecological, physiological and behavioural responses of individuals and populations to a changing climate is still a key research priority.

There has been a huge increase in the number of papers assessing insect responses to climate change in the last 18 months. Really interesting is the shift for researchers to assess microclimate influences and temperature fluctuations in a much more sophisticated manner. It is becoming clearer that it’s the extreme that play a key role particularly in having sub-lethal effects in individuals, and these effects can influence longevity and fecundity.”

Dr Andrew, who is also President of the Ecological Society of Australia, is now assessing the influence of temperature variation, nutrition, and competition on different life-stages, populations and species of ants and dung beetles along environmental gradients. His group is also using citizen science to assist in collecting data and get the wider public interested in biology.

We hope to read more about this important research in future papers! 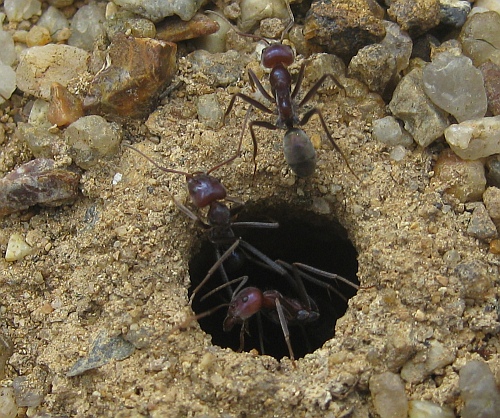 Image of Iridomyrmex purpureus an ant species being studied by this group. Photo by Yinika Perston.