Interview with an Author – Darren Naish

Today’s Interview is with Dr Darren Naish, first author of ‘‘Mystery big cats’ in the Peruvian Amazon: morphometrics solve a cryptozoological mystery’ which we published last month. We were very interested in hearing more about the research he does in his spare time, and his experience publishing with us. 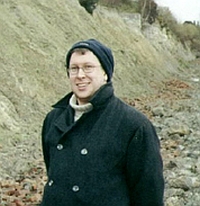 Darren Naish is a zoologist, expert in dinosaurs and other tetrapods. Based at the University of Southampton (UK), he blogs at Tetrapod Zoology, and tweets to the world. You can download his publications at darrennaish.wordpress.com. He’s currently looking for the support of benefactors to fund his next research – so don’t hesitate to contact him!

PJ: Who are the ‘Mystery big cats’?

Darren Naish: Our study focuses on two unusual big cat skulls discovered in Peru, which were thought to perhaps belong to new species, or at least new ‘forms’, of South American cat. According to the hunters who obtained the skulls, the associated skins were unlike those of the Jaguar, the only officially recognised big cat on the continent (with ‘big cat’ here being used in the sense of ‘member of the Panthera group of cats’).

PJ: How did you identify them? 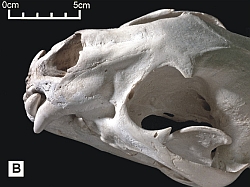 DN: Previous observations on these skulls had used width:height ratios and various qualitative features to compare them with Jaguar skulls, the general impression being that they were different, and unusual. However, these comparisons relied on a very small sample size, something not advisable when you’re assessing the distinctiveness of skulls. We therefore wanted to examine the specimens within the context of a far more inclusive dataset, so we measured them to death and threw them into a giant analysis of cat skull measurements (the one compiled by coauthor Manabu Sakamoto). The strongest results that emerged from this study showed that the ‘mystery’ skulls were similar enough to definite Jaguar skulls to be identified as Jaguars too; this wasn’t wholly surprising as the ‘mystery’ skulls had some readily visible, key Jaguar skull characters anyway.

PJ: Knowing there are certainly other skulls and bones waiting to be found, do you think there is a possible existence of new species?

DN: At this stage, no… based on the evidence we have, I don’t think the possibility of a new big cat species in South American can be considered likely (though I’d love to be wrong, and I’m basing this statement on the data we have now, not on what might come in at some point in the future, of course). Currently, I think that the unusual big cats that people have reported from South America are either aberrant individuals, or misunderstandings of a sort (there are one or two ‘mystery cats’, for example, that might be confused descriptions of small bears).

PJ: What study would you run if you had unlimited resources?

DN: We did our research on copies of the skulls, not the originals – these are too valuable to leave Peru. So we’d go to Peru to examine the originals, and take with us one or two experts on felid genetics (and their required lab equipment). We didn’t pursue the possibility of extracting DNA for several reasons (one being that the only intact DNA left is presumably that locked inside the bones, meaning that any analysis would have to be destructive), but this might be an avenue worth exploring if the right specialists were involved. With hypothetical unlimited resources, we might also work hard to track down the whereabouts of the skins originally said to be associated with these skulls.

PJ: You did this research in your spare time. Are you currently working on another academic project?

DN: Personally, I’m constantly working on other academic projects and currently have three or four manuscripts in review, and many more in various stages of completion and awaiting submission. I struggle to keep up (since finding time for research and paper-writing is hard), and I rely on the kindness and co-operation of colleagues when it comes to finances and resources (I’m affiliated with the University of Southampton, UK, so do have an academic base of sorts), but it’s far from easy.  I’m still looking for a wealthy benefactor who might fund my research (hint hint).

PJ: How did you first hear about PeerJ?

DN: I’ve long been interested in the open access movement and can only see the increased availability of my research as a good thing. I knew about the journal as soon as it was launched, thanks to chatter at conferences and blogs – I’m pretty sure I first heard about it from OA advocate Mike Taylor (who blogs both at SV-POW! – the Sauropod Vertebra Picture of the Week blog – and at The Reinvigorated Programmer).

PJ: What are the advantages for you to publish your work open access and with PeerJ?

DN: Two main reasons resulted in my choice of PeerJ for this research. Firstly, I wanted it to appear in an OA journal, and PeerJ exactly fits the bill here. Secondly, this paper had been (unfairly and unethically) rejected by a previous journal and I was finding myself unable to make the time to reformat the references (I’d actually written to people high up the chain of command in the journal concerned, and gotten them to appreciate the unfairness of the rejection; after months of deliberation, they’d agreed to look at the paper again, but this required time-sapping, redundant reformatting of our paper’s supplementary data). PeerJ’s brilliant policy of not having a specific reference style saved me a huge quantity of time and was also a major draw. These weren’t the only reasons for submitting to PeerJ, of course – the quality and look of the journal, the good standing and reputations of its editors and so on, and its policies as regards CC (Creative Commons) and OA and so on, also contributed to the decision.

PJ: What was your experience of the PeerJ publishing process?

DN: My experience was wholly positive. The staff were friendly, co-operative and swift to respond via email no matter what the query or topic of discussion. Review was swift, performed by appropriate experts who reviewed the manuscript fairly and with appropriate rigour, and the overall turnaround time to publication was short. I’m not sure that things have ever gone this smoothly with any other manuscript I’ve published (and I’ve published over 60 papers now).

PJ: Was there anything that surprised you with your overall experience with us?

DN: I wouldn’t say that anything really surprised me, since I knew what the deal was before the wheels were in motion, so to speak. Nevertheless it’s pleasing to have things happen as smoothly, and as quickly, as you hoped they would.

DN: I wish PeerJ every success for the future, and hope that it will become ever better known and more influential. Based on my experience, I also fully plan to publish there again.

PJ: Thank you for your time!

Join Dr Naish, and thousands of other satisfied PeerJ authors – send your next article to PeerJ!