The Reception to Dino Joe

On Tuesday, we published “Ontogeny in the tube-crested dinosaur Parasaurolophus (Hadrosauridae) and heterochrony in hadrosaurids” by Dr. Andrew Farke et al.

This fascinating paper describes the most complete skeleton ever found of Parasaurolophus, a duck-billed and plant-eating dinosaur. It’s also the youngest: The fossil is a rare baby dinosaur, under a year old when it died 75 million years ago. It got a lot of great coverage including spots on NBC LA, CCTV, Utah Public Radio, Slate, Nature Magazine, Science Magazine, The Guardian and many others. 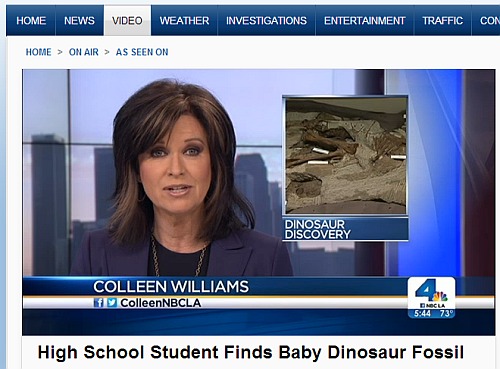 With well over 20,000 views of the peer-reviewed paper (in the first 3 days alone), and over 100,000 visitors to the museum’s custom web-site, this is already the most read paper that PeerJ has published, and is clearly one of the most accessed (as well as accessible) paleontology discoveries ever. This publication is a testament to the power of open access, and so it was great timing to have published it in Open Access Week.

Given the broad attention the article generated, we asked Dr Farke to tell us in his own words about his incredible, but tiring, week.

AF: “What happens when you publish the world’s most open access dinosaur? Pure pandemonium!

On Tuesday, my co-authors (recently graduated high school students Derek Chok, Annisa Herrero, and Brandon Scolieri, along with paleontologist Sarah Werning) and I published a paper in PeerJ describing the nearly complete skeleton from a baby Parasaurolophus. Beyond the “gee-whiz” factor of a dinosaur fossil (found by another high school student!), the specimen nicknamed “Joe” tells us a whole bunch about how an iconic plant eating dinosaur grew some bizarre headgear. We also decided to make this the most open access dinosaur ever–not only was the paper published in an open access journal, but all of the digital scans and imagery were archived to Figshare. Although parts and pieces of digital scans had been made public for other fossils, this was the most comprehensive dataset yet available for any dinosaur. Because these sorts of scan files aren’t necessarily easily accessible to the general public, we set up a website (www.dinosaurjoe.org), so that anyone could view the fossil from all angles in 3D without the aid of specialized software.

Of course, we wanted to let people know that an open access dinosaur had arrived! We crafted a press release and sent it out the week before publication, and waited. And waited. I was a little worried that we had sent it out too soon, or that it had landed without a sound.

Fortunately, those worries were unfounded. By the time that the publication date rolled around, things were completely out of control! The phones at the museum were ringing off the hook, television trucks were lined up on the road outside the exhibit hall, and over 100,000 visitors saw the specimen on-line. It was a fantastic day for our museum, our school, and open science.

On a personal level, I am proud of the results of the efforts of everyone involved. Kevin Terris, the high school student from The Webb Schools who found the fossil, rightfully received global recognition for his incredible find. Brandon Scolieri, Derek Chok, and Annisa Herrero, the three Webb students who helped write the paper, did an incredible job on their specific research focuses. Sarah Werning‘s work on bone tissue allowed us to estimate the age of the dinosaur, adding critical context to the study. This all added up to a comprehensive paper. And most of all, I am proud of how open the study is! It is truly amazing to be able to share this fossil with the world, so completely. PeerJ helped this happen!

Two things really capped this experience for me. The first was seeing the well-deserved congratulations pour in for Kevin Terris on his discovery. This is not his last major find, and I am also excited that a paper he co-authored during his time at Webb will be published before the end of the year! The second highlight of this week was a set of comments from Ben Richmond, writing about the open access angle of the find for The Motherboard blog at Vice.com:

“It allows people like me who never get to touch dinosaur skeletons, even if we really want to, to spin Joe around and look at him up close from any angle we want…If this is the future of museums, museums [are] going to be awesome for a long time.”

For those of us who want to share our fossils with the world, can it get any better than this?” 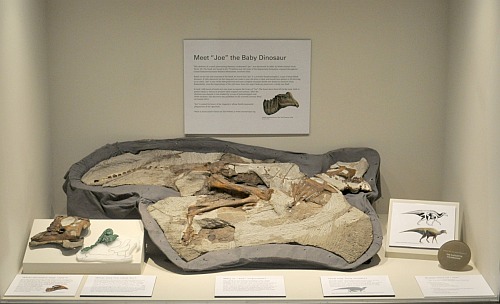 The skeleton of “Joe” the baby Parasaurolophus ready to meet the public. CC-BY, by Andy Farke.