We know that many of you have been eagerly awaiting the Naming of the Monkey, but we wanted to wait for all time zones to finish Monday the 4th, before we made a decision. We received a lot of great entries – mostly via Twitter, Facebook and this blog – and it was a hard call. Naming a Monkey is not something to take lightly, Monkey will have to live with this name and doesn’t want to be teased by the 200 pound gorilla when using the monkey bars.

After much deliberation, cogitation, and general throwing of bananas at a dart board (something we cannot recommend) the decision of the PeerJ Monkey Naming Committee is… “Charlie”! PeerJ published its first articles on the birthday of Charles Darwin, and represents an evolution in scientific publishing, so we couldn’t think of a more appropriate name to represent everything that PeerJ stands for. PeerJ Charlie has already started tweeting, follow him at: https://twitter.com/PeerJCharlie

The first person to suggest Charlie was Dave Hone, via Facebook. A PeerJ Charlie T-Shirt and PeerJ Charlie Mug will be swinging its way to Dave as soon as he gets in touch!

Thank you to everyone who entered. We wanted to call out an Honorary Mention to Melissa Parker who suggested ‘Pilot’ and depicted Pilot soaring across the sky. Finally, the Exceptional Mention for Worst Pun has to go to Jan Velterop with ElsePeer… 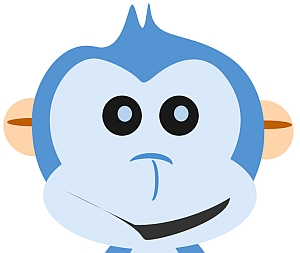