Name that Monkey – A PeerJ Competition

Many of you already know and love the PeerJ Monkey Mascot. Up until now, we just called it “Monkey” and Monkey has already starred in its own line of T-Shirts, Mugs, Stickers and Pins. But it doesn’t seem right for Monkey to go nameless anymore, especially now that Monkey is an International Media Star and Monkey’s Infinite Troupe of Monkey Co-authors have almost finished their Shakespeare play.

So, to help celebrate our launch, we are holding a ‘Name the Monkey’ competition. We don’t know if Monkey is male or female; old or young; what species of monkey; or from what part of the world (universe?), but we are hoping you can help us out! Please suggest suitable names and a backstory for Monkey. Why is Monkey holding a test-tube and a pencil? Why that enigmatic smile? And what is Monkey sitting on? Only you can tell… 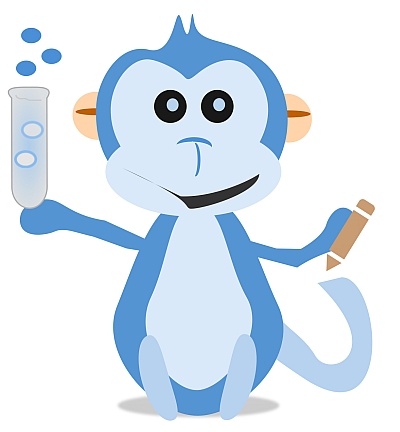 Simply make a Post(s) or Comment(s), with your suggested name and any suggested backstory. You must include the hashtag #PeerJMonkey and you must include a link to a PeerJ page (you choose the most appropriate link). Otherwise all remaining characters are yours, but there are bonus points if you can make the Monkey appear in unusual places on the internet, or graphically re-imagine the Monkey…

On Monday 4th March we will make a decision, and announce the new name. Humorous, scientifically oriented, or generally ingenious names are preferred!

And what is the prize? Fame clearly. Fortune may have to wait. But we will open a twitter account in the name of Monkey, and Monkey will start tweeting (with its own personality). Plus, you get a Monkey branded T-Shirt and a Monkey Mug! Short of a lifetime’s supply of bananas, it doesn’t get any better than this.

So stop monkeying around and send us your entries!