The 10th Workshop of the Selenium and Sulfur Redox and Catalysis Network (WSeS-10) took place at the Federal Fluminense University. WSeS-10 was organized, as in previous editions, as a pre-conference of the International Conference on the Chemistry of Selenium and Tellurium and was attended by several speakers of that area.

The WSeS series has become an internationally consolidated event that brings together scientists who develop multidisciplinary research projects related to Selenium, Sulfur and redox catalysis. Its purpose is to promote a space for young researchers to present their recent results in a stimulating and multidisciplinary environment. Furthermore, it provides discussions about the works and critical reflections for the development of strategies aimed at progress in the area. To establish this atmosphere, the event has a large number of participants, including undergraduate and graduate students, as well as internationally renowned speakers who come to honor the event.

WSeS-10 had 106 participants from 9 different countries attend the 26 lectures, 1 round table and 24 poster presentations. The scientific program of the event showed the recent developments within the chemistry of organochalcogens encompassing studies in the areas of organic, inorganic, biochemistry, among others. 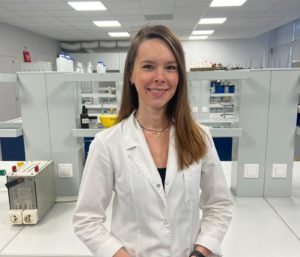 After obtaining my Master’s degree in Pharmacy at the Medical University of Gdansk, I wanted to continue my work in science and explore the world of organic chemistry. A PhD position at the group of Prof. Jacek Scianowski started my journey with organoselenium chemistry. In 2018, I received my PhD degree in Organic Chemistry at the Nicolaus Copernicus University in Toruń and I am currently working there as an assistant professor. My scientific interests are related to the design and synthesis of new organoselenium compounds (OSeCs). I am mainly focused on the analysis of the influence of particular structural features of the synthesized OSeCs on the ability to reduce hydrogen peroxide, their glutathione peroxidase-(GPx)-like activity, the structure-dependent cytotoxicity of OSeCs, towards breast and prostate cancer cells, and recently on increasing their bioavailability.

Being a synthetic organic chemist with a pharmaceutical background I was always interested in the field of medicinal chemistry and developing new compounds for therapeutic use. Selenium is a unique element, an important micronutrient necessary for the proper function of the cardiovascular and nervous system and the proper structure of bones and joints. It is also an important structural element that builds up the active sites of several selenoenzymes like GPx – an efficient peroxides scavenger that keeps the amount of free radicals and other reactive oxygen species in physiological concentrations. The bio-reactivity of organoselenium molecules and their successful evaluation as antiinflammatory, antibacterial, antiviral and anticancer agents directed my interest towards the search for new Se-therapeutics. My goal was to combine the biological activity of the selenium atom with appropriate structural environment of the molecule, that would result in high therapeutic potential and bioavailability.

Can you briefly explain the research you presented at WSeS-10?

At the WSe-S10 I presented a new synthetic protocol that enables to synthetize a well-know group of biologically active Se-compounds – benzisoselenazolones. The procedure is based on direct UV-irradiation of corresponding diphenyl diselenides, solubilized in an environmentally safe solvent with no additional reagents or additives. Under mild reaction conditions we are able to fully convert a Se-Se bond to a Se-N bond. It is an example of first radical isoselenazolone synthesis directly from their diselenide precursors. Thanks to this achievement we will be able to obtain new compounds much faster!

The project presented at the workshop is a part of wider research on the synthesis of highly bioavailable antioxidants and molecules of biological importance. It is closely related to the habilitation thesis that I am preparing. In the future, I am planning to expand my research towards other applications of OSeCs, particularly in material science.

I want to take this opportunity to invite everybody interested in organoselenium chemistry to the next workshop WSeS11 that I am honored to chair in 2024 in Toruń, Poland.

Theresa Appleson PhD candidate at the University of Regensburg, Germany.

I grew up in Munich, where I also did my undergraduate and graduate studies at the Technical University of Munich (TUM) focusing on Organic and Macromolecular Chemistry. During my studies I was able to visit laboratories in Nice and Cardiff for research internships. I completed my Master’s degree with Prof. L. Hintermann working on the elucidation of the structure of the New Zealand Glowworm luciferin. My passion for Organic Chemistry drove my decision to move to Regensburg to join Prof. A. Breder for my PhD studies working on photoredox catalysis and alkene functionalisation. In my time outside the lab, I enjoy cooking with my friends as well as hiking in the alps and reading.

Can you briefly explain the research you presented at WSeS-10?

My research focuses on the direct oxidative functionalisation of alkenes. As unsaturated hydrocarbons present common building blocks in the synthesis of natural products and pharmaceuticals, my work contributes to finding new pathways for their build-up and further transformation. Traditionally, oxidative functionalisations of alkenes are realised by the usage of metal-based catalysts. Especially Pd-centred catalysts are reported to be able to transform a variety of mostly styrene- and terminal alkene-structures. I try to complement this specificity with a new catalytic system using non-functionalised, non-terminal alkenes. A dual catalytic system consisting of a photocatalyst and a selenium catalyst enables the desired transformation using light as a cheap energy source and oxygen from the air as the terminal oxidant. In previous reports our group was able to demonstrate the applicability of this system onto various substrates (Scheme 1). In this context, I focus on the design of (enantioselective) alkene functionalisations such as aminations, which I had a lot of fun presenting at the WSeS-10. 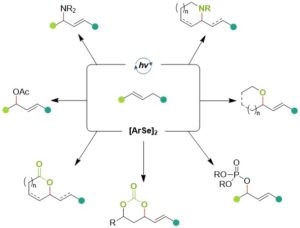 In reported literature, described methods for the oxidative functionalisation of alkenes usually inhabit a poor atom-economy and are generating high-molecular waste. To make this method more environmentally tolerable, we developed a catalytic system that utilises autoxidation (oxidation with oxygen from the air) as the terminal oxidation step. This process generates only H2O as a waste product, making this chemistry greener to comparable methods. The combination of two catalytic systems and their perfect collaboration to introduce economical reactions makes this chemistry so fascinating for me.

Currently I am focused on developing a reaction protocol for the challenging enantioselective intermolecular amination to furnish allylic amines. 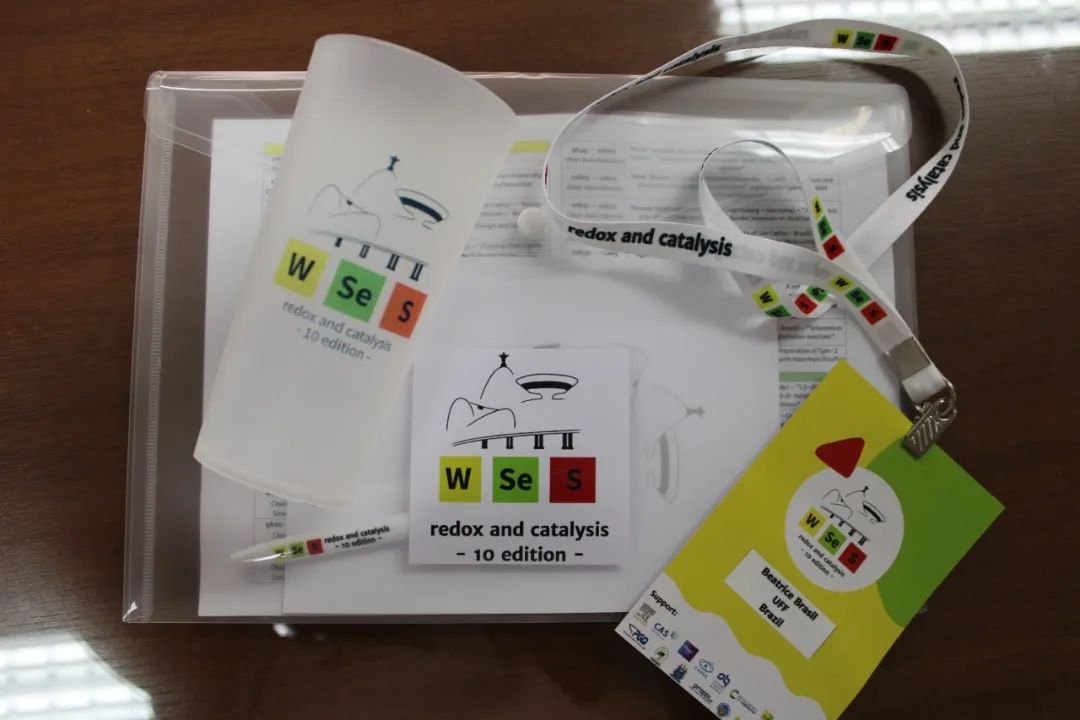