Following PeerJ’s previous collaborations with the International Conference on Robot Intelligence Technology and Applications (RiTA), we sponsored a PeerJ Award at RiTA 2022 – the 10th meeting of this series. RiTA 2022 was held at Griffith University (Gold Coast Campus), Australia, on December 7 – 9, 2022. The RiTA series brings together researchers, scientists and experts in the field of robot intelligence technologies, and facilitates robotics community and collaborations. 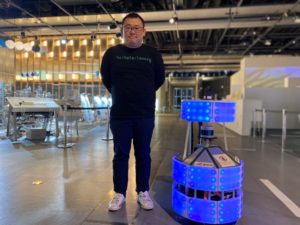 My name is Yuta Sato. I am a first-year master’s student and belong to AIST and Tokyo University of Science. I studied control theory and robotics in the Department of Mechanical Engineering until my third year of university, and I have been working on research and development of robot intelligence at AIRC in AIST since my fourth year of university.
I have a strong interest in planning in dynamic environments above all autonomous mobility techniques. I specialize in motion and path planning for autonomous robots, especially in crowded places.

When I was in kindergarten, I saw ASIMO (humanoid robot) at the HONDA dealer first time in my life. I still can clearly remember that I was extremely fascinated by the fact that a non-living thing could think and move like a living thing. After my assignment to the laboratory, I have started research on autonomous mobile robots. So, I enjoy researching techniques linked directly to robot motion, and I am very keen on motion planning.

Can you briefly explain the research you presented at RiTA 2022?

Autonomous movement in crowds of pedestrians is an important technology for robots to be active in human living spaces. The mainstream of autonomous locomotion attempts to navigate through dynamic environments with pedestrians by repeating the recognition and planning the path in a short period of time (only using currently observed information). While this method works well in relatively clearing, in dense crowds, the robot may behave irrationally or cannot move forward. So, we have predicted the trajectory of pedestrians around a mobile robot and generate paths based on the predictions in an environment with many pedestrians.

In this study, we predicted the future trajectories of pedestrians from a running robot by estimating self-position and tracking the pedestrians using the robot LiDAR. To do this, we applied a pedestrian trajectory prediction method based on a bird’s eye view, which has been actively studied recently. Specifically, by expressing the predicted pedestrian trajectories as probability distributions, we generated cost maps for each future time step, which can be used for the robot’s path planning. Furthermore, by planning paths in spatiotemporal for multiple time-series cost maps, we achieve smooth motion that adapts future pedestrians in crowded places.

We would like to realize a world in which autonomous mobile robots move around in people’s living spaces. In our daily life, there are various crowded environments, such as train stations during rush hour and stadiums during sports games and concerts. We aim to develop robot intelligence that can move freely in such crowded environments. In this study, we found that localized avoidance does not necessarily require a long time prediction, but the input for spatiotemporal planning requires high prediction accuracy even in a short period of time. We would like to further improve the prediction performance for varied pedestrians. We expect the clustering of behavior patterns improves accuracy of predictions of people approaching, passing by, or disturbing the robot.