Advice to My Younger Self – 5 Tips for Early Career Researchers from Dr. Pedro Silva 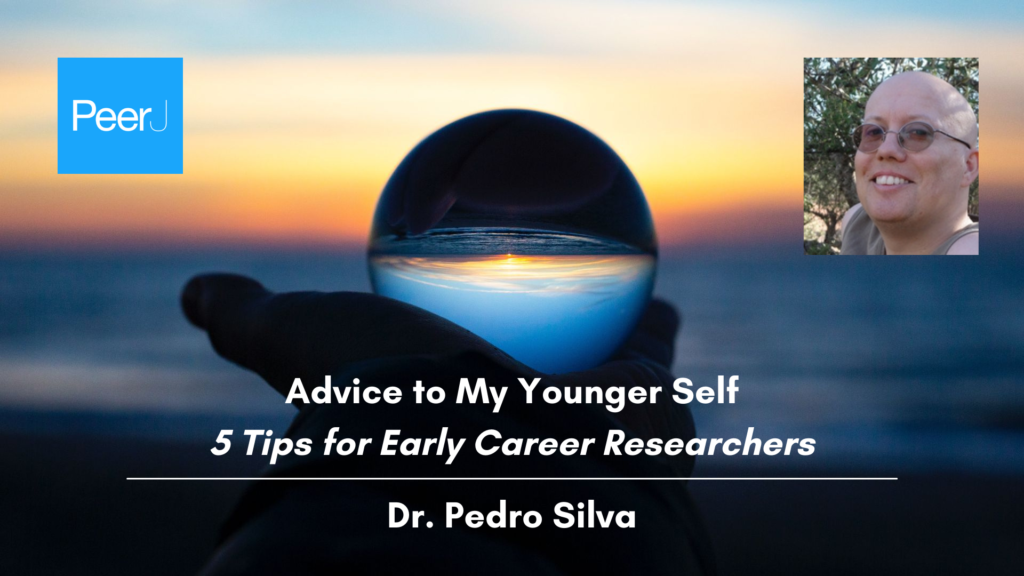 We invited Dr. Pedro Silva to share his thoughts. Pedro is a PeerJ Gold Contributor and Section Editor for Biochemistry, Biophysics and Molecular Biology.

The “eureka moment” in a tough problem often arises when our brains make unexpected connections between the problem at hand and some other strategy/paradigm, which suggest (for example) new methods to try, or possible new venues for hitting a possible solution. This naturally requires us to branch out our reading from the hard core of literature related to our research, but there is a catch: everybody’s memories have a limit, and one can only get a certain amount of broad knowledge into our brains before the room for new facts in our core interests starts to dwindle.

During my PhD,  I developed two simple habits that I later realized were not as widespread as their simplicity would lead one to expect. The first was reading the introductions of PhD theses. These introductions are most often written in a much lighter style than the research papers that make up the bulk of the theses, and can therefore be read without much effort. Their relative simplicity also makes them much more memorable than technical papers. There are now public repositories that make finding theses much easier than 25 years ago (e.g.  https://uba.uva.nl/en/search-the-collection/how-to-find/phd-theses.html?cb )

I would also casually browse through the latest issue of “Biochemistry”, just looking at the titles and stopping at some random papers which happened to catch my eye (either due to some interesting scheme, or an odd-looking spectrum). This was not a deliberate effort to get a very deep understanding of disparate subjects:  That habit was both a way to hit “pause” on my schedule and a way to get some new ideas (even if very superficial) into my mind. I found this to be a remarkably simple way to fuel my scientific creativity. The move away from hard-copy journal issues has made such serendipitous findings less natural than when one can casually flip through the pages of a journal issue, but I still keep following the RSS feeds of several journals in my area. I use cloud.feedly.com for that, but I am sure there are many other RSS readers around.

Bob Creighton (Univ. Louvain-la-Neuve) would tell his students something along the lines of : “Never take on the Americans. They will throw a bunch of Post-Docs at you and there is no way you can compete.”  Mutatis mutandis, I would say: if your area has n people studying the exact same thing, do not become the n+1 unless you have good reasons to believe you have more resources than the average initial n people there. It is not a matter of talent or raw intellectual power: the most intelligent and motivated PhD student working with a single one-beam spectrophotometer and without (e.g.) a plate reader will never be able to compete with an average student who has access to plate readers, fluorometers and NMR spectrometers. If you do not have many resources, study an obscure enzyme, or  an “out-of-fashion” microbe. You will not get papers in Science, Nature or other flashy journals who expect “sexy” research, but you will contribute solid data to the edifice of science, get good publications, learn, and (above all) have fun doing science instead of living under the stress of being scooped or feeling that, no matter how hard you try, you will not get a break.

The flip side of this advice is that sometimes it appears to me that in the quest to find something accessible to study  one may be tempted to do repetitive science: using the same system with different molecules at a time to get cheap look-a-like papers: for example “we have analyzed the maze behavior of mice under ethanol (1st paper) . Let us do other papers using fructose  (2nd paper), aspartame (3rd paper), heroin (4th paper), with strobe lights and ethanol (5th paper), with strobe lights , ethanol and techno-house music (6th paper)”. That will be harmful to you: you do not want to become either a one-trick  pony or a salami-slicer. Focus on something accessible and delve on it as far as you can with your limited resources to get further details, but do not fall into the temptation of turning your research into a production line of (mostly) indistinguishable papers.

Social anxiety often prevents us from engaging high-status scientists, fearing that our inquiries might seem silly or otherwise show we did not understand their talk. Like so many other mental quirks, this is probably an evolutionary atavism that came from times when we lived in small bands and bothering a high-status person would risk some social shaming one would not be able to escape from. We do not live in that ancestral environment anymore: in a conference with hundreds of people, most high-status scientists will not even remember us if we happen to ask them a silly question. But if what we ask turns up not to be silly, the upside is immense: we get to further our understanding and even (if our question happens to be very good)  we may even get to be remembered by this expert.

Peer-reviewing is often a thankless job, but it is also a good learning experience, both in respect to the science one is reading “first-hand” but also in finding out how it looks from “the other side”. By reviewing, you will learn how other workers deal with onerous revision requests, what kinds of unconscious writing habits make it harder for the reviewer to follow the writer’s train of thought,  and in some journals – including PeerJ’s Tokens program – you get discounts to help pay for the future publication of your papers. Young Post-docs often do not get review requests because many have not yet been corresponding authors and their email addresses are therefore not visible. Many labs do not have a web presence, and many who do only list the names and addresses of the lab leader. This makes it harder for editors to find willing reviewers (since the same people keep receiving scores of reviewing requests) and prevents early-career researchers from contributing and benefitting from peer-review. If your lab does not have a web presence, or does not list your email  there, please consider asking the homepage maintainer to add that info.

Working too hard is not the same as being productive

Science is a passion, a calling, etc. but it is, at the end of the day, just a job. You are not its slave, and anyone who tries to guilt you into working until you drop does not have your best interests at heart (I remember some horror stories about some Professor who told his students that they had the obligation to work ever harder because “fighting cancer depended on their work”) . There are times when 12h- or 16h- days in the lab will be needed. But if you find that your work is taking all your energy, you must pause. No one can do their best work when exhausted, and scientific acumen is quite diminished when you do not have a decent amount of rest and play.  Force yourself to make a pause every day for games, non-work-related reading, strolling outside, or whatever you need to recharge your batteries. A scientist who works 6h a day for 40 years in top shape is much more productive, and undoubtedly happier, than one who works 10h days non-stop, leaves the lab exhausted, has no time for their family, and decides to quit after one or two decades of feeling miserable.

“I was originally raised as an experimental Biochemist. My PhD research (1996-2000) centered on the biochemical characterization of the soluble hydrogenase of the hyperthermophile Pyrococcus furiosus. Eventually, the research focus broadened to include other metalloproteins from P. furiosus, which were characterized by biochemical, electrochemical and spectroscopic methods (electron paramagnetic resonance, UV-Vis spectroscopy, cofactor analysis, bioinformatics, enzymology, etc.).

In 2001, after completing my PhD, I became an Assistant Professor at Universidade Fernando Pessoa (Porto, Portugal), where I am now an Associate Professor. My research focus then moved to the computational study of enzymatic and organic reaction mechanisms using quantum chemistry and molecular dynamics methods.

I have been an Academic Editor for PeerJ since September 2015, and Section Editor for its “Biochemistry, Biophysics and Molecular Biology” section since its creation in February 2018.”

This is an ongoing blog series so keep an eye on the PeerJ blog to see more advice from our Editorial and Advisory Board Members. If you would like to contribute to the series please do get in touch: communities@peerj.com