PeerJ are delighted to announce the winners of three PeerJ Awards from the Progressive Palaeontology (ProgPal) 2022 conference, this year held at the University of Lincoln in June. ProgPal is a UK-based annual conference for postgraduate research students and provides a framework for developing palaeobiologists in which to present ideas and undertake discuss on their work amongst peers. The meeting is run by students with the support of The Palaeontological Association.

If you are organising a conference and would like to offer a PeerJ Award, please email communities@peerj.com 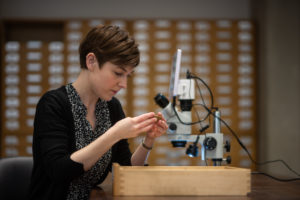 I study fossilisation: that is, what happens after the death and burial of an organism, and how organic matter moves from the biosphere to the geosphere. I’m especially interested in how soft tissues fossilise; things we don’t expect to preserve, such as internal organs like the brain, the eyes, or the heart. And to understand the way in which these persist in deep time, I study the preservation and degradation of the biomolecules (the proteins and lipids) that make up these tissues.

I worked for many years in the funerary profession as an undertaker and embalmer, where I first became fascinated by the complex processes of death and decomposition. These processes constitute the field of taphonomy, and I wanted to explore it on a solid scientific footing – so I went back to school! I’ve been exploring taphonomic phenomena further and further back in time since: I went from working with the recently deceased to studying ancient human remains during my MSc in Forensic Anthropology and Bioarcheology, before beginning my PhD in Palaeontology – where I’m looking as far back in Earth’s history as the Cambrian Period, some half a billion years ago.

You won the Best Lightning Talk award at ProgPal 2022, can you briefly explain the research you presented?

I’ve been intrigued to discover that, however far back in the fossil record and wherever on the globe we look, we find the brain preserved where other organs have perished. How does this notoriously decay-prone tissue fossilise in such diverse environments, and such unappreciated numbers through the millennia? The sheer number of brains preserved in the absence of any other soft tissues suggests the possibility of an unknown pathway to fossilisation that’s unique to the brain. I’m investigating this curious phenomenon through the molecular mechanisms underpinning it: particularly the interactions between proteins and lipids, and bacterial mineralisation with biogenic iron.

To test my hypotheses, I’m combining experimental decay of modern brains with molecular characterisation of ancient ones. I’ve buried more than 70 mice under a range of environmental conditions, and over the next six months I’m digging them up and sampling their brains for proteins, lipids, microbial DNA and metabolites. The data generated will create a ‘time lapse’ of tissue transformation in the early post-mortem interval, and represents a framework within which we can begin to interpret the same molecular data from ancient brains. We’ve started by looking at eight assemblages of human brains that span the last 8ky of the archaeological record, and we’re already seeing some really exciting results! So watch this space. 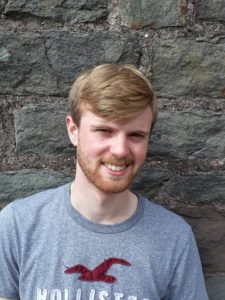 I have been interested in palaeontology since I was very young and did my undergraduate degree in Palaeontology and Evolution (MSci) at the University of Bristol. Specifically, I am interested in the interaction between form and function and how this manifests across major evolutionary transitions.

During my undergraduate degree I was fortunate enough to carry out some research projects alongside Professor Emily Rayfield, my then personal tutor. These projects examined the link between form and function in the earliest limbed vertebrates, which sparked my interest in looking at similar problems in other major events throughout the history of life. This interest led me to my PhD looking at the form/function interactions at the origin of mammals.

You won the Best Poster award at ProgPal 2022, can you briefly explain the research you presented?

In this research I used micro-CT scanning to examine the 3D morphology of the jaws and middle ears of non-mammalian cynodonts (Brasilodon and Riograndia) from South America. These cynodonts are very important for understanding the evolution of early mammals due to their phylogenetic proximity to mammaliaformes and the number of quality specimens preserved. We found new anatomical details in both species. Brasilodon  was found to be not as derived as first thought, with postdentaries around the size of other probainognathian cynodonts and no sign of a dentary-squamosal connection. By contrast, Riograndia possessed both a robust quadrate-articular connection and a connection between the dentary and the squamosal. This suggests that different groups of cynodonts evolved a dentary-squamosal connection independently, and that jaw evolution in non-mammalian cynodonts was homoplastic.

Homoplastic jaw evolution so close to the origin of mammals is exciting, and suggests that there is more complexity at this key stage of mammal evolution than was previously thought. Our next step is to use micro-Ct scanning to investigate the anatomy of other cynodont species around this point to fully understand how key mammalian traits evolved. 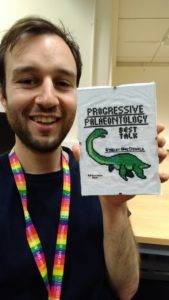 I did my undergraduate degree in Natural Sciences at the University of Birmingham, majoring in Physics and Earth Sciences. Following this, I spent several years teaching English as a Foreign Language in Italy and Spain, before returning to the UK to start a masters in Palaeobiology at the University of Bristol last year.

And what about your research interests?

I have diverse research interests including macroevolution, diversity dynamics, and biomechanics. I’m currently working on my thesis, which is focused on the macroevolution of skin and fur colouration in primates. Primates are extremely colourful in comparison to other mammals – while most other mammals tend to be quite muted blacks, browns, or greys, many primates have evolved very ostentatious colouration, particularly with bright red skin or red-orange fur (e.g. the frankly terrifying face of a mandrill or the striking mane of a golden-headed lion tamarin). Primates also happen to be the only mammalian group of which some members have evolved trichromatic colour vision – all other (eutherian) mammals are red-green colourblind, while some primates, including humans, can differentiate between these two colours. As primate colouration is sometimes used to communicate social information such as social status or fertility, we might expect that the evolution of this colouration is linked to this enhanced ability to perceive colour – there’s probably not much point in using bright red skin to signal your virility to a potential rival who’s red-green colourblind. I’m using phylogenetic comparative methods to see if this link exists across the order and within different primate subgroups.

I first became interested in macroevolution during the first week of the masters programme, when myself and another student had to deliver a presentation about principal component analysis – arguably not the most exciting subject but I thought it was fascinating that you could use such sophisticated techniques to attempt to answer really fundamental questions. In particular, I think it’s amazing that we can use such techniques to tease out patterns in nature that are otherwise not immediately obvious, and examine how life evolves at grand scales despite not being able to perform repeatable experiments In evolutionary biology as in other scientific disciplines.

You won the Best Presentation award at ProgPal 2022, can you briefly explain the research you presented?

As many primates are really colourful in comparison to other mammals, and many primates also have better colour vision than other mammals – I’m trying to clarify whether there’s an evolutionary link between these two traits. For the ProgPal talk, I was presenting some preliminary results that suggested that there may indeed be such a link in one subgroup of primates, the strepsirrhines (lemurs, lorises, and galagos), but that it may work in a slightly different way to how we expected.

I’m now extending this research to look at trends within the order as a whole, looking at both male and female colouration, as we expect the evolutionary drivers to differ between the sexes.