PeerJ recently sponsored an award for Best Poster, as presented by an Early Career Researcher, at the Euro Evo Devo 2022 conference in Napoli, Italy. We spoke to the winner of the award, Bethan Clark from the University of Cambridge, about her research. 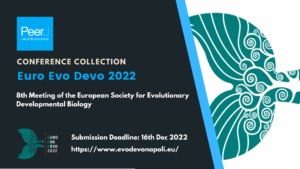 Bethan Clark PhD student at the University of Cambridge, UK. 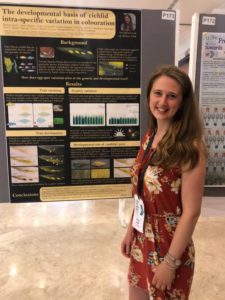 It was during my undergraduate degree that I became interested in developmental biology, and then more specifically evo-devo. A first year course on introductory developmental biology captured my interest in this field because I found the concepts and questions fascinating. How does an embryo go from a single cell to many specialised cells in the right arrangement? This core question of pattering has stuck with me, strengthened by a summer research placement I did in the lab of Ben Steventon looking at zebrafish mesoderm differentiation. But it was a third year lecture series on evo-devo that I found really exciting, because I realised there was a field that combined my interests in both developmental and evolutionary biology. I was fortunate that my PhD programme included rotations; learning about cichlid fish and the opportunity they present for evo-devo in my rotation with Emília Santos was another exciting moment.

Can you briefly explain the research you presented at Euro Evo Devo 2022?

With genome wide association studies we identified candidate genes associated with variation in spot number and colour in A. calliptera. The colour GWAS is a more recent result, so we have done more work focusing on number variation. For this, there was an association with a SNP in the non-coding region of oca2, a gene required for melanin synthesis in the black pigment cells, melanophores. However from imaging fin development, we don’t see a direct contribution from melanophores to spot formation: instead, reflective iridophores accumulate followed by orange xanthophores. Therefore to infer the role of oca2 in spot variation, we have to identify its role in spot formation. We have used CRISPR-Cas9 to knock-out oca2 and breed a mutant amelanistic line. I’m currently imaging fin development in the mutants to compare to our wild-type imaging. So far, it seems the iridophores in the mutants don’t accumulate or spread as quickly across the fin, so I suspect there may be interactions between iridophores and mature pigmented melanophores which are lost in amelanistic mutants.

What are your next steps? How will you continue to build on this research?

I’m excited by the differences in amelanistic fin development, even though they’re subtle. When I’ve finished the imaging series I will analyse the images for a thorough characterisation. Comparing these to wild-type spot development should indicate the role of oca2 in wild-type spot development. I’m intrigued by possibility that melanophores may influence iridophores and oca2 may be required for this, because modelling work in zebrafish stripe formation indicates these kinds of interactions between melanophores and iridophores in that system. With a suggested role for oca2 in spot development, I can infer how genetic variation in oca2 influences spot number variation through development. I am keen to model fin colouration development, similar to the work in zebrafish stripe formation. Modelling egg-spot development would allow us to investigate the inferences we plan to make from the mutant fin imaging analysis.

We’re also characterising the wild-type development in more detail, to identify the aspects of spot development from which variation can arise. With our stereomicroscope imaging we could follow the formation of the first three spots, which is a fairly consistent process, though there are points which vary between individuals. I’m now following the development of later spots by taking weekly photographs of the fins, and plan to continue this for several months to document variability in the formation of later spots. When presenting my poster at EuroEvoDevo I received lots of interesting feedback and ideas for further experiments, which I’m planning to look into. This includes live-imaging fin explants and comparing egg-spot development in fish raised in different social conditions. I’m looking forward to seeing where the project will go. 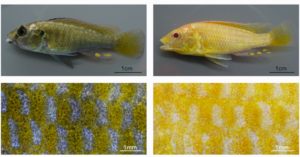