We would like to take this opportunity to thank Diogo for the contribution he has made over the past year as Section Editor. We are delighted that he will continue to support PeerJ as a valued member of the PeerJ Life and Environment Editorial Board. 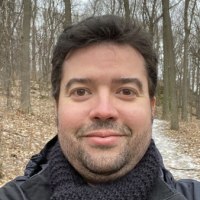 Can you tell us a bit about yourself, and what brought you into your research?

Please explain the aspect of ecology that your research focuses on.

My research programme tries to integrate macroevolution and phenotypic evolution with metacommunity ecology to understand the distribution of biodiversity in space and time. Most of my PhD students work with topics related to macroecology, biogeography, spatial and geographical ecology, often using a combination of phylogenetic comparative methods, GIS, and geometric morphometrics.

You have been a valued member of the PeerJ Editorial Board for over two years. What excited you about PeerJ that persuaded you to become an Academic Editor?

I first applied to be an Academic Editor back in early 2020. By that time, I had already gained some editorial experience, being on the editorial board of zoological and herpetological international journals, such as Amphibia-Reptilia, Herpetology Notes, and NorthWestern Journal of Zoology, besides being the EiC of Check List (now owned by Pensoft, but self published at the time). Back in the day when I applied to be an AE, it happened that I wanted to get more experience with editorial service in open access mega journals. I served on the editorial board of PLOS ONE for a short period, but didn’t enjoy the experience. At PeerJ I noticed a big change; all the staff were pretty responsive and helpful, and I had this “sense of belonging”, which I can’t explain how it feels, but I didn’t have in PLOS ONE. Plus, even before the PeerJ Tokens programme, as an AE, I benefited from a big APC discount. This is why we chose PeerJ to publish a paper we were writing at the time (Idiosyncratic liver pigment alterations of five frog species in response to contrasting land use patterns in the Brazilian Cerrado).

What have you most enjoyed about your role as Section Editor of the Biodiversity and Conservation section over the past year?

My duties were two fold; approve final decisions on papers that came from Academic Editors, so they could be sent to authors, and design and oversee the development of the Special Issue ‘Innovative Uses of Remote Sensing in Biodiversity Conservation‘. It was a great responsibility to be in charge of the final decision on manuscripts; this was the last filter before they actually got published. I had the opportunity to work with big names in the field, such as Stuart Pimm and Scott Edwards. Mi hermana Argentina Patrícia Gandini also helped a lot, it was such a pleasure to have had this opportunity to work with her. She was very committed to work and in all situations in which a lengthier discussion was needed, she always showed to be kind and receptive.

What would you say is the ‘best’ paper you have seen as a Section Editor and why?

I would say these two are my favourites: Biogeographic evidence supports the Old Amazon hypothesis for the formation of the Amazon fluvial system and Synergistic effects of climate and landscape change on the conservation of Amazonian lizards. Those papers will surely have a high impact on understanding the dynamics of the Amazon Forest in the past and in the future.

What would you say to other members of the Editorial Board that may be considering a Section Editor role at PeerJ? Is it something you would recommend?

I would just say, Go for it! It was such a nice experience working closely with Patrícia, Lindsay and Stephen. I definitely learnt a lot from them, both in the day to day management of the papers assigned to the Biodiversity and Conservation Section and in designing the Special Issue on remote sensing. We received very good submissions and I’m really excited about what the Special Issue will become once it’s published.

Thank you for your thoughts, is there anything else you want to highlight?

Perhaps, I just wanted to highlight that I have recently got funding for my first research project as a PI. I got BRL 99,000.00 from the Brazilian National Scientific Research and Technological Council. For the next three years, we’ll investigate how cities in Brazil with different sizes and demographic density affect the phenotypic evolution of frogs. I’m really excited and I hope to submit a derived manuscript to PeerJ soon.

You can read more about our PeerJ Sections here.