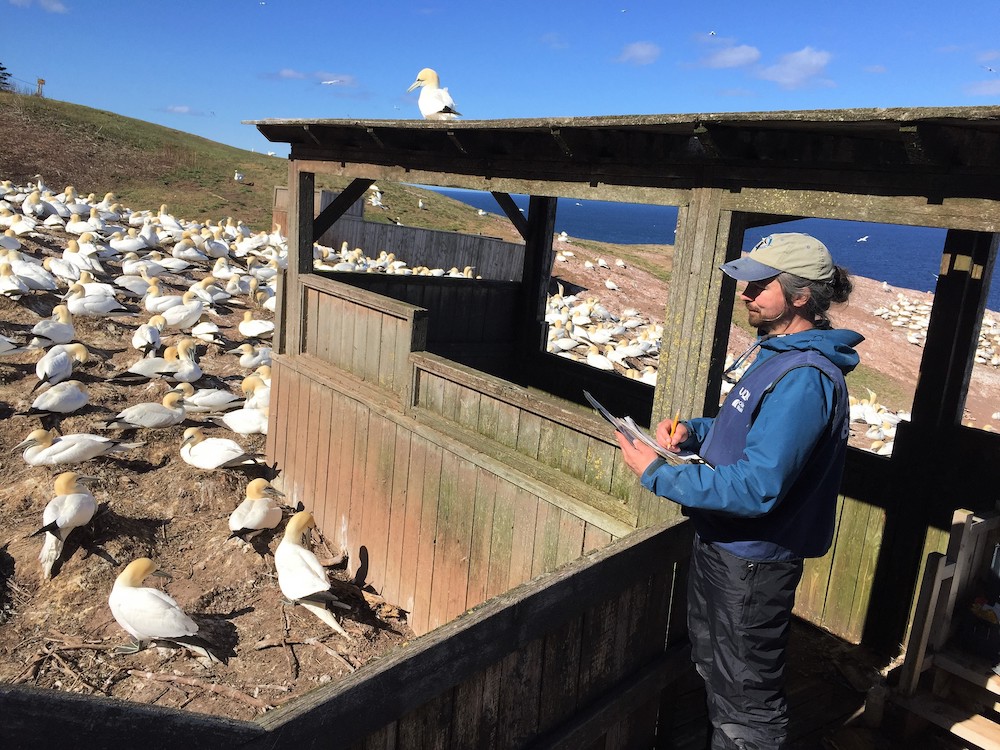 I am a professor-researcher at Cégep de Rimouski since 2007. A “cégep” is a unique educational level in Quebec between high school and university where students follow either a two-year university preparatory program or a three-year technical degree program. The main task of the professors is to teach, but there is a significant and growing percentage of professors who do pedagogical, disciplinary, or applied research. I have been doing disciplinary research in marine ornithology since 2011 and began doctoral studies in 2016, initially on a part-time basis, with Professor Magella Guillemette at the Université du Québec à Rimouski. Passionate about science, the marine environment and birds, my work aims to understand and explain the physiological and behavioral responses of marine avian predators to global changes. I also have an interest in the use of new technologies in both biological research and pedagogy. 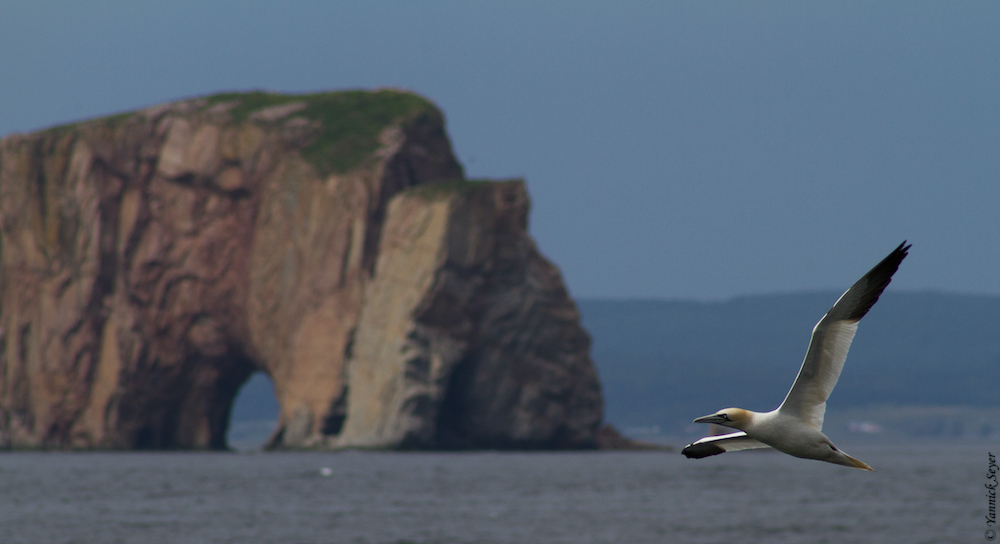 A northern gannet flying in front of the Percé Rock in Gaspésie (Quebec, Canada) © Yannick Seyer

Seabirds exhibit many strategies to cope with environmental changes during the breeding season and to maximize lifetime reproductive output. One such strategy would be to switch partners (to divorce) after reproductive failure to maximize the chance of success with a better-quality partner or to correct for sub-optimal partnerships. In our paper published in PeerJ, we studied divorce at the population and individual level in northern gannets (Morus bassanus) at Bonaventure Island (Québec, Canada) from 2009 to 2019. We tried to answer the following two questions: when do gannets divorce and why do they divorce?

Northern gannet is a long-lived plunge-diving seabird species, nesting in a colony, highly territorial and aggressive at its nest site and has a wide breeding distribution in the North Atlantic. This species is reported as socially monogamous with the suggestion of mate retention for life. Northern gannet exploits cold, nutrient-rich waters, and relies on seasonally abundant fish stocks including Atlantic mackerel, Atlantic herring, capelin, and sand lance. However, in recent decades, the stocks of most of these fish species have been declining and there has been a decrease in the reproductive success of the northern gannet.

We have shown that there is a strong relationship between mackerel abundance and gannet reproductive success, i.e. in years when the mackerel biomass is lower, the number of young fledged per egg laid is also lower. Gannets struggle to find food to feed their chicks, but they do so by increasing the amount of time spent foraging or by changing their diet to prey that is often of lower quality. We have shown that the divorce rate in the colony increased following a year of high reproductive failure. On the other hand, at the individual level, gannets that divorce increase the probability of improving their reproductive success. Our results support the hypothesis that divorce is an adaptive strategy, an example of behavioral adjustment, beneficial for maintaining reproductive success despite difficult feeding conditions in the marine ecosystem. 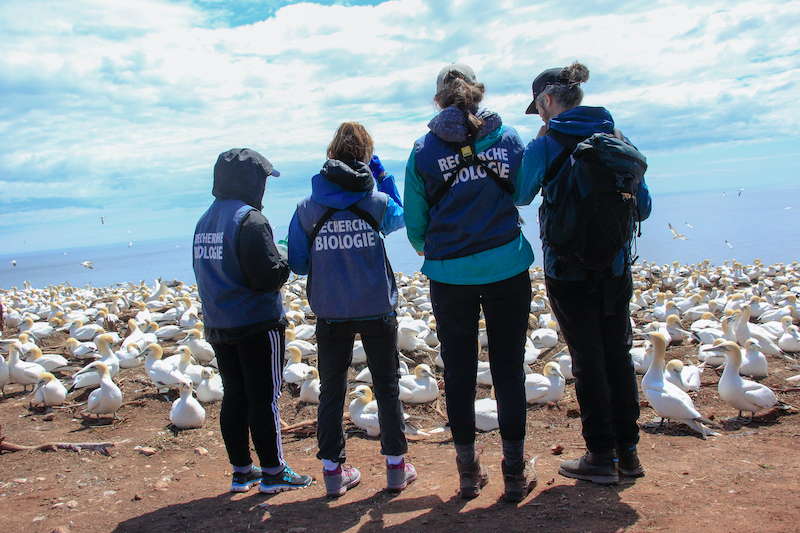 To our knowledge, we have documented for the first time the disruptive effects of prey depletion in a marine ecosystem on the partnership-related reproductive processes of a monogamous population, potentially mediated by higher reproductive costs and physiological stress (we will publish this in a future paper). Considering that the fish stocks consumed by gannets have suffered dramatic declines due to significant and rapid changes in the marine environment and overfishing, divorce may therefore represent an overlooked consequence of global marine change.

I first heard about PeerJ by reading articles that had been published there in my field of study. I liked the content of these articles and I found that the layout of the articles was also pleasant to consult. It was only recently that I realized that it was an open-access journal. I found PeerJ to be innovative on many levels both in terms of submission and article review. I believe that creativity is as necessary for the production of science as it is in its presentation, and PeerJ was in line with my interests and values. 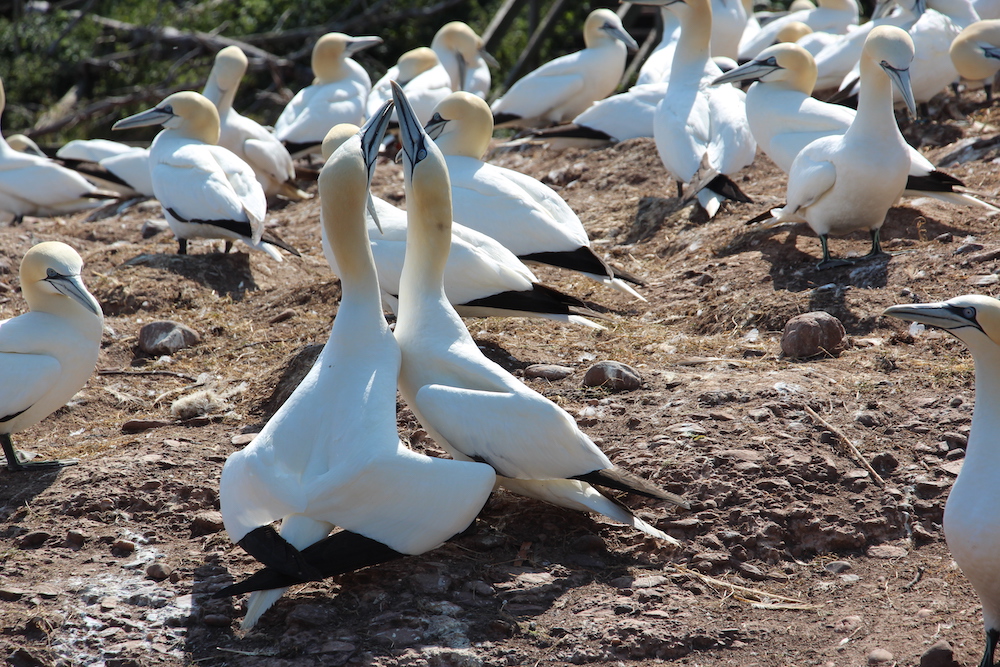 The fact that a PeerJ LaTeX framework was present on the Overleaf platform helped a lot in the submission process. I appreciated the constructive approach of the academic editor and the reviewers. The interaction between the staff and me was always quick and efficient, but courteous.

YES, ABSOLUTELY! Without any hesitation. Here are all the reasons I would recommend PeerJ: