At the end of 2021, PeerJ were delighted to sponsor two awards at the 3rd Palaeontological Virtual Congress (PVC). We recently talked to the winners of these awards, to find out more about them and their research!

If you are organising a conference and would like to offer a PeerJ Award, please email communities@peerj.com

The increasing use of virtual platforms to communicate science encouraged us to create the 1st Palaeontological Virtual Congress (PVC) in December 2018, followed by the second edition in May 2020. The two first editions were a success, so we are glad to present the results of the third edition of the PVC:

To our delight, participation has doubled compared to 2020, but even more importantly, the number of contributions rose significantly. In the 3rd PVC, more than 535 scientists from 56 different countries gathered virtually to watch more than 282 contributions and 3 virtual field trips, a staggering 75% additional content compared to 2020.

Our purpose is to spread, worldwide, the most recent scientific advances in palaeontology in a fast, easy and economical way. The PVC was pioneering in palaeontology, being the first exclusively virtually developed conference in our field. In these challenging times, online platforms have gained great relevance and are key to keep up the drive for science communication among peers and enthusiasts.

Even when online meetings are the norm, our main aim is still the same: to give international projection to the palaeontological research carried out by groups with limited economic resources, as well as to promote the participation of palaeontologists from developing countries around the world. And this is reflected in our low-cost registration fees. 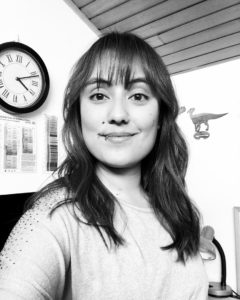 I was very interested in studying paleoecological and paleoclimatological conditions during important extinction periods. I wanted to understand how climate changes affect mammalian rates of origination and extinction, at both local and global scales, especially during the Miocene in South America. Specifically, I wanted to know which groups were affected by local or global climate changes and which were affected by faunistic interchanges.

Can you briefly explain the research you presented at the 3rd Palaeontological Virtual Congress?

I presented a summary of my doctoral research, about the La Venta metatherian fossil assemblage. The La Venta vertebrate fauna (middle Miocene, Colombia) is one of the most diverse for the Neogene of South America. My research contributed to the increase in the number of taxa recognized for this fossil assemblage (increasing the proportion of metatherians) and the knowledge about their anatomy, adaptations, phylogeny, and paleobiology. The results indicated that La Venta was South America’s most diverse Neogene metatherian assemblage. They also confirmed it as an obligatory reference for the study of the Neogene fossil assemblages of tropical America and the Southern Hemisphere as a whole, being crucial for the analysis of Neogene radiations of the group.

This research has been the most comprehensive study on La Venta metatherians and, in general, the metatherian fossil record of Colombian and northern South America. 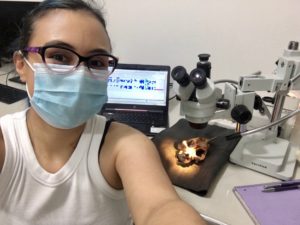 This is my first time participating in this event. It was a good experience. I think the best thing is that the presentations are permanently available. That’s awesome, because you can manage your time and select the presentations you are interested in, to see them when you can, and you don’t miss anything.

Ana García Vázquez Postdoctoral fellow at ArchaeoScience#RO platform of the University of Bucharest. 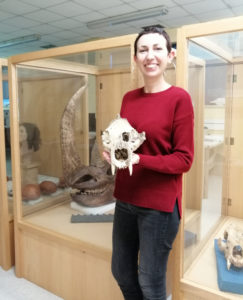 I studied biology in the University of A Coruña, and always had a predilection for learning about the past. When I finished my degree, I started my path towards a PhD, and I specialized in the study of the fossil brown bear (also studying its present-day descendants) in the Institute of Geology of the University of A Coruña (IUX) (where the research that I presented at the 3rd PVC was done). For this, in addition to the classic morphological study, I used molecular paleontology techniques, such as paleodiet by means of stable isotopes, and the study of the biogeography of this species through the mitochondrial DNA of both present-day and fossil specimens. After my PhD, I started to use other techniques such as oxygen stable isotopes for mobility studies, and Zooarchaeology by Mass Spectrometry (ZooMS) for the identification of taxa, analyzing the peptide fingerprint of collagen. I also opened my field of study to archeological sites and I am currently doing a postdoc in the Neolithic site of Gumelnița in Romania, reconstructing the diet and mobility of the population.

What attracted my attention the most about molecular paleontology are the great possibilities it offers to get closer to the past. The results that have been obtained in this field, were unthinkable a few decades ago, and which in some cases contradict previous and well accepted hypotheses. For example, from my research I have been able to deduce that the Iberian Peninsula (at least the north) was not a glacial refugia for the brown bear in Western Europe as was believed, and that both radiocarbon dating and ancient DNA lead to the conclusion that this refugia would have been located somewhere in Atlantic Europe (probably France). I have also been able to observe that the brown bears in the north of the Iberian Peninsula have maintained the same type of diet (with a low percentage of animal matter) from the Upper Pleistocene to nowadays (even when the bears from before the last glacial maximum were replaced for this bears from the atlantic refugia), unlike the brown bear in other parts of Europe were it consumed more animal matter probably to avoid competition with the cave bear.

Can you briefly explain the research you presented at the 3rd Palaeontological Virtual Congress?

Cova dos Santos is a cave located in the NW of the Iberian Peninsula. The bone remains found in this cave are few in number (a total of 50 remains) and fragmented. At first sight, it is not a site that attracts attention, but thanks to a grant from the Spanish Society of paleontology, I was able to study it. We were able to identify domestic animals such as sheep and goats, a cow, a hen or a cat, and wild animals such as a leopard, and brown and cave bears (also there are bear claw marks – bioglyphs – on the walls of the cave), which makes for a very strange mixture. The next thing that was done, was the isotopic analysis of some identified and some unidentified remains, and the latter were subjected to a study of the peptide fingerprint of the collagen to identify the taxa to which they belonged. New taxa were identified, such as deer, horse, wild boar/pig and, to our surprise, a rhinoceros. We then dated some of the identified remains, and thus obtained dates were very diverse: the rhinoceros was about 43,000 years old, the cave bear 35,000, the leopard 26,000 (just at the beginning of the last glacial maximum), the deer 15,000 (the beginning of the Holocene), and the horse from two centuries ago… So, in conclusion, employing molecular paleontology techniques we were able to extract a lot of information from a modest and fragmented bone collection. 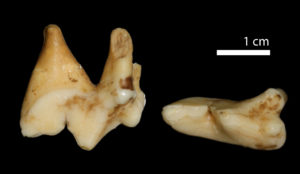 It would be interesting to carry out further ZooMS analysis on other unidentified remains, as well as ancient DNA analysis for the taxa that ZooMS doesn’t allow to differentiate between species of the same genera or family, like for example the rhinoceros, in order to know which species it is, as there are two candidates, the wooly rhinoceros, and the narrow-nosed rhinoceros.

This was the first time I participated in an online congress and the experience was really good. The papers are peer-reviewed by experts, so the quality of the research is assured, as well as having the convenience of being able to watch the presentations from your office or even your living room at home. Although with the COVID-19 pandemic we have become used to many congresses being held online, I think it is important that this type of congress fully online, like the Virtual Palaeontology Congress, continues to exist beyond this pandemic.