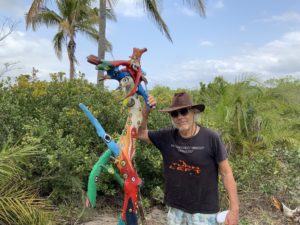 I am a medical entomologist with extensive experience: over 40 years of fieldwork on five Continents (South America, Oceania, Africa, Europe & Indo-China). I specialize in the ecology, control and surveillance of blood-sucking insects, in particular vectors of malaria. Although much of the science that I have been involved with has been esoteric (I am one of the very few entomologists able to do in-depth dissections on mosquitoes and one of the few to have worked on the mating behavior of malaria vectors) I have also been involved in research leading to new control techniques – I was among the first to undertake critical in-depth studies of insecticide treated materials for malaria control – and new surveillance techniques: the Furvela tent-trap remains the best method for the collection of outdoor biting mosquitoes.

What did you discover in your most recent PeerJ article, “Novel sampling methods for monitoring Anopheles arabiensis from Eritrea”? What was significant about your findings?

One of the things we learnt from the work in Adi Boskal is that it is perfectly possible to undertake reasonable research with a minimum of resources over a limited time period with students whose primary aim was to learn the scientific method and field techniques for the collection, dissection and preservation of potential malaria vectors in a resource-strapped country like Eritrea. We were able to undertake a variety of mosquito collection mechanisms, both for indoor resting and outdoor biting mosquitoes, that merited publication in my favorite journal, PeerJ. The dissection work has already been published in PeerJ: ‘We like it wet’: a comparison between dissection techniques for the assessment of parity in Anopheles arabiensis and determination of sac stage in mosquitoes alive or dead on collection.

The work for the principal investigator included an almost daily bus ride (in the project bus) from the study village in the morning to the lab in the nearby town, followed by several hours of dissection, followed by a bus ride, with the students of that night, to the town of Keren, where they had rooms in a nice Eritrean hotel. Eat, shower and gather the other set of students, like an old hen, and take the 40 km journey – along the hairpin, stony roads – back in a rickety bus. The journey was exhausting. On arrival to the field site the schedule was discussed and traps prepared. Traps run all night, with changeovers and back home in the morning. Groundhog Day for 23 nights, with each set of students having alternate nights off. Were it not for the kindness shown me by one of the co-authors, I don’t think I would have survived – a statement repeated by others during the COVID-19 epidemic.

In other years there was nowhere with a sufficiently reliable mosquito population sufficient to undertake experiments. The population at Adi Boskal remained low the following year, making potential follow-up experiments impossible. We finally got permission to work in the malaria-endemic area of Gash Barka, but even there we caught very few insects. (It gave me time to take some photographs!)

One of the findings that might have a potential impact on future research and control is that the illumination of an animal shelter during the day encourages the mosquito to leave in an attempt to find a darker (equals cooler) resting site outdoors. As Mick Gillies once pointed out to me, outdoor resting in these mosquitoes is likely to result in a higher mortality compared to resting indoors. Closed shelters are cooler in the hot season and warmer in the cool season. Before banging a drum about this (it is simple and might be a game changer. It would also be ironic: I once got a grant from the Bill and Melinda Gates Foundation where we were attempting to turn houses into traps – they can check out but they can never leave – whilst here we would advocate the opposite!) it is worth knowing where this might be appropriate and what the negative consequences might be (one would start with a whole lot of thermocouples in a shelter in which shutters could be opened to enable the effect of different illumination levels. Exit trapping at sunset, with occasional resting collection, might help in determining the illumination and temperature levels when the insects leave during the day).

The collection of outdoor biting mosquitoes has traditionally been undertaken by collectors sitting and collecting insects that land on their exposed lower legs. This exposes them to possible transmission of malaria and potentially other diseases, and is no longer recommended by the WHO. Alternatives are needed. Ideally replicate traps are equally efficient. This is never going to be the case when humans themselves are the bait. One such trap is the Suna trap. For agencies like Malaria Control Programs that might invest in these traps, information on their efficiency is important. In Adi Boskal, despite using the appropriate lure,  they did not work. They might work elsewhere but an alternative collection method, that is even more efficient than landing collections, is already available. I, of course, refer to the Furvela Tent trap (also published in PeerJ, ‘The Furvela tent-trap Mk 1.1 for the collection of, outdoor biting mosquitoes’.  PeerJ 2017 doi:10.7717  – It was the 4000th article they published, a brief moment of fame!). It is so easy, takes so little time to set up, and poses no risk to the collectors. It has recently been shown to be the most efficient trap for the collection of outdoor mosquitoes in Kenya so perhaps a head of steam is developing for its use.

The Suna traps which collected the primary vector, Anopheles funestus, and helped reduce transmission on Rusinga  Island, in western Kenya, were located close to houses and so it would also be odour from the house that drew the insects there in the first place.

Can you tell us about some of the work you have done in your career?

I cut my teeth on fieldwork in the Amazon in the late ‘70s. After four years I moved on to Papua New Guinea. The work we did there in the early 1980s with insecticide-impregnated mosquito nets helped the acceptance and establishment of the technique as an appropriate intervention, officially sanctioned by the WHO in 2000. Only took 16 years!!

After a stint in Liverpool at the School of Tropical Medicine I moved to Ifakara, Tanzania, where I was responsible for the entomological component of the Kilombero Malaria Project, including the entomological aspects of the first African malaria vaccine trial. The malaria control agency subsequently adopted the interventions suggested by a later project.

After a period of navel gazing  (i.e. two and a half years without a job!) I went to the West African archipelago of São Tomé and Príncipe as the person responsible for an INCODC project. The malaria control agency subsequently adopted the interventions suggested by the project.

From 2001-2010 I worked for the Danish Bilharziasis Laboratory. For most of this time I lived in the village of Furvela in Mozambique, where I was responsible for the Mozambican-Danish Rural Malaria Initiative (MOZDAN), which examined aspects of the ecology of malaria vectors in Southern Africa. In order to keep the project going I worked for two years in Furvela without pay – the Danish government had overspent its aid budget and so the project would otherwise have been shut down. I also established a malaria elimination project on the peninsula of Linga Linga, (before Bill & Melinda mentioned the word), and was responsible for the SIMA project, Chockwe. I still have a house there that is steadily being eaten by termites! The work I did there was also published by PeerJ.

From 2010-2013 I was responsible for the entomological aspects of the DFID-funded project ‘Tracking Resistance to Artemisinin Collaboration (TRAC) in Cambodia’. We field tested novel methods to reduce outdoor biting of potential malaria vectors. From 2014 -2016 I was the local PI of the Pan African Vector Control Consortium (PAMVERC) responsible for an MRC-funded study in Kagera Region, northern Tanzania. The study testing the efficacy of novel mosquito nets, with and without Indoor Residual Spray (IRS), covered an area of 150 sq kms with a population of 130,000.

In 2016 and 2017 I organized and taught three four-month long courses on the Ecology and Control of Malaria Vectors at the College of Health Sciences in Asmara, Eritrea. These courses are designed to produce a cadre of professionals capable of taking the country to malaria elimination in the future.

In 2008 I received the accolade of being the person most other entomologists wanted to attend the Gates-funded, closed, meeting on ‘Mosquito ecology and control’ in Seattle. My flight was delayed so I missed my moment of glory – I am sure the opinion of my fellow entomologists changed during the meeting!! When, some years ago, I gave a talk at a MIM conference, I was introduced as ‘the most experienced medical entomologist working today’– I had to point out what Oscar Wilde said about experience – it is simply the name we give our mistakes!

A swan-song work shop will be undertaken in Ifakara at the start of the year. This, of course, is where I worked in the early 1990s. Back then I managed to combine work with pleasure by rowing a dugout canoe up and down the Kilombero River, seeing elephants close to the National Park and huge herds of buffalo to the north. We demonstrated the existence of a feral population of Anopheles arabiensis, breeding in what must be considered the ‘ideal habitat’ – water-filled hippo footprints exposed to the sun – whilst watching the huge flocks of pelicans rising on numerous thermals across the valley. The wings are white on top and black underneath, presumably because of the thermal advantages offered. The effect though is that the circling birds flip from white to black, as if they were a pack of cards.

I hope to train students in the methods of dissection that I do. I will leave my microscope to the most promising student. During the workshop I hope to determine the effect of temperature on ovariolar sac contraction. There is evidence that rates will be reduced the longer insects are held before dissection. This affects estimates of one of the two most important entomological numbers in malaria, the duration of the oviposition cycle.

Can you tell us about your experience with PeerJ?

I have always been an advocate of Open Access publishing. PeerJ is my favourite journal. I have been a fan of the subscription method for authors that you promoted when you first started. Indeed, when I published in PeerJ whilst employed in projects at the London School of Hygiene and Tropical Medicine, I tried to persuade my co-authors (all from the School) that this was the thing we should do.  But, with the exception of my co-author on the Eritrean paper Corey LeClair,  they preferred to pay the article processing charges. Scientists are often very conservative, it seems!