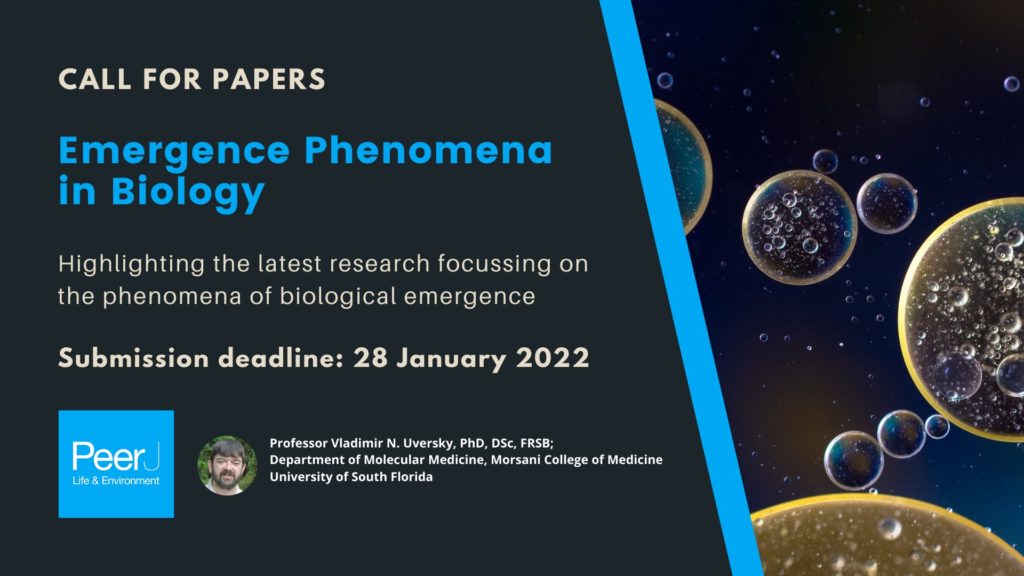 “Emergent behavior is an important but mostly underappreciated feature of any leaving system.”  – Professor Vladimir Uversky, University of South Florida

The phenomena of biological emergence are attracting the attention of researchers with scientific interest ranging from cell biology to physics. This is mainly due to the fact that these phenomena are associated with several important biological processes, such as cellular compartmentalization and formation of various cytoplasmic and nucleoplasmic bodies. These phenomena were mostly ignored until quite recently due to the inability to isolate these bodies from the cell, a primary step in the dominating reductionist approach based on the presumption that understanding of the simple parts of a system is crucial for understanding the system itself. However, the situation is rapidly changing, as it is becoming clear that the phenomena of biological emergence represent a new principle of the intracellular space organization.

Emergence can be seen as an oscillatory behavior associated with the formation of mesoscale patterns of travelling protein waves or as intracellular liquid–liquid phase separation (LLPS) resulting in the formation of the biomolecular condensates (BMCs) and membrane-less organelles (MLOs). These BMCs and MLOs are highly dynamic macromolecular ensembles, which are different in size and shape and are visible under the light microscope. They have different compositions and possess various important biological functions. Since BMCs/MLOs do not have enclosing membranes, their components can directly contact and exchange with the exterior environment. The biogenesis and structural integrity of these condensed liquid droplets, which are formed as a result of the reversible and highly controlled LLPSs, are dependent exclusively on the protein–protein and/or protein–nucleic acid interactions. BMCs/MLOs are characterized by liquid-like behavior, being able to drip, form spherical structures upon fusion, and wet. Typically, these cellular bodies are formed in response to the specific cellular activities or stress. The pathogenesis of various diseases is linked to the distorted biogenesis of MLOs/BMCs. Oscillatory behavior, which is illustrated by the spatiotemporal oscillations of the Min protein system (MinD, MinC, and MinE) that determines the division plane of the rod-shaped Escherichia coli, represents another plane of the emergence phenomenon.

This Special Issue includes research papers and reviews dedicated to the different aspects of the LLPS, BMCs, MLOs, and spatiotemporal oscillation phenomena.

For more information and to submit your abstract, please visit: https://peerj.com/special-issues/98-emergence-phenomena