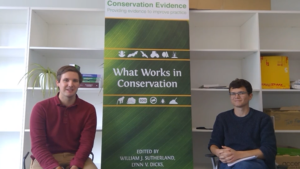 PeerJ spoke to Alec Christie and Thomas White about the recently published article Reducing publication delay to improve the efficiency and impact of conservation science.

Can you tell us a bit about yourselves?

We’re both researchers from the Conservation Evidence project at the University of Cambridge. Alec Christie is a research fellow at Downing College, Cambridge and did his PhD in evidence-based conservation with the group, Tom White is a PhD student working on assessing the cost-effectiveness of conservation interventions. We are joint first authors of this paper, having conceived the idea of assessing publication delays in conservation together.

We wanted to understand how long scientific studies in conservation are typically delayed in the publication process after data has been collected. We used the Conservation Evidence database which, as of December 2020, contained 7,447 studies testing 2,499 actions across several subjects in conservation (e.g., amphibian, bird, or peatland conservation). For these studies we were able to obtain the years the study ended and the year it was published, which enabled us to crudely estimate total publication delays for many studies in different subjects. This allowed us to quantify and compare delays between: 1. different subjects; 2. different literature sources (e.g., peer-reviewed and non-peer-reviewed); 3. Years to see changes over time; 4. species with different IUCN threat statuses. To quantify delays at different stages of the publication process, we also separately processed journal data on the delays of studies published in journals represented in our database, as well as other zoological, ecological, environmental, and conservation journals.

What did you discover and where?

We’ve divided up what we found out about publication delays into several categories.

1. Delays by conservation subject
We found that publication delays for studies testing conservation actions averaged 3.2 years and varied by subject. For example, delays were significantly shorter in Bee Conservation, Sustainable Aquaculture, Management of Captive Animals, Amphibian Conservation, and Control of Freshwater Invasive Species (adjusted mean of 1.4-1.9 years) – although it’s difficult to definitively explain why. It could be that researchers in these subjects submit their papers to more specialist journals (with fewer resubmissions delaying the process or faster journals speeding up the process) or that studies in these fields are inherently faster to write-up.

3. Delays over time
Publication delay has significantly increased by 1.2 years from 1912-2020 – although we showed that this trend became weak and non-significant after the 2000s. So there is no evidence that publication delay is becoming shorter and improving.

4. Delays for different IUCN threat categories
We found no evidence that studies on more threatened species were subject to a shorter delay – actually, the contrary was true for mammals, there were inconsistent patterns for birds, and amphibian species showed no significant differences.

Summary
Our findings suggest that publication delays in conservation can be severe and show no sign of improving, whilst there seems to be no prioritisation to speed up the publication of studies on threatened species. To divide up where the delays occur in the publication process, we concluded that write-up delay probably constituted most of the total delay in studies we analysed (i.e., the time it takes to analyse, write-up and submit the study to the first journal or publication source). Resubmission delay (time taken for peer-review and submissions to at journals that reject the study) and destination journal delay (time taken to peer-review and publish the study at the final publication source) made up similar proportions of the remainder of the delay.

Publication delay in conservation science is extreme. On average it takes 3.2 years to publish the results of a study that tests the effectiveness of interventions. Although we’ve focused on conservation science, similar research in other disciplines shows similar delays.

This means that for mission-driven disciplines, such as conservation, which require urgent action to address the decline of species and habitats, data that could be useful for guiding action is unavailable to the wider community for a long period of time. In conservation, a lot can happen in 3 years – think about how much wind infrastructure has increased in the last 3 years which has impacts on bird and bat populations, or how quickly the population of a species can decline due to new threatening processes. There is an urgent need for data that can help guide action to address these threats.

To give an example. The ploughshare tortoise, an endemic species to Madagascar and one of the rarest reptiles on the planet, has been subject of much conservation action led by the Durrell Wildlife Conservation Trust. They have been pioneering ex-situ breeding and releases of individuals to the wild to supplement the declining global population, alongside a wider conservation program. However, despite initial successes the species suffered from a drastic uptick in illegal hunting due to international demand for their shells, causing the population to decline from 950 in 2004 to 507 in 2013. In situations such as this there is a rapid need for evidence on the effectiveness of possible actions to reduce threats. Improving the speed at which scientific data is published offers large opportunities for improving the impact and efficiency of conservation science as a discipline.

Ironically, although the write up and publication process for this paper has been relatively smooth compared to other papers we have been involved in, it still suffered from delays at various stages in the publication process. For example, we originally submitted to a scheme called Peerage of Science – an innovative new scheme aimed at tackling some of the problems with the publication process, by making reviews open and accessible to several journals signed up the scheme. However, we were notified after a month of waiting that unfortunately this scheme has been shut down due to lack of uptake by the scientific community.

Many researchers will have horror stories of difficulties in write-up, submission and peer-review that have hindered, or even, prevented their research being published and made available to a wider audience.

After looking at the extent of this problem in conservation science, we explore the different components and causes of this delay and identify possible strategies that could help practitioners, researchers, funders and publishers reduce these delays in future. These strategies could help shift the current system to reduce publication delays, and ultimately lead to benefits in conservation science, and potentially other mission driven scientific disciplines.

We saw that PeerJ was linked to the pre-print server (BioRxiv) that we used to initially publish a pre-print of our work, so that we could directly transfer our manuscript to the journal without having to fill in a separate submission form. We also saw that PeerJ claimed it was committed to speeding up and streamlining the publication process, which clearly fitted with the rationale and subject of our paper.

We found the process to be relatively rapid and easy to navigate. The reviews were detailed and constructive, which helped improve the paper a great deal. We were a little delayed by funding issues with how our institution pays for open access charges, but this was sorted out relatively quickly and we received proofs quickly.

We would just say that there are many ways we can tackle the challenging issue of publication delay, which we outline in a table in our paper. Some of the options we outline need to be carefully thought through so that we don’t inadvertently increase publication delays or compromise the rigour and integrity of the peer-review process which is clearly a cornerstone of scientific publishing. However, we do believe that in some cases we need to radically rethink how we more efficiently write-up and publish studies. One option is to make resubmission a less time-consuming process by standardising journals formatting and styles across journals (e.g., referencing, sections, figures and tables), as well as making transfers between journals easier. Check out the table in the paper for many more potential ideas.