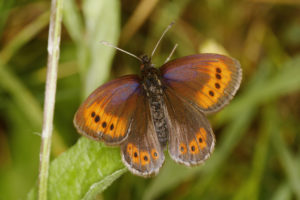 Can you tell us a bit about yourself and your co-authors?

We are a team of researchers with a shared passion for butterflies and mountains. The long term monitoring of mountain butterflies is our hobby. Over the past10 years, we have introduced dozens of volunteers including our children to the picturesque mountains of the Czech Republic and extended their knowledge about mountain ecosystems.

Martin Konvicka is a leading Czech ecologist, whose work was seminal for promoting butterfly conservation biology in our country. I am interested in insect ecophysiology, I currently study the effect of climate changes on insect evolution. Jan Klecka works mostly on interspecific interactions such as pollination and predation but likes to join me for butterfly observations whenever he can (he is also my husband). Jana Liparova, Vit Slezak, Tomas Kuras and Dita Horazna are researches working on insect conservation.

We aimed to answer the question, how does variation in yearly weather, as an important component of overall climate, drive the abundances and population dynamics of mountain butterflies? We used more than a decade of detailed transect counts of two high mountain Erebia ringlets and explored the effects of weather experienced by young larvae in the autumn, overwintering larvae, old larvae in the spring, and adults in the summer.

What did you discover and where? What was significant about your findings? 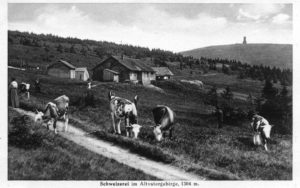 As expected, abundance of the adult butterflies is driven by weather conditions they experienced as larvae but in rather counter-intuitive ways. Low winter precipitation, which means winters with little snow cover, are harmful and decrease subsequent adult population abundance. Conversely, warmer autumns and warmer and drier springs during the active larval phase increase adult abundances and lead to earlier onset and extended duration of the flight period.

As the temperatures have been increasing in the mountains, the adult populations seem to be stable, or even increasing, suggesting that until now, the positive effects of warm autumns and springs balance the negative effects of relatively warm and snowless winters. There seems to be a delicate balance between the two aspects, which warns us against making simplistic predictions regarding climate change effects on alpine insects.

It is encouraging that both collaborating nature conservation institutions, Jeseniky PLA and Krkonose NP, are applying scientific knowledge in practical management of the habitats, such as trying to slow down woody plants encroachment of the (sub)alpine zone. 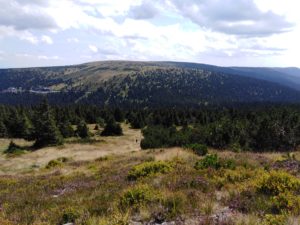 Given that all the authors, plus dozens of volunteers, walked the transects for six or eight weeks annually for over a decade, the anecdotes are innumerable, and none of us remembers all of them. They include relations with other visitors to the mountains, long evenings in mountain chalets, encountering wildlife of all sorts, and even finding a heavily corroded unexploded artillery shell beneath dwarf pine shrubs, a dangerous leftover from a troop training back in 1920s. But perhaps the most telling is the very beginning of the transect walks in 1996. In that season, two of us (Martin Konvicka and Tomas Kuras), plus our friend Jiri Benes, were collecting data on diurnal activity of the butterflies, a work which required early wakeups to arrive to a study site well before 8 a.m. Tomas is an owl regarding his sleeping habit (he is also quite good in studying moths!), and he simply refused to comply. Instead, he suggested that he would sleep a bit longer, until a full butterfly activity, “walk a transect along the ridge, so that we would establish something long-term”, and join us later. We did not see much use in doing this then – but this way, the first transect counts were done. Sometimes it pays to sleep a bit longer.

The population dynamics of butterflies are affected by the ongoing climate change and that the potential negative consequences leading to the extinction of local species will be more visible in mountain ranges with a narrow band of the alpine zone. These mountains have a smaller area of alpine habitats and lower heterogeneity compared to large and higher mountain ranges such as the nearby European Alps.

I heard about PeerJ from my colleagues and I was persuaded by their positive experience with the publishing process together with the lower cost of publishing in PeerJ compared to other major open-access journals.