Advances in Computational Learning for Robotics features selected of papers presented at the 8th International Conference on Robot Intelligence Technology and Applications (RiTA 2020).

This Conference Collection, published in PeerJ Computer Science, is concerned with an important area that has recently attracted the attention of both Robotics and Artificial Intelligence researchers: developing intelligent robotic systems that are capable of making decisions and acting autonomously in real and unpredictable environments, to accomplish tasks and assist humans across various domains within society.

We developed this special issue around the theme of Computational Learning to highlight the critical importance of this topic for ongoing progress in robotics and artificial intelligence.

At launch, this Conference Collection is formed of eight published articles that have examined this issue from various perspectives, such as transfer learning pipelines for skateboarding skills, a novel interactive system for service humanoid robots, musculoskeletal modeling and humanoid control, an algorithm for training AI soccer robots, a visual-attention-based rapid and efficient lightweight CNN for object sorting, an improved Kalman filter for quadrotor localization, a precise localization method for wireless power transfer to electric vehicles, and active triggering control of pneumatic rehabilitation gloves. Additional manuscripts which are still under consideration at PeerJ Computer Science will continue to be published into this collection once accepted, so remember to regularly check back regularly for more research on this topic.

We hope the robotics and artificial intelligence communities will find this special issue to be an informative and useful collection of articles.

We would like to thank the PeerJ Computer Science editorial board and a long list of anonymous reviewers for their thoughtful suggestions and constructive criticisms. The contributions of the individual articles and of the Conference Collection in its entirety are stronger thanks to their hard work.

Jun Yu (author): Aging and physical impairments have increased the demand for limb rehabilitation training. Despite human gait being very complex, and there being multiple differences between individuals, most of the existing rehabilitation training equipment uses a simulated gait which can lead to the coordination between the training equipment and the patient being poor. This paper proposes a musculoskeletal modeling and motion process analysis method – based on real human gait data – and applies the results to the design of a lower extremity exoskeleton robot used for rehabilitation training. The method improves the gait fidelity of a preset training trajectory used during the rehabilitation process, helping to realize human-like control of the exoskeleton robot, and making an important contribution to the comfortable rehabilitation of patients with limb dysfunction.

See a short video compiled by the researchers below:

SeedSortNet: a rapid and highly efficient lightweight CNN based on visual attention for seed sorting

In agriculture, the purity of a batch of seeds directly affects the quality of subsequent breeding and processing efforts. For example, in the process of seed harvest and storage, impurities or hybrids may be mixed in with the normal seed, resulting in economic losses.

Chunlei Li and colleagues utilise machine vision to create an automatic sorting method for seeds. They present “SeedSortNet”, a convolutional neural network (CNN) which is rapid, highly efficient, and lightweight.

The global electric vehicle (EV) market is growing rapidly, however there are still major concerns regarding vehicle range and battery charging infrastructure. To compensate for this problem, a wireless power transfer (WPT) system that can easily charge EVs in parking lot spaces has been previously proposed. When WPT systems are installed in parking lots, parked cars can easily be re-charged without the need for a separate charging station. The WPT consists of power-transmitting coils on the parking lot floor and power-receiving coils for the car. However, for successful charging, the two sets of coils must be precisely aligned to centimeter-level accuracy.

The classification of skateboarding tricks via transfer learning pipelines

Anwar P.P. Abdul Majeed​ (Author): Owing to the advancement of computational technology, primarily the use of machine learning and deep learning techniques, a new dimension in evaluating sporting performance has opened. This work presents the use of different transfer learning models coupled with a conventional machine learning model, i.e. Support Vector Machine (SVM) in replacing the fully connected layers of a typical convolutional neural network architecture in classifying typical skateboarding tricks based on the input image transformed from data collected via inertial measurement units. Now that skateboarding has made its Olympics debut in the Tokyo 2020 Summer Games, the proposed technique could facilitate judges, coaches, and the athletes themselves in identifying the successful execution of tricks. 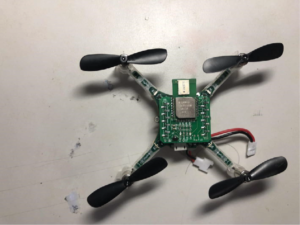 Shuhui Bi and colleagues investigate accurately positioning a quadrotor drone when indoors. Ordinarily, it is possible to use an ultra wide band (UWB) signal and data from the inertial navigation system (INS) for positioning.

In this paper however, the authors detail a newly created neural network-assisted Kalman filter to provide accurate location information even when the UWB signal is lost. 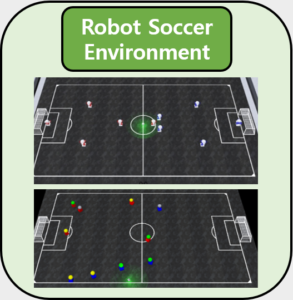 Despite recent breakthrough results in the field of deep reinforcement learning (DRL), deep learning in multi-agent environments that require both cooperation and competition is still challenging. In this paper, Kim and colleagues propose a two-stage training method to provide an optimal policy and maximize the cooperative behavior among heterogeneous agents. They then test this method using a cooperative-competitive Artificial Intelligence (AI) 5-a-side robot soccer game. 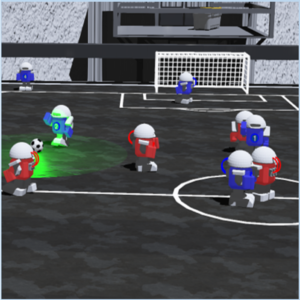 Disorders that impact on hand movement can leave those affected unable to complete various actions in daily life due to a lack of muscle strength and fine motor control of their fingers. Portable and inexpensive hand rehabilitation robots have become a practical rehabilitation device for patients with hand dysfunction.

Presented here, Yongfei Feng and colleagues have created a pneumatic rehabilitation glove with an active trigger control system based on surface electromyography (sEMG) signals. This glove can trigger hand movements based on the patient’s hand movement trend, which may increase the efficiency of patient rehabilitation and their enthusiasm for the training. 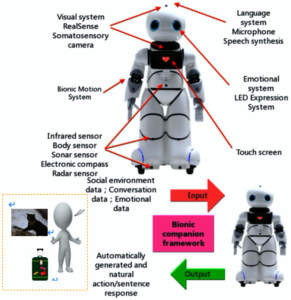 Humanoid service robotics are increasingly being investigated in the field of speech interaction. Currently, the quality of human-robot interaction is not well adapted to more complex environments. For example, humanoid service robots generally lack the ability to accurately recognize human intentions and understand social scenarios.

In the current study, Jiaji Yang et al. Developed a novel interactive system for service robots based on a “bionic-companionship” framework. Their results show that this framework can help the robot to effectively respond to changes in the interactive environment, for example giving different responses to the same character in different scenes.