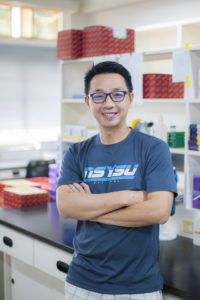 Hi, I am Dr. Shang Yin Vanson Liu, currently an associate professor at the Department of Marine Biotechnology and Resources, National Sun Yat-sen University. I am a molecular ecologist and have an interest in marine biodiversity and the evolutionary processes of reef organisms.

Well, this study is an international collaboration of marine biologists and students from Taiwan, the United States, Sweden and Indonesia funded by NSC (National Science Council, US) and MOST (Ministry of Science and Technology, Taiwan) who were interested in understanding the role that Dongsha Atoll plays in connecting the coral reefs of the South China Sea (SCS). Dongsha Atoll, located 340 km southeast of Hong Kong and 850 km southwest of Taipei, with an area of about 600 km2, is the largest and oldest atoll in the South China Sea. 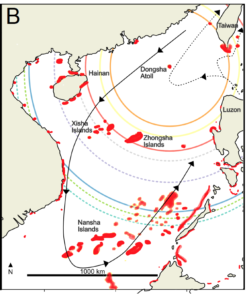 In this study, by comparing DNA sequences obtained from 9 reef species collected at Dongsha atoll with sequences from nearby populations in a database compiled by DIPnet, we found that species with larvae that spend a relatively short duration in the plankton (< 40 days) tend to rely on Dongsha as a critical stepping-st 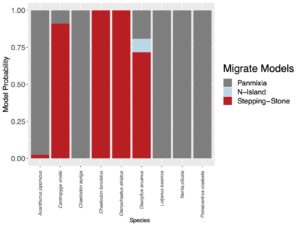 one that connects SCS reefs which indicate its’ importance in term of marine connectivity in the SCS.

The data collecting of this study was done by a group of students from California State University, Monterey Bay and National Sun Yat-sen University under the supervision of Dr. Eric Crandall and I. It was fun to see how this joint project impacts their career and with interesting findings and fruitful results. The field trip led by scientists from three nations in 2017 to the Dongsha atoll was also amazing, Dongsha Atoll Research Station (DARS) is equipped with well-established facilities and equipment that we need for sampling with SCUBA (https://dongsha-mr.nsysu.edu.tw/) around the atoll and the diversity and coral coverage was stunning. 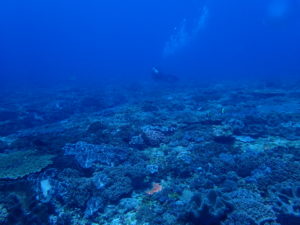 This multispecies study provides the most comprehensive examination of the role of Dongsha Atoll in marine connectivity in the South China Sea to date. Combining new and existing population genetic data for nine coral reef species in the region with a graph theoretical analysis, this study provides evidence that Dongsha Atoll is an important hub for sustaining connectivity for the majority of coral-reef species in the region.

I have 4 papers published in PeerJ including this study, and definitely will submit again since the review process is transparent and fair under the handling editors in the field of aquatic biology.