PeerJ are excited to announce the launch of our most recent Conference Collection, collating research presented at the 5th World Conference on Marine Biodiversity (WCMB), which took place in 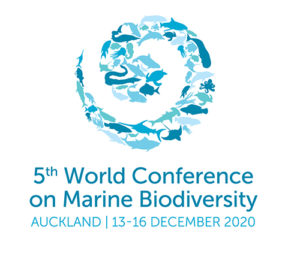 December 2020 and was held virtually by the University of Auckland, New Zealand.

The Collection can be found at https://peerj.com/collections/80-wcmb-2020.

The WCMB series first started in 2008, and has become a major focal assembly for sharing research outcomes, management and policy issues, as well as discussions on the role of biodiversity in sustaining ocean ecosystems. This meeting brings together scientists, practitioners, and policy makers to discuss and advance our understanding of the importance and current state of biodiversity in the marine environment.

This 5th edition saw delegates from 45 countries attend the 3-day online conference, and included early-career researcher (ECR) panel discussions on navigating careers as ECRs and, more specifically, as female ECRs in marine science. Additionally, PeerJ presented four awards – each with a prize of a free publication (subject to peer review) – for the best ECR presentations and posters across the conference.

The 5th WCMB Conference Collection launches initially with four articles, although more will be added to the collection once published so remember to check back regularly!

PeerJ recently talked to the authors and handling editors (where available) for each of these articles included in the initial collection launch. 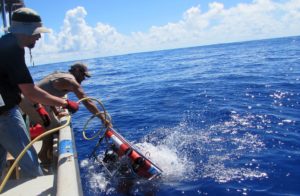 Javier Sellanes (Author): Rapa Nui (Easter Island) is a remote island, located at the westernmost end of a large chain of seamounts comprising the Salas y Gómez ridge. Rapa Nui is considered the easternmost apex of the so called “Polynesian triangle” and is recognized for the high overall endemism levels of its coastal marine fishes and invertebrate taxa. However, this unique marine biodiversity is currently threatened by several anthropogenic factors such as coastal erosion, terrestrial runoff, mass tourism, over-fishing, and pollution. Exploration by the Universidad Católica del Norte Centre of Ecology and Sustainable Management of Oceanic Islands (ESMOI), and NGO OCEANA have revealed a wealth of hidden diversity in the mesophotic and deeper habitats (~40 to 300 m depth) surrounding Rapa Nui. However, an unexpected threat has also been noticed, where extensive fields of filamentous cyanobacteria-like mats covered sandy substrates and dead corals on mesophotic reefs (mainly composed by Leptoseris spp.). These mats are associated with high mortality of corals occurring between 70 and 95 m depth off Hanga Roa, the inhabited area of the island on the western side. Healthy Leptoseris reefs were documented on the northern and southeastern sides of the island, which are also the least populated. Our findings give a warning signal and we call for more research aimed at protecting these unique habitats. 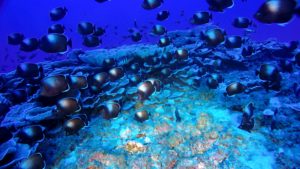 Xavier Pochon (Academic Editor): This study by Javier Sellanes and colleagues investigated mesophotic and deeper habitats around the inhabited portion of Rapa Nui using a remotely operated vehicle. Using opportunistic video observations, they witnessed extensive fields of filamentous cyanobacteria-like mats covering sandy substrates and mostly dead mesophotic coral reefs. Increased coral mortality was observed at depth between 70 and 95 m in this area and contrasted with less populated areas where Leptoseris spp. communities were healthy. Preliminary morphological analysis of these mats suggested they belonged to at least four filamentous taxa, including two cyanobacteria (Lyngbya sp. and Pseudoanabaena sp.), one brown alga (Ectocarpus sp.) and one green alga (Cladophora sp.). This study revealed that an ongoing eutrophication process is occurring in Easter Island, and contributes to a better understanding of the ecological changes occurring in this understudied region of the world.

Biogeography, diversity and environmental relationships of shelf and deep-sea benthic Amphipoda around Iceland 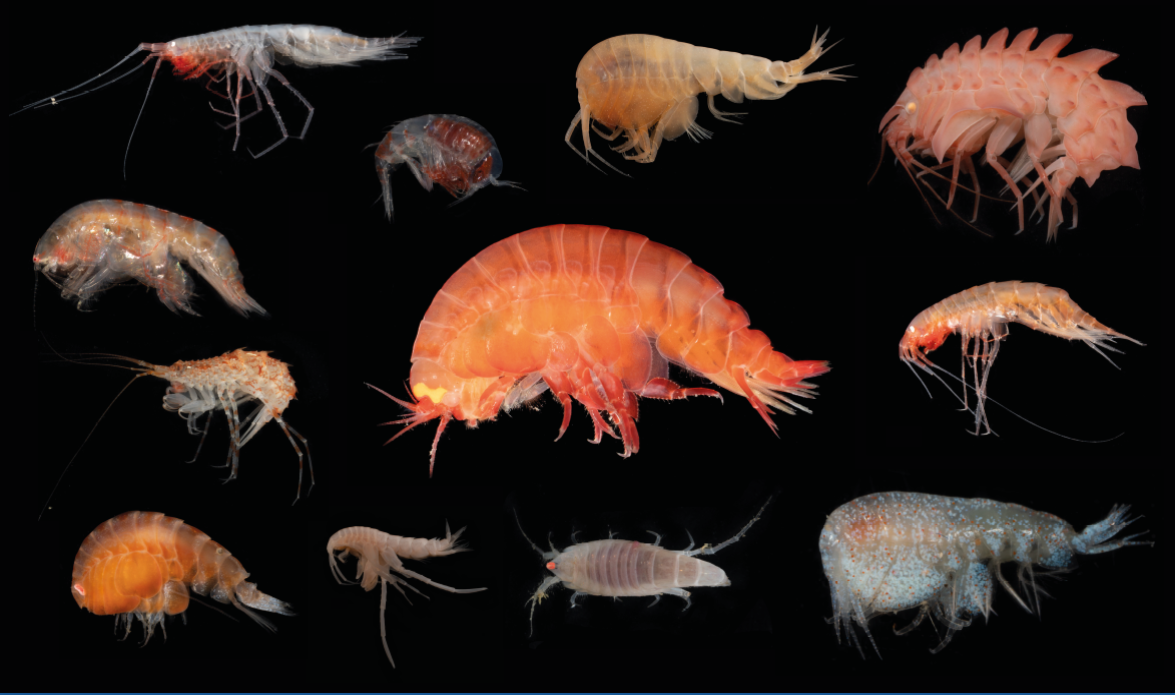 Anne-Nina Lörz (Author): Amphipod crustaceans are key players in the North Atlantic ecosystem. A huge dataset of Amphipoda occurring on the seabed around Iceland was analysed by Anne-Nina Lörz and co-workers. The distribution of more than 71,108 individuals belonging to 355 species collected at 532 localities was compared in the context of eight environmental parameters: depth, pH, phytobiomass, velocity, dissolved oxygen, dissolved iron, salinity, and seawater temperature. Based on these faunistic and environmental data, four biogeographical clusters could be identified: A Deep-North, Deep-South, a Coastal cluster as well as one restricted to the Greenland-Iceland-Faroe Ridge. Diversity and distribution patterns were discussed with regard to the influence of historical (e.g. oceanography, climatic conditions) and contemporary environmental factors. In particular, the importance of sea water temperature and salinity on the distribution of this group of crustaceans could be demonstrated, and with it the consideration that this could shift considerably as a result of climatic changes in the region.

Mark Costello (Academic Editor): This study found a remarkable 355 species of amphipod crustaceans distributed in distinct assemblages on the seabed of (a) the ridge connecting Greenland Iceland and Faeroes, and (b) north and (c) south of this ridge, and (d) near the coast. Because the region is warming faster than the global average, these data provide a valuable baseline to track how global warming will alter marine biodiversity. Contrary to what some have hypothesised, but in keeping with evidence from other studies, the number of species declined rapidly with depth. 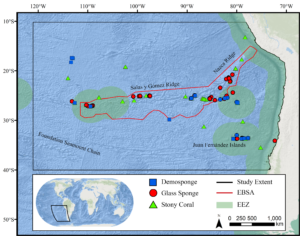 Samuel Georgian (Author): In the remote waters off the coasts of South America lie a pair of seamount chains known as the Salas y Gómez and Nazca ridges. The ridges contain over 110 seamounts and stretch more than 1,800 miles, with the majority (73%) occurring in waters that are outside of any national jurisdiction, known as the high seas. These seamount chains support an exceptionally rich diversity of benthic and pelagic marine life, with the highest known rate (>40%) of marine endemism. Due to their remoteness the ridges are currently considered to be relatively pristine, but are threatened by a myriad of human disturbances including overfishing, pollution, deep-sea mining, and climate change.

In our study, we built species distribution models for three key foundation taxa (demosponges, glass sponges, and stony corals) to predict their distribution across the unexplored sections of the ridges. We found that seamounts and other large seafloor features throughout the region typically contained highly suitable habitat for all three taxa. This suggests that widespread, currently undiscovered benthic ecosystems likely occur along both ridges, necessitating a regional conservation approach. We urge that this incredible biodiversity hotspot be protected from exploitation using the best available conservation measures before it is too late. 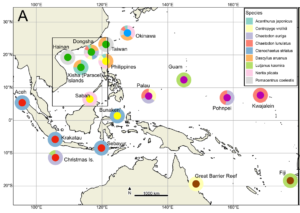 Shang Yin Vanson Liu (Author): This study, under the auspices of the Diversity of the Indo-Pacific Network (DIPnet), brought together an international collaboration of marine biologists and students who were interested in understanding the role that Dongsha Atoll plays in connecting the coral reefs of the South China Sea (SCS). SCUBA divers took tissue samples from nine coral reef species from the atoll, which is currently protected from fishing activity as a national park by the government of Taiwan. DNA from these samples were sequenced and compared to DNA sequences from nearby populations. Species with larvae that spend a relatively short duration in the plankton (< 40 days) were found to often rely on Dongsha as a critical stepping-stone that connects SCS reefs. A separate analysis based on maximum estimated dispersal distances of each species found that Dongsha was ranked in the top 15 most important reefs for ensuring long-term stability of SCS reef populations for all but one of the nine species. DIPnet is focused on increasing global capacity to study and protect marine biodiversity of the Indo-Pacific, the world’s largest marine biogeographic region.

Read our full interview with Dr. Liu about this article!

Nick Jeffery (Academic Editor): Liu et al. demonstrate the importance of the Dongsha Atoll, a marine national park, as a region of importance for dispersal and connectivity for nine marine species in the South China Sea. While connectivity has been suggested to be a key factor in designing Marine Protected Area networks, it has rarely been quantified and operationalized over a broad geographic scale. Using several mitochondrial gene regions, Liu et al. reveal that while some species show high connectivity across the South China Sea, others exhibit a stepping-stone model of connectivity, where populations are more genetically divergent the farther apart they are. This study examines an impressive number of species in a demographic model-testing framework, which demonstrates the importance of Dongsha Atoll as a conservation area, and reinforces the need to assess connectivity when designing new Marine Protected Areas.

Interested in organising a Collection for your next conference? Email us at communties@peerj.com