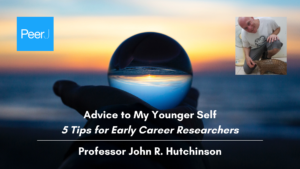 We invited Professor John R. Hutchinson, Professor of Evolutionary Biomechanics at The Royal Veterinary College to share his thoughts.

This is an ongoing blog series so keep an eye on the PeerJ blog to see more advice from our Editorial and Advisory Board Members. If you would like to contribute to the series please do get in touch: communities@peerj.com

Advice to My Younger Self – Professor John R. Hutchinson of The Royal Veterinary College, UK 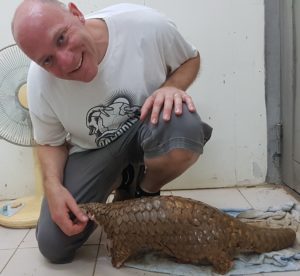 Professor Hutchinson is an American biologist who found a new home in the UK as a dual citizen. He gained a BS degree in Zoology at the University of Wisconsin in 1993, then received a PhD in Integrative Biology at the University of California in 2001, and rounded out his training with a two-year National Science Foundation bioinformatics Postdoctoral Fellowship at the Biomechanical Engineering Division of Stanford University. He started at the Royal Veterinary College in 2003 (now in the Department of Comparative Biomedical Sciences), and has been a full Professor of Evolutionary Biomechanics since 2011. Professor Hutchinson‘s research straddles the fields of evolutionary biology and biomechanics, with an emphasis on how very large animals stand and move and how locomotion evolved in different groups of land vertebrates. For more about his team’s current research see here: https://dawndinos.com/

1. Your Happiness Matters: I was pretty happy as an early career scientist, but didn’t think deeply about what truly mattered—it typically was the concrete achievements “expected” in science I was after: that paper, that funding, that presentation. I implicitly assumed these would bring me the happiness; the joy and purpose; that I needed in life. To a degree they did, but along the way I lost sight of some other things in life that brought me happiness, and I didn’t cultivate them or really think about the big picture of happiness. I recommend that early career scientists ruminate over and list things in all of life that matter most to them, and think strategically about a balanced pursuit of them—relationships, recreation, a well-rounded self, and more.

2. Build Your Evolving Identity: I tried too hard to fit into others’ expectations and conventional boxes of what a scientist should be. Like so many scientists do, I compared myself with others and felt the infamous “imposter syndrome”, that I didn’t measure up and didn’t belong. I learned to do one thing that worked for me, however: trying to compete not with them (even though at times it felt very competitive) and more to compete with myself, to build a better me, drawing inspiration from others and striving to make those parts of myself if I could, such as skills and knowledge. I wish I’d known that earlier, and focused more on making myself who I wanted to be (a better person and scientist), allowing that vision to change with time and allowing myself to be more different. It took me quite a while, maybe 10 years, to get to that point of knowing my identity as a scientist.

3. You Can’t Control Everything: Uncertainty is brutal to deal with, and life taught me cruel lessons about this as a maturing scientist. It is hard letting go of things you cannot control—not just the vicissitudes of peer review or the job market, but even more important things like health. I had several chronic health crises as a young scientist, leaving me disabled (epilepsy) later in life. Even though I had good career success along the way, these crises left me staggering and still are a massive struggle. An early career scientist should reflect carefully on what they are truly able to control in life and focus efforts there, but it’s not easy. You may be able to control what help you get—“self-made” success is rather mythical and an unhealthy goal; don’t be ashamed to ask others for help.

4. Treasure Now: Related to the above point, scientists often get caught up in chasing the future—that degree, that postdoc, that tenure-track job or whatever goal; and forget the moment. There are great moments to savour along the way. It’s important to pause and think about them, and they can make you happier. Look around, ask what’s happening now that you’re thankful for, and appreciate it; even keep a daily written list of those pleasant events. I realize now that I let some great times slip in the mad rush of my early career. It’s not just about work-life balance, but about whole-life awareness and reflection. I couldn’t have known the tough challenges life would throw my way later, and wish I’d lived more in the moment through some of my past, which I now see as much easier and less complex.

5. You Will Fail Sometimes: But it might be OK. In science we talk a lot about how rejection is something one has to get used to, and that is true, and it still hurts too, and we may move on from it. I did not pass my PhD qualifying exams the first time, which was not uncommon, but it felt like a bitter defeat in the moment. That feeling changed with time and reflection. I initially was angry but learned later, after passing the second time, that I truly wasn’t ready to pass on that first try, and I became a much better scientist through the process thanks to strong mentoring and my own drive. Before then, I’d led a fairly privileged life in which I didn’t have much real failure; not an amazing student but not one that failed much at things I tried, either. Since then, I’ve had plenty of failures. I acknowledge these failures, say to myself “I failed and that’s OK”, and try to learn lessons from them; that the point may not be to “win” but to grow. A “failed” job interview might still teach you how to do better next time; ask how you might improve your performance. The sting of failure isn’t gone by any means, but I feel stronger acknowledging that I can accept failure.