“Progressive Palaeontology (ProgPal) is an annual conference for postgraduate research students who wish to present the results of their work amongst other early career researchers. This years meeting – ProgPal2021 – was the largest yet, with nearly 250 student attendees from across the globe. Accessibility was a top priority, meaning that all content was available for streaming at the delegate’s pace, and all talks included closed captions. The asynchronous aspect of the conference permitted attendees from different parts of the world, and various time zones, to interact with the content and fellow attendees.

Posters and talks covered a wide range of Palaeontology topics, from microfossils, palaeoclimatology and palaeobotany, to palaeopathology, biomechanics, and mass extinction events. Attendees were highly interactive through the conference’s Discord server channels, asking each other questions about their work and presentations, as well as sharing photos of their animal and plant pets! Several technical workshops allowed participants to come away with a wealth of new skills, and two virtual social events were well-received by all participants who wanted to relax at the end of the conference day.

The organisers and attendees of ProgPal21 are very grateful to PeerJ for sponsoring the awards for Best Lightning Talk and Best Full Talk at this year’s event.” 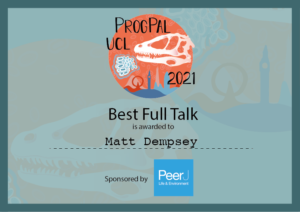 My research interests centre on the anatomy, biomechanics and life appearance of extinct animals, particularly dinosaurs. Growing up I was definitely “the dinosaur kid” among my peers, and that seems to have fuelled what so far seems to be a lifelong interest. If I’m not researching dinosaurs, then I’m probably drawing them, as illustration is also a hobby of mine.

You won the PeerJ prize for Best Full Talk at ProgPal 2021 – can you briefly explain the research you presented at the meeting?

At ProgPal 2021 I presented my ongoing work on one of the chapters of my PhD, which involves the investigation of forelimb muscle mechanics in ornithischian dinosaurs. Ornithischian dinosaurs were ancestrally bipedal, but experienced at least three convergent transitions to quadrupedal gait, in the armoured thyreophoran dinosaurs (e.g. Stegosaurus), the ornithopods (e.g. Edmontosaurus), and the horned ceratopsians (e.g. Triceratops). Secondary quadrupedality is something that is only seen in dinosaurs and possibly also a handful of their closest relatives, so the biomechanical changes associated with such a transition are of particular interest. The research I’m currently working on involves measuring the leverages of forelimb muscles by creating articulated computer models from fossil scans. This will allow us to quantify the biomechanical changes in the major ornithischian groups, each of which may have developed distinct solutions to quadrupedal locomotion as a result of disparate changes to their shoulder and forelimb anatomy. 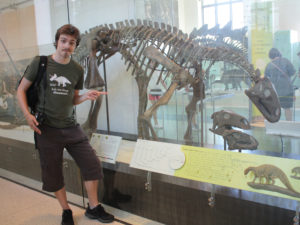 One of my main interests outside of of palaeontology is the technical side of filmmaking, particularly the application of 3D computer graphics and simulation technology that has become an ever more important part of the process in the last few decades. I have prior experience in creating 3D digital artwork and animation, and upon starting my scientific journey I was fascinated by how much of the technology overlaps with current methods used to generate detailed models and simulations for research purposes. I think there’s something quite compelling about using 3D digital techniques to reconstruct and re-animate fossil animals.

Given the current difficult situation we’re all going through, being able to virtually present my research and meaningfully interact with my peers from all around the world has been great. Previous ProgPal conferences that were held in person always had a friendly and welcoming vibe, and this has stayed the case for the virtual meetings. I’m very grateful to the UCL team for making this year’s conference possible. While I do also very much enjoy presenting in-person and getting that live interaction experience, the pre-recorded format of recent virtual conference talks has given me an opportunity to push certain visual elements of my presentations in directions that may not have been possible at a live event, which has been interesting to explore.

The more taxa that can be reconstructed, the more interesting patterns start to emerge. Some of the large ornithischian dinosaurs are doing really interesting things anatomically. On the one hand we have hadrosaurs, which almost look like they’re walking around on stilts, and on the other hand we have some of the larger armoured and horned dinosaurs, which are extremely stocky and built like living tanks. While there’s a vast array of ornithischian forelimb material for me to get stuck into in the NHM collections, there are other fossils stored elsewhere in the world that I’m eager to work on. Because of this, I’ve been especially grateful to colleagues overseas who have been able to share scan data from dinosaurs in museum collections that I currently cannot get to. Once enough representative taxa have been modelled, we’ll be able to get a detailed look at the different ways in which these animals may have moved. 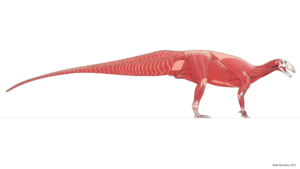 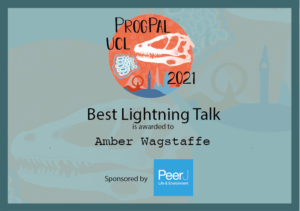 I have always had an interest in anatomy and completed my undergraduate degree in Biology at the University of Sheffield, followed by a master’s degree in Palaeobiology at the University of Bristol in 2018. During this time, I researched extinct kangaroo locomotion and discovered a passion for biomechanics. After a couple of years out of academia, I decided to pursue a PhD with a biomechanical focus, which led me to apply to my current project – ‘The evolution of functional disparity in the avian skull’ with Dr Jen Bright. This project appealed to me as it is heavily focused on anatomy, involves working with museum collections and allows me to contribute to improving our understanding of avian biomechanics, evolution and ecomorphology.

You won the PeerJ prize for Best Lightning Talk at ProgPal 2021 – can you briefly explain the research you presented at the meeting?

The research I presented at ProgPal 2021 focuses on cranial kinesis, which allows birds to move their upper beak relative to the skull. Previously, beak morphology has commonly been associated with diet, partly due to the dissemination of Darwin’s theories on Galapagos finches. Darwin proposed that the size and shape of the different species of finch could be used as a predictor of their diet. Whilst these findings are true for Galapagos finches, more recent study indicates that this relationship is far more complex for the majority of birds. We hypothesise that cranial kinesis may align more closely than beak morphology with ecological correlates such as diet and feeding behaviour. Using four-bar linkage models of the cranial kinetic system, we calculated kinematic transmission (KT), a ratio expressing how the system amplifies motion between the input and output links. We compared these values with data on diet and feeding method.

I have previously attended ProgPal in person and was so pleased that the virtual conference maintained the welcoming atmosphere that ProgPal is known for! Although I missed the ability to socialise and network that only an in-person conference can offer, a lot of effort was put into making the conference friendly and inclusive. One of the best features of the virtual conference was the facilitation of question asking/answering. Each presenter had their own channel for attendees to post questions in – this allowed a greater number of questions than the traditional conference setup and fostered conversation and collaboration between attendees.

I am currently in the early stages of my PhD and the results I presented were of a pilot study, focusing on core waterbirds (Aequorlitornithes). I had hoped to focus on more species in this group, but the pandemic has prevented museum visits to scan more waterbirds. My next steps are to include other species of birds from different groups and continue to quantify feeding methods and develop my four-bar models.

If you are organizing a conference or workshop and would like to offer a PeerJ Award at your event, please let us know – communities@peerj.com