PeerJ spoke to Imogene Cancellare, a conservation biologist and PhD candidate in the Department of Entomology at the University of Delaware about the recently published article Multiscale patterns of isolation by ecology and fine-scale population structure in Texas bobcats.

My name is Imogene Cancellare and I am a conservation biologist and PhD candidate in the Department of Entomology at the University of Delaware. My dissertation research focuses on the evolutionary history and conservation genetics of snow leopards across High Asia. More broadly, my work combines field work and lab work to examine spatial genetic relationships in carnivores. Specifically, I’m interested in understanding how landscapes influence gene flow in wildlife, as this informs conservation action on both the status and connectivity of populations. While my current work focuses on a big cat, my background in both field and lab research began with a smaller felid in the US, the bobcat. I am the lead author on this recent publication on bobcat landscape genetics. This work was the culmination of my master’s research at West Texas A&M University, and this project was conducted by a multidisciplinary team of landscape ecologists and geneticists. 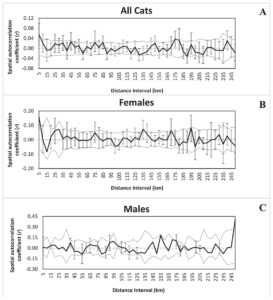 Correlograms illustrating the influence of distance on spatial autocorrelation for all 102 bobcats (A), females (B), and males (C).

The goal of this research was to identify the population genetic structure of bobcats across western Texas. Previous research suggests bobcat genetic populations may meet along the southern extent of the Great Plains, but the extent of their population differentiation is not known. In general, carnivores, especially ecologically generalist species, are not expected to exhibit significant genetic structure, but instead exhibit a genetic pattern known as isolation by distance (IBD), where dispersal and gene flow are limited by distance rather than barriers (individuals close to each other will be more genetically similar to each other than individuals farther away from each other). However, individual habitat preferences can impact spatial genetic relationships even in generalist species. These preferences for certain environmental conditions can reduce gene flow regardless of intervening habitat, resulting in a pattern of isolation-by-ecology (IBE). Because Texas is 97% privately owned, a myriad of landscape types, anthropogenic pressures, and landscape management techniques likely influence the resource availability for this widespread and generalist cat, and could influence how cats are genetically connected across the western portion of the state. From a methodology standpoint, we were also interested in determining what spatial scale would be informative for revealing these spatial genetics relationships, as genetic variation is a function of landscape spatial scale. To do this, we examined correlations between genetic patterns and the landscape at two spatial scales to determine if bobcats show genetic differentiation along habitat breaks. 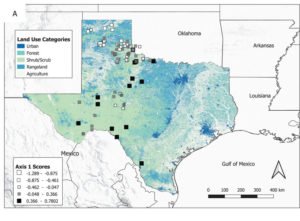 Our results showed bobcat population genetic structure in Texas exhibits a latitudinal cline, which we interpreted as two weakly differentiated genetic populations. Bobcats did not exhibit IBD, suggesting this pattern may be the result of factors other than geographic distance. We used partial redundancy analyses to examine the impact of landscape and environmental variables on observed genetic structure, and found these associations differed by spatial scale. Bobcats exhibited high genetic similarity in similar habitats, and this similarity was correlated with herbaceous rangeland at the fine spatial scale, and mixed rangeland and agriculture at the broad spatial scale. This suggests spatial-use behavior in bobcats impacts genetic similarity within and between populations, and that bobcats may seek out habitats with high degrees of heterogeneous composition.

Previous research across numerous taxa suggests spatial genetic relationships, and the mechanisms that result in this structure, can vary across different portions of a species’ ranges. Multiscale frameworks, then, are beneficial for interpreting genetic patterns on landscapes, particularly where management or conservation action is concerned. While landscape effects on bobcat genetic variation were relatively weak in our study area, our study illustrates how fine-scale analyses across an environmental gradient at multiple scales can identify unique landscape factors important for spatial genetic structure. Incorporating genetic data into wildlife management plans, including for generalist species, is beneficial for long-term population connectivity.

I wanted to publish this work in an Open Access (OA) journal to eliminate the barriers between academic research and learning opportunities, both for researchers at different institutions and for the general public. I learned about PeerJ via a combination of my own reading and via discussions about OA research on Twitter!

PeerJ was very helpful throughout the process, including answering questions and granting extensions. Our team also appreciates being able to publish this work with senior author Dr. Rocky Ward, who passed away in 2019.