Palaeontologists have identified a new 150-million-year-old hybodontiform shark-like chondrichthyan based on a single incomplete skeleton from the Upper Jurassic Kimmeridge Clay Formation of England. PeerJ spoke to Sebastian Stumpf about the recently published article. 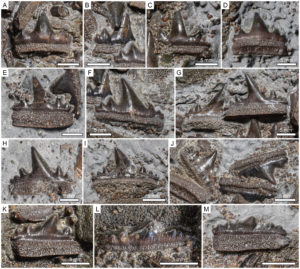 I am a postdoctoral research fellow in the Evolutionary Morphology Research Group at the Department of Palaeontology of the University of Vienna, Austria, working on fossil chondrichthyan fishes and I am particularly interested in extinct hybodontiforms that are shark-like chondrichthyans, their anatomy, taxonomy and systematics. Steve Etches is an important and well-known non-commercial fossil collector based in Kimmeridge, Dorset, England. His lifetime collection is housed and curated in the Etches Collection in Kimmeridge and represents one of the most scientifically significant fossil collections in England. Charlie Underwood is vertebrate palaeontologist at the Birkbeck College, London, with special interest in Mesozoic and Cenozoic chondrichthyans. Jürgen Kriwet is vertebrate palaeontologist at the University of Vienna and head of the Evolutionary Morphology Research Group focusing on the evolutionary history of fishes and vertebrates in general. 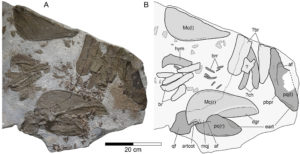 Hybodontiforms, which form the supposed extinct sister group to modern sharks, skates and rays, have an extensive fossil record elucidating a speciose clade of Palaeozoic to Mesozoic shark-like chondrichthyans that have developed diverse dental adaptations in relation to prey and feeding. However, even after almost two centuries of research, much uncertainty still surrounds the taxonomy and systematics of hybodontiforms. This is mainly due to the extreme scarcity of skeletal material, which commonly provides important morphological features for inferring phylogenetic interrelationships. The incomplete nature of the hybodontiform skeletal fossil record consequently precludes deeper insights into their taxonomic affinities in many cases, and therefore any new information about their skeletal morphology potentially increases our knowledge about their evolutionary history and diversity. 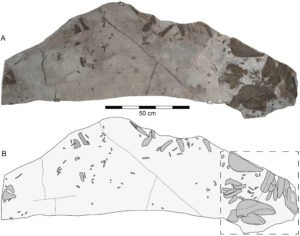 In the present study we describe Durnonovariaodus maiseyi, a new hybodontidorm shark-like chondrichthyan from the Upper Jurassic of southern England based on a single partial skeleton with teeth. Durnonovariaodus maiseyi shows a puzzling combination of dental and skeletal features, providing important new insights into the morphological and taxonomic diversity, as well as the ecology of Mesozoic hybodontiforms.

Durnonovariaodus maiseyi was certainly among the larger hybodontiforms, probably reaching a maximum length of up two meters, and may have predominantly inhabited deeper-water environments, possibly along the outer continental shelves and upper continental slopes. Durnonovariaodus maiseyi is characterized by uniquely shaped multicuspid teeth, including symmetrical anterior teeth were probably used for capturing and handling prey, and asymmetrical lateral and posterior teeth, which more likely performed a cutting function.

Where and when was the fossil discovered? 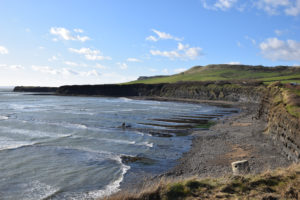 The holotype and only known specimen of Durnonovariaodus maiseyi was found almost 20 years ago and comes from about 150-million-year-old shallow marine deposits referred to the Kimmeridge Clay Formation accessible along the coast of Dorset. The specimen is now held in the Etches Collection, together with additional, but largely undescribed fossil vertebrate material from the Kimmeridge Clay Formation.

Durnonovariaodus maiseyi provides tons of new information for better understanding evolutionary history of hybodontiform shark-like chondrichthyans. However, given the absence of any conclusive phylogenetic framework, the suprageneric identification of Durnonovariaodus maiseyi remains obscure, which can only be countered by conducting more comprehensive comparative studies focusing on hybodontiform species that are presented by dental and skeletal material, pending the re-investigation of historically collected specimens combined with a subsequent phylogenetic analysis utilizing robust cladistic principles.

The scientific importance of the Kimmeridge Clay Formation is underlined by additional, but still undescribed hybodontiform skeletal material also held in the Etches Collection. I am quite sure that the research of the hybodontiform skeletons from the Kimmeridge Clay Formation, which we will continue in the years to come, will certainly contain further surprises and will allow us to better understand how diverse these ancient shark-like chondrichthyans were and why they finally might have vanished at the end of the Mesozoic, about 65 million years ago.

I first heard about PeerJ from lab members, but also different colleagues within the field of palaeontology who published their research in PeerJ as well. I did a peer-review for PeerJ and was impressed by the smooth handling and pretty fast processing.