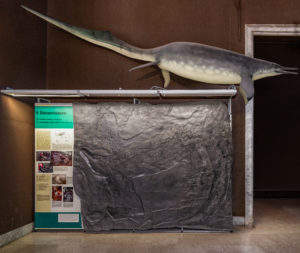 Middle Triassic ichthyosaurs are rare, and mostly small in size. The new Besanosaurus specimens described in the peer-reviewed journal PeerJ – the Journal of Life and Environmental Sciences – by Italian, Swiss, Dutch and Polish paleontologists provide new information on the anatomy of this fish-like ancient reptile, revealing its diet and exceptionally large adult size: up to 8 meters, a real record among all marine predators of this geological epoch. In fact, Besanosaurus is the earliest large-sized marine diapsid – the group to which lizards, snakes, crocodiles, and their extinct cousins belong to – with a long and narrow snout. 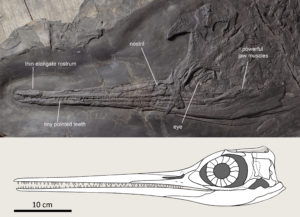 Gabriele Bindellini is a Ph. D student at the Milan University focusing on the Middle Triassic fauna of the Besano Formation, which includes a re-examination of Besanosaurus. Andrzej Wolniewicz did his Ph. D in Oxford with a thesis about Triassic and Jurassic ichthyosaurs. Feiko Miedema is a Ph. D student working on the very large ichthyosaur collection of Stuttgart with a thesis about their ontogenetic development. Torsten Scheyer is senior curator of fossil vertebrates at the Zurich University. He recently worked on the histology on Triassic reptiles, and published in PeerJ – the Journal of Life and Environmental Sciences a detailed article about the bizarre long-necked reptile Tanystropheus. Cristiano Dal Sasso is a vertebrate paleontologist at the Milan Natural History Museum. Since 1990 he worked in the Besano “Sasso Caldo” site, digging out fossil reptiles  – including the most complete Besanosaurus, described and named together with Giovanni Pinna in 1996.

Where are you based?

GB and CDS are based in Milan (University and MSNM), AW in Warsaw (IP PAS), FM in Stuttgart (SMNS), and in Zurich (PIMUZ UZH). Due to the pandemic, we never met together in one place, although we tried to do that several times….

What did you find? Was there anything surprising about your results?

The holotype of B. leptorhynchus, preserved in the collections of the Natural History Museum of Milan and one of the main attractions of the exhibit, was officially the one and only representative of this taxon (Dal Sasso & Pinna 1996). Thanks to our study, we now assign five more specimens to this binomial name: three of them are housed in the Paleontological Museum of the Zurich University (two are also exposed in the exhibit), one is in the Tübingen University, and another specimen, along with the holotype, is in the Natural History Museum of Milan. Each specimen shows elements that make all of them important and informative to properly describe and define this taxon: for example, the holotype is a complete 5.2 m long pregnant female, one of the Zurich specimens exceeds 8 m in length, and the smallest specimen still shows a partially 3-dimensional preservation. Four of these six specimens are also described and figured in our manuscript for the very first time.

GB likes the novel feeding specialization of this Triassic reptile… Besanosaurus itself represents an important ecological novelty in the lineage of diapsids, being the first large-sized marine reptile showing an extreme longirostrine skull morphology.

CDS: “I am emotionally (not only scientifically) linked to Besano since I entered the MSNM in 1990…And I am positively surprised to find out that many observations we published in the first description, dated 1996, are still valid. Also, I am happy to see that the knowledge of this incredible animal is continuously improving thanks to new technologies”.

Where did you find it?

All specimens come from the same rock formation, but it is intriguing that they were unearthed in a long period and under different conditions (from underground mines to scientific systematic excavations), crossing two centuries… and crossing two nations (Italy and Switzerland).

Who should be interested in this area of research & why?

The scientific importance of B. leptorhynchus is proven by the completeness of the specimens here described, the key position in the ichthyosaurian phylogeny and its ecological role during the Anisian. Moreover, this taxon is well-known , being the symbol – along with Cymbospondylus and large nothosaurids of Monte San Giorgio, “the mountain of the dragons”. This work will further increase the fame of this worldwide renowned UNESCO heritage site, and it will be happily welcomed both from the scientific and the enthusiast’s community.

We are happy to say that, interestingly, Gabriele and I started re-studying the Milan Besanosaurus roughly at the same time another team started working on the Swiss specimens. Rather than doing parallel studies, we pooled our data and efforts and pulled on the same string, to enhance our understanding of these fascinating extinct animals.

A second positive thing we learned is that even a historical fossil locality, after 200 years of research, can unveil new exciting specimens.

We like the open source opportunity, the digital format of the journal, and the graphic style of the Journal.

How did you find the process of publishing with PeerJ?