Author Interview: Geology and taphonomy of a unique tyrannosaurid bonebed from the upper Campanian Kaiparowits Formation of southern Utah: implications for tyrannosaurid gregariousness.

PeerJ spoke to Dr. Alan Titus, paleontologist for the Paria River District for the US Bureau of Land Management in Southern Utah about the recently published article Geology and taphonomy of a unique tyrannosaurid bonebed from the upper Campanian Kaiparowits Formation of southern Utah: implications for tyrannosaurid gregariousness.

Could you please Introduce yourself and your co-authors

I’m Dr. Alan Titus, paleontologist for the Paria River District for the US Bureau of Land Management in Southern Utah. I live in Kanab and I was formerly the monument paleontologist for Grand Staircase-Escalante National Monument, where the research that we published was carried out.

My co-authors include Dr. Celina Suarez, an isotopic geochemist from the University of Arkansas; Dr. Joe Sertich, Curator of Dinosaurs at the Denver Museum of Nature and Science; Katja Knoll, who is the laboratory manager for Grand Staircase-Escalante; Dr. Ian Glasspool, geological research scientist at Colby College and our charcoal expert, giving us insights into the burned wood that we found among the dinosaur bones; Dr. Eric Roberts from James Cook University in Australia, Queensland, who is a sedimentologist and helped us put the site into the overall geological context and date; Dr. Daigo Yamamura, who is an instructor at Miles Community College in Miles City, Montana; and Abigail Lukacic and Jonathan Ginouves, who were interns that helped us with all the taxonomy on the bones, assessing the weathering stages, and how advanced the decomposition was on the skeletons before they were buried.

Can you please introduce your research?

The research focused on a Tyrannosaur bone bed: multiple, intergenerational individuals of a single species, including what we estimated to be a four year old, all the way up to a full somatic adult exceeding  20 years in age – and three growth stages in between. Whilst there have been two other similar bone beds found in the Northern Great Plains area in Montana and Alberta Canada,  this is the first in the southern US, and features a taxon that’s endemic to the southern US named Teratophoneus. This is a completely different lineage of tyrannosaur and yet, in our analysis, the features of the site are remarkably similar to the previously reported sites in Montana and Alberta.

The implications of our research are that the animals died as a result of a single mass mortality event rather than through some sort of attritional process and, therefore, we were looking at a standing crop of animals rather than a site that individuals came to over some period of time. You can conclude from this that a standing crop of multi-generational Tyrannosaurs could reflect some sort of parasocial or gregarious behavior i.e. that existing as a group was something they were doing routinely. 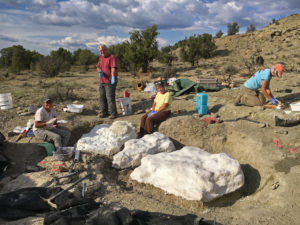 If it was just one site where we had seen this evidence you could argue that this could have been caused through a variety of circumstances – potentially a fire drew them in, or maybe floodwaters washed them from various parts of the floodplain and gathered them in a hydraulic setting where they congregated. But because we now have three of these sites throughout the Western Interior of North America, we believe that such explanations would be a statistically improbable event; if these individual sites were created by circumstance alone and not reflecting behavior of the Tyrannosaurus, that this wouldn’t be such a pervasive pattern. We believe that we keep discovering this pattern because the behavior of Tyrannosaurs created a predisposition for sites like this to exist.

We believe such gregariousness existed in Ceratopsians, which created large bone beds in Montana and Alberta; these huge Centrasore bone beds don’t happen because of isolated Centrasores coming together from various places, they exist because the animals are gregarious. We’re making the same argument for Tyrannosaurus.

What’s next for this research?

In this article we’ve made, essentially, a geological argument that these Tyrannosaurs died as a group; our next step would be to make a biological argument that these Tyrannosaurs were parasocial, behavior similar to wolves or lions living in a pack. Next, we want to make a geochemical and biological argument for this behavioral explanation. Were they living and feeding in the same eco-space, utilizing the same food resources? We should be able to show that by showing stable carbon and oxygen isotope analysis of the growth series, which we haven’t done yet.

This study is interdisciplinary, pulling in charcoal specialists, geochemists,  stratigraphers, dinosaur taxonomists and geologist palaeontologists. We have so much evidence and we wanted it all out on the table for the world to see! We didn’t want to have to gloss over any of it. We wanted people to see the gory details of everything we had done, we wanted this all in one, nice finite paper that people could access.

As a result, it turned out to be 50 published pages, which for a traditional journal is somewhat cumbersome and expensive. PeerJ’s format, color figures and everything else they bring in terms of the published paper made it a logical place for us to take such a volume of results. It worked wonderfully. And the editors were great, everything was timely and there was good communication: we really appreciate the effort that PeerJ made to help us get this out.