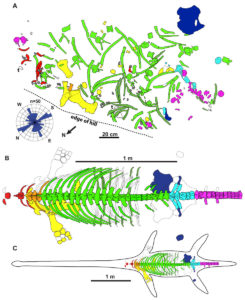 Quarry map and reconstruction of holotype of new genus and species of elasmosaurid.

PeerJ talked to James Campbell about the recently published article “A new elasmosaurid (Sauropterygia: Plesiosauria) from the non-marine to paralic Dinosaur Park Formation of southern Alberta, Canada“.  This was PeerJ’s top most downloaded article of February 2021. James works in the Department of Biological Sciences, University of Calgary, Calgary, Alberta, Canada

Can you tell us a little about yourself and your area of research?

I grew up in Ottawa, where I completed my B.Sc. (2011) and M.Sc. (2014) in Earth Sciences at Carleton University. For my B.Sc. with Dr. Claudia Schröder-Adams, I examined a microfossil (foraminiferal) assemblage, which served to better constrain the age of a mid-Cretaceous marine basin (Eagle Plain Basin, Yukon Territory) – part of the northern end of the Western Interior Seaway. During my fieldwork in the Yukon, I also discovered the first plesiosaur fossil (an elasmosaurid vertebra) from that territory. For my M.Sc. with Dr. Schröder-Adams and Dr. Michael Ryan, I conducted a systematic re-evaluation of the horned dinosaurs Chasmosaurus and Vagaceratops from the Late Cretaceous Dinosaur Park Formation of Alberta and Saskatchewan. In 2015, I started my Ph.D. in the Department of Biological Sciences at the University of Calgary, supervised by Dr. Jason Anderson. For my Ph.D., I studied the osteology and histology of elasmosaurid and polycotylid plesiosaurs from marine and non-marine depositional environments of Alberta, Saskatchewan, and Manitoba. During my Ph.D., my lab mates, supervisor, and I collected and described the oldest dinosaur skeletal remains from western Canada: an ankylosaur osteoderm from an Early Cretaceous (Berriasian) site in the Rocky Mountains of southwest Alberta. Apart from research, I also enjoy camping, running marathons, and playing the bagpipes. 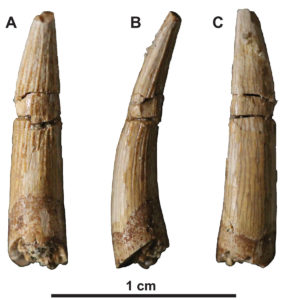 Can you briefly explain the research in your latest PeerJ publication “A new elasmosaurid (Sauropterygia: Plesiosauria) from the non-marine to paralic Dinosaur Park Formation of southern Alberta, Canada”?

Our study describes Fluvionectes sloanae, a new elasmosaurid plesiosaur from the Dinosaur Park Formation of southern Alberta. The genus (Latin and Latinized-Greek) means “river swimmer”, reflecting the environment it inhabited. The species name honours Donna Sloan at the Royal Tyrrell Museum of Palaeontology, who originally discovered the holotype specimen in southeastern Alberta in 1990, and for her long service to palaeontology, both in the field and as the scientific illustrator at the museum.

The holotype specimen of Fluvionectes is estimated to have been around 5m in length, and the largest known specimen may have been closer to 7m, smaller than many species known from marine environments. River life, as opposed to life in the ocean, seems to have limited the size plesiosaurs could reach.

What landscape did they live in?

Fluvionectes inhabited rivers and estuaries that flowed from the growing Rocky Mountains eastwards to the expansive Western Interior Seaway, which divided North America into the microcontinents of Laramidia to the west and Appalachia to the east. It is not known if Fluvionectes spent its entire life in rivers and estuaries, or if it alternated between these environments and the adjacent seaway. Some specimens of Fluvionectes have been found in river sediments that are thought to have been deposited at least 100 km west of the seaway.

What is the age estimate for these fossils?

Fluvionectes lived in the late Campanian (Late Cretaceous), approximately 75 million years ago. This species is known from multiple individuals who lived over a period of several hundred thousand years within the Dinosaur Park Formation.

Where and when was this discovered? 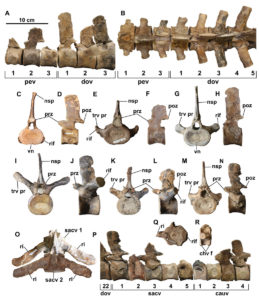 Fluvionectes includes specimens representing eight different individuals, which were collected in southern Alberta (Sage Creek Provincial Grazing Reserve and Dinosaur Provincial Park) between 1898 and 2010, including the first elasmosaurid remains to ever be described from Canada by Lawrence Lambe in 1902. The holotype specimen, initially discovered by Donna Sloan of the Royal Tyrrell Museum of Palaeontology, was rediscovered in 2009 by Wendy Sloboda as part of the Southern Alberta Dinosaur Project, led by Dr. Michael Ryan and Dr. David Evans, and collected and prepared by staff at the Royal Tyrrell Museum of Palaeontology in 2012–2013.

Would you recommend PeerJ to your colleagues?