Every scientist transitions through the initial phases of their career as an early career researcher. It is a challenging career phase, marked by numerous transitions, short term contracts and a lot of uncertainty. In addition, navigating this phase as women in marine science can bring extra challenges of its own. To provide guidance and advice, the brilliant Dr. Suchana Apple Chavanich, Dr. Lisa Levin, Dr. Patricia Miloslavich, and Dr. Amanda Bates accepted our invitation to be panellists in a forum specifically for female early career researchers at the 5th World Conference of Marine Biodiversity. During an online panel discussion with over seventy participants, they answered moderator and audience questions relating to women’s early careers in science. The four accomplished panellists shared their own experiences and thoughts on the early career process. 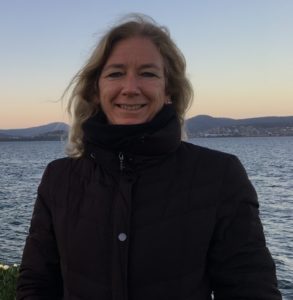 What was your path from early career researcher to the permanent academic position you now hold?

The panellists shared their journey from their PhDs to their current position, which included overcoming challenges like moving to different places and failed job applications. Dr. Bates said she wanted to travel the world, so had some breaks from academia, but she always ended up returning to science. Dr. Miloslavich did not have such gaps, but moved to a number of different countries for postdocs and research, while raising her three children with her husband. Dr. Levin changed to a slightly different field, from zoology to oceanography, after working as a consultant and realizing she was much happier in science. From their answers, it was clear that it can be hard to make decisions such as coming in and out of academia, moving places and changing fields, but the answers of all panellists echoed the essence of what has really driven them through their journeys: a passion for science.

How have you balanced life with your career?

Women in particular face a lot of pressure to balance life and career, and women scientists are no exception. The panellists agreed that it is hard to balance having enough time for your kids, spouse, students, and research, but Dr. Levin emphasized that it is important to not be hard on yourself and to understand that you are doing the best you can. Dr. Miloslavich added that having a supportive partner is important, but that Moms are priceless when it comes to childcare. She acknowledged that when your children are young it can be difficult to balance your life and your career, but she also said that, “It isn’t going to be easy, but it can be done.” Dr. Bates added that it is important to know yourself and to put energy into what is important for you, so you can enjoy those things.

What would be important on a CV for getting a postdoc? 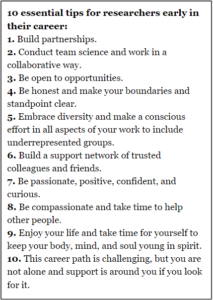 A central piece of advice from panellists was to be open to opportunities and work in a collaborative way. The panellists suggested that building relationships, being open to opportunities, and making sure to work in a connected, networked way is essential. Dr. Bates also suggested that you often can’t predict what someone is looking for by the job description. She encouraged recent grads to explore many career options in different sectors.

Do you have any advice for people that are trying to move from the postdoc loop to a permanent position?

The panellists highlighted the importance of multidimensionality in this context. Dr. Levin advised accepting opportunities that give you new skills, especially if you have multiple choices available to you; choose the ones that add something new to your skillset. She added that, “After all, a range of skills could lead to your dream job.”

In times where you felt it was hard to be a woman in academia what kept you going?

It can be hard being a woman working among male colleagues, and Dr. Chavanich agrees with that. But she said that she was inspired by Sylvia Earle, and that having role models, as well as using whatever support from resources available in your institution can help. Dr. Levin said that there was not much institutional support when she was an early career researcher, and that women used to sacrifice everything, including family, for their careers. However, she had a close group of female friends that supported each other. Thus, regardless of where support is coming from, it is key to face those hard moments, and reach out for support – nobody should feel alone.

The audience brought to the discussion a recently retracted article that suggested female mentorship can negatively affect career paths, both for mentors and mentees.

Dr. Bates responded by emphasizing that people can have a great mentorship relationship regardless of gender. She went on to say that we often look for people we want to emulate and, as women, we sometimes look to other women. She mentioned she has had both male and female mentors that have helped her in different ways.

How can we be more inclusive and diversify science in general?

A conscious effort to include underrepresented groups was highlighted as essential across the panellists. Diversity is something that we should consciously include in everything that we do since it is such an important, cross-cutting theme. The panellists emphasized the importance of enhancing the participation of underrepresented groups in all facets of our work as scientists, such as in guest lectures, working groups, publications, who we cite etc.

How do you deal with patronizing comments from male colleagues?

Early career researchers and especially women and minorities, often have to deal with patronizing comments. Whilst the panellists say there is no single answer for how to respond to being patronized, they highlight that responses need to be tailored to the situation, such as if you are being patronized by a professor, a colleague, or your advisor. Yet, regardless of the source, being honest and making your boundaries and standpoint clear, whilst remaining respectful was advised.

What can we do to be more inclusive of non-native English speakers?

As a non-native English speaker, Dr. Chavanich recognised how important it is to allow ourselves to be exposed to foreign scientists, and to eventually get in tune with different accents. She highlighted that collaboration with other countries is important, so we have to network and break the language barrier to move our research and career forward. She said that, in her experience, exposing herself to work more often with foreigners made communication become easier than expected. On the other side of the spectrum, Dr. Levin advised native English speakers to be conscious of the speed that they normally talk at, and give space for foreign speakers to talk as well.

Did you have to sacrifice anything throughout your career?

This question was answered first by Dr. Bates by advising attendees to decide what is most important to them. She shared that she was one of the first people in Canada to be given maternity leave and she was extremely grateful for that. She also shared that she spaced her kids out by 6 years which helped with her career. Dr. Levin shared that she luckily did not have to sacrifice anything for her family but that she regrets that she has not been to Antarctica.

If you had one piece of advice to early career researchers, what would it be?

When asked about one piece of advice for early career researchers, panellists agreed that being passionate, positive, and confident is critical. The panellists mentioned that it is important to be confident in your work, know your own worth and sustain a positive attitude. Dr. Chavanich added that having the skills to take great photos of your work is very important for scientists right now. To round the question off, Dr. Levin advised to be compassionate and take time to help others, which in some way, will have a big impact on yourself and others.

Any last-minute words of advice, specifically for women in science?

The session closed with some final words by Dr. Miloslavich who said: “Your body is strong now and you have the ability to do things that you won’t be able to do in 20 years; enjoy your life, do sports, dance, read, go hiking, take time for yourself and keep your body young in spirit as long as you can.”

Dr. Suchana Apple Chavanich is an Associate Professor at the Centre of Excellence for Marine Biology at Chulalongkorn University in Thailand.

Dr. Lisa Levin is a Distinguished Professor at the Centre for Marine Biodiversity and Conservation at the Scripps Institution of Oceanography in San Diego (USA), and a founding member of the Deep-Ocean Stewardship Initiative.

Dr. Patricia Miloslavich is the Executive Director of the Scientific Committee on Oceanic Research (SCOR), based at the College of Earth, Ocean and Atmosphere at the University of Delaware, USA.

The 5th World Conference on Marine Biodiversity: on schedule and online