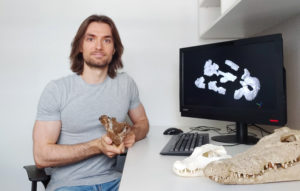 PeerJ talked to Jorgo Ristevski about the recently published article ‘Australia’s prehistoric ‘swamp king’: revision of the Plio-Pleistocene crocodylian genus Pallimnarchus de Vis, 1886′. Jorgo is a PhD student at The University of Queensland.

I am a PhD student at The University of Queensland, studying extinct crocodylians from the Cenozoic Era of Australia. More specifically, I investigate their morphology, taxonomic diversity and evolution. Some of the methods I utilize include descriptive and comparative anatomy, segmenting data obtained from computed tomographic (CT) scans, and I also perform phylogenetic analyses. My PhD supervisors are Dr. Steven Salisbury (my principal supervisor), and Dr. Gilbert Price.

The study published in PeerJ forms part of my PhD thesis, and it describes a new crocodylian genus and species from the Plio-Pleistocene of Australia. It began as an anatomical study of a well-preserved skull, and eventually expanded into investigating the taxonomic status of the crocodylian Pallimnarchus pollens. Pallimnarchus pollens is the first binomial name given to an extinct crocodylian from Australia. It was coined in 1886, and assigned to several fossil fragments found in southeastern Queensland. The usage of the binomen Pallimnarchus pollens became widespread during the 20th century, and for a long time was applied to many crocodylian fossils found in Australia. However, the fragmentary nature of the fossil specimens referred to Pallimnarchus, especially the original material described in 1886, has led to confusion as to what should and should not be referred to this genus. So, to try and determine what can legitimately be referred to Pallimnarchus pollens, we had to examine its type specimen. A type specimen is crucial for a species, and must possess unique features (called autapomorphies) to help compare with other specimens in order to demonstrate if they are the same species or not. Unfortunately, the type specimen of Pallimnarchus pollens (an incomplete lower jaw) is missing – it got lost sometime in the late 1990s or early 2000s, and all that has been recovered of it is a tiny fragment. We then checked old publications that contained descriptions and black and white photographs of the now missing type specimen, but they offered no indication of any autapomorphies in it. With a type specimen that is both missing and lacking autapomorphies, the conclusion was that Pallimnarchus pollens is not a valid name. 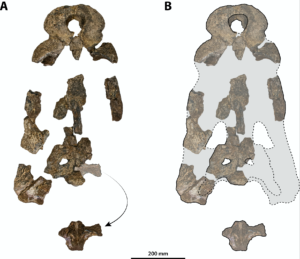 The skull I studied had several distinguishing features, and was well suited to be a type specimen for a new genus and species. Therefore, we named the new genus Paludirex (a name that my co-author Dr. Adam Yates came up with), which means “swamp king” in Latin. The name of the species, vincenti, is in honor to the late Mr. Geoff Vincent, a fossil collector that discovered the type specimen back in the 1980s. I studied the type specimen skull of Paludirex vincenti not only by observing its external features, but also from data obtained via CT scanning. Thanks to the CT data, I was able to reconstruct some endocranial (meaning inside the skull) structures, such as part of the brain endocast, cranial nerve canals, and vascular canals. This marks the first time that endocranial elements are described from CT scans for an extinct Australian crocodylian.

I have known about PeerJ for several years thanks to the many papers published there that are relevant to my field of study. I also like the style of the journal and the fact that it is open access. Last but not least, I have been a manuscript reviewer at PeerJ before, and my first-hand experience as a reviewer there further informed me of the high standards the journal is devoted to.

The submission process was simple and straightforward. Thanks to the editor and the four reviewers, the review was quick and efficient, but more importantly, it was rigorous – the latter aspect is essential in ensuring that high-quality scientific work is being published.