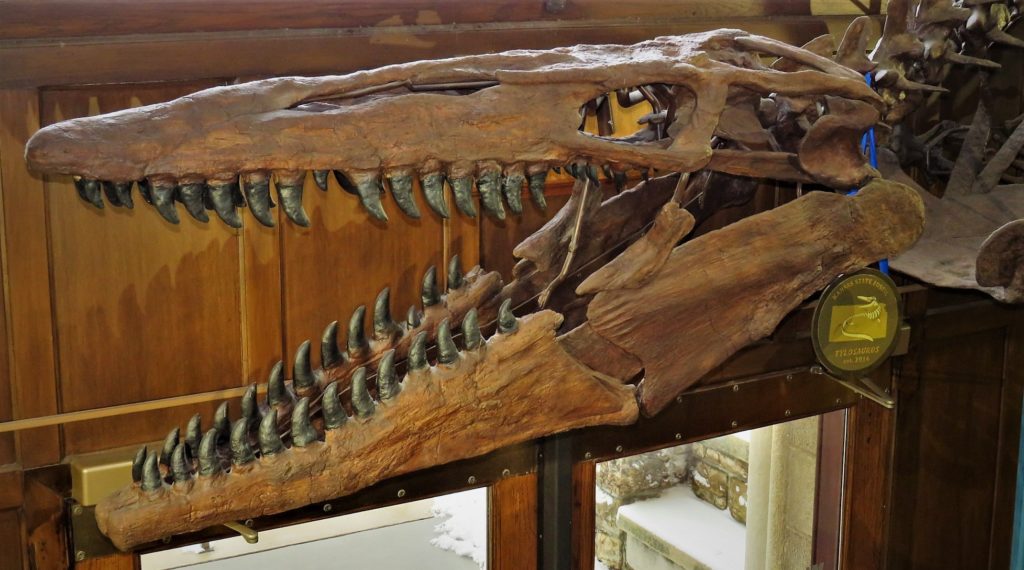 PeerJ talked to Amelia Zietlow about her recently published article “Craniofacial ontogeny in Tylosaurinae”. Amelia is a PhD student at Richard Gilder Graduate School at the American Museum of Natural History.

I am a first year PhD student in the Comparative Biology program at Richard Gilder Graduate School at the American Museum of Natural History (New York, NY). For my dissertation, I will continue to study the ontogeny and evolution of mosasaurs and their living relatives (lizards & snakes). This work is based on my undergraduate thesis in Biology at Carthage College (Kenosha, WI).

Mosasaurs were fully aquatic lizards that lived at the end of the age of dinosaurs, and although their fossils have been studied for over 200 years, their ontogeny (growth & development) remains understudied. This work analyzed ontogeny in three species of Tylosaurus (T. kansasensis, T. nepaeolicus, & T. proriger), large-bodied mosasaurs that inhabited a warm, shallow sea that once covered the western interior of the North America. Growth patterns were recovered using cladistic analysis–usually used to recover evolutionary trees–because ontogeny, like evolution, consists of an ordered accumulation of changes. This method recovers a growth series consisting of many detailed growth stages rather than lumping multiple individuals into vague “bins” (e.g., “juveniles,” “adults”), and has been used before in dinosaurs (e.g., Tyrannosaurus rex [https://peerj.com/articles/9192/], Centrosaurus apertus [https://peerj.com/articles/252/]), but never in any marine reptile group.

My study included 79 Tylosaurus specimens, 50 of which I studied first-hand at five North American museums. I found evidence to support a previous hypothesis that T. kansasensis are actually immature T. nepaeolicus. I also proposed, tested, and supported a novel hypothesis that T. nepaeolicus evolved into T. proriger over time by extending the development of certain skull bones and growing much bigger (i.e., anagenesis driven by peramorphy). I found 11 growth changes shared by T. nepaeolicus and T. proriger, including the development of a knob-like snout–the feature after which Tylosaurus (“knobbed-lizard”) is named, suggesting that younger individuals lacking this trait may be misidentified.

Studying ontogeny provides an opportunity to learn about mosasaur biology and, since changes to development have evolutionary consequences, can potentially provide clues about their evolution. Like whales, seals, plesiosaurs, and many other amniotes, mosasaurs evolved from terrestrial ancestors. Future work comparing ontogenetic patterns across many different species, including semi-aquatic ancestors, will help identify the ontogenetic changes that facilitated the land-water transition in this lineage. 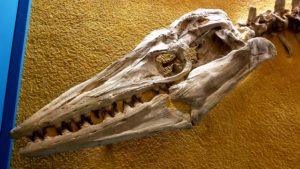 It was surprisingly difficult to track down the real skull of one of the largest mosasaurs ever found, the “Bunker” specimen (T. proriger KUVP 5033)! The cast of Bunker – its skull nearly 6 feet long and its body close to 45 feet (for scale, that’s larger than SUE, the Field Museum’s T. rex!) – hangs in the entryway to the natural history museum at Kansas University (Lawrence, KS), but the whereabouts of the real fossil within KU’s many collections spaces were unclear. In fact, Bunker was previously absent from the scientific literature beyond brief mentions of its large size, and the only photos I had seen of the real fossil (and not the cast) were of two isolated skull bones.

When I arrived at KU, the collections manager informed me that they had found its skeleton, but not the skull. One skull in the museum’s mosasaur exhibit initially caught our attention, since it was particularly large and did not have a conspicuous specimen number, but we later found an article identifying it as a different individual. So, at the end of the day, we went to a different collections space separate from the museum, and searched the drawers and shelves near Bunker’s limbs, ribs, and vertebrae. I finally noticed one of the two skull bones I had seen photos of, and, on the shelf beneath them, I beheld a skull significantly larger than any I had ever seen before. After a quick photograph & an email sent to another mosasaur paleontologist, my suspicion was confirmed: we’d found it. Bunker is an impressive individual – a true “lizard king,” if you will – and I am incredibly happy that I was able to include it in this study. 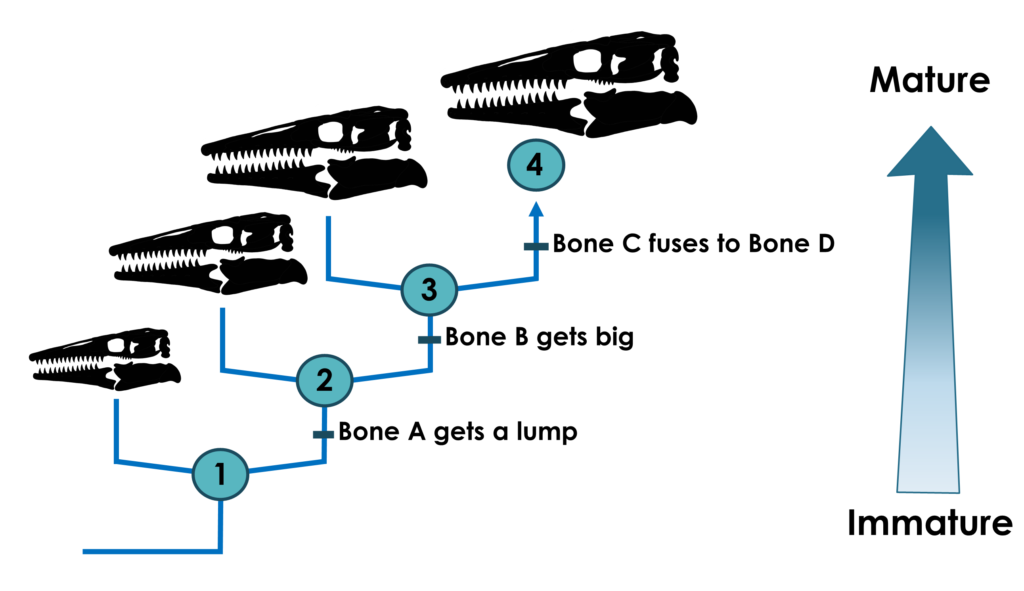 Ontogeny is complicated! In fossil species, it is particularly difficult to discern whether two morphologically similar individuals are different species or different growth stages of a single species. Size alone is not reliable for assessing relative maturity (for example, there’s no way to know how mature a person is based on how tall they are), and morphological data must be assessed objectively to minimize the potential for results to be influenced by personal biases. Finally, it is also important to note that growth series and evolutionary relationships are ultimately hypotheses, and that they can always be further tested and refined with additional data–in this case, additional growth characters from the skeleton, stratigraphic data, and more specimens.

My undergraduate advisor, Dr. Thomas Carr, submitted a manuscript to PeerJ and told me about his experience with it. I was persuaded by how easy it was, how little time the whole process took, and by the fact that the article would be open access.

Everything went very smoothly. The submission process was easy to navigate, and the entire process moved incredibly quickly (only about four months from submission to publication). The review process was great, both the editor and reviewers were very helpful, particularly in highlighting aspects of the method that required clarification, and I like that the review history is public in case readers are interested in more detailed descriptions and justifications of the methods.